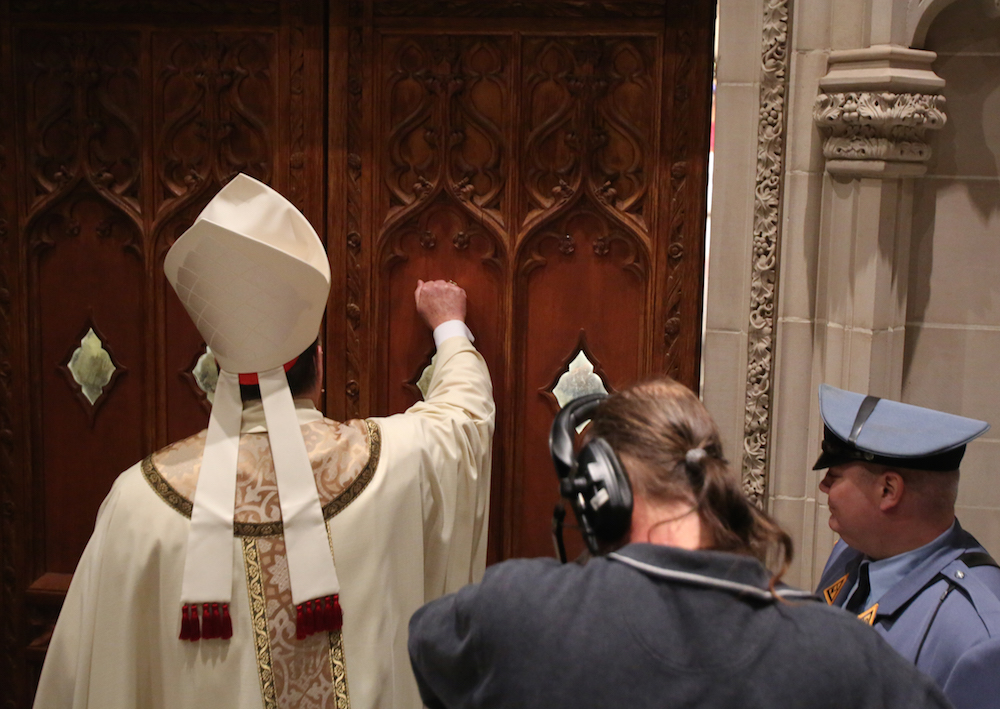 Cardinal Joseph Tobin knocks on the doors at the Cathedral Basilica of the Sacred Heart in Newark, New Jersey, to begin his Jan. 6, 2017, installation Mass. (CNS/Bob Roller)

Doors are powerful symbols in the church. At his installation, a newly appointed bishop raps on the cathedral door three times with his crosier, symbolically taking possession of the church. The major basilicas in Rome have "holy doors," which are normally sealed from the inside and are only opened for pilgrims during years of jubilee designated by the pope, such as the recently concluded Year of Mercy declared by Pope Francis.

Scripture, too, references doors quite often. In Matthew's Gospel, Jesus instructs his followers to pray quietly behind shut doors. Matthew also includes the instruction to "knock [presumably at a door], and it will be opened to you."

The Acts of the Apostles have several accounts of angels flinging open locked doors (and loosening chains) so Peter, Paul and others can escape harm, punishment and death. In John's Gospel, Jesus calls himself "the door for the sheep." The New American Bible Revised Edition translates that as "gate," but the point is the same.

When Paul and Barnabas returned to Jerusalem from their missionary trip to Lystra, Iconium, Antioch, Pisidia, Pamphylia, Perga and Attalia, "they called the church together and reported what God had done with them and how he had opened the door of faith to the Gentiles" (Acts 14:27).

Irish parish priest Fr. Roy Donovan picks up on the door image to describe the state of the church:

The grain stores are full of food but locked away behind "guarded" doors while the people outside starve. We have the solutions. The grain is there but the people are not fed. We are starving people of the richness and nourishment that women can bring. We prefer an exclusive priesthood which is dying out due to a lack of numbers. Women will not harm the church and yet we are unwilling to let them in. Why are men not willing to share the priesthood? Why do men believe women are not worthy of this?

The image of the spiritually hungry left standing at the closed door of a storehouse filled with grace is not uniquely Irish. An NCR reader in a California diocese recently wrote the newspaper with the information that his community was foregoing daily Masses because the parish's full-time pastor had been incapacitated with an unexpected chronic illness and the retired priest who helps out has limited capacity. According to the letter writer, the pastor's illness makes even weekend Masses an endurance test and not a celebration.

Given the growing numbers of aging clergy in the church, Catholics will be witnessing this situation with increasing frequency.

The letter writer also adds that his parish has members who are validly ordained priests but are prevented from leading the community because they have married. The church hierarchy "would rather have no Eucharist than one celebrated by a married or widowed priest," the letter writer says. "And they do it with a straight face as if they are right."

We would add that very likely in that same congregation are a large number of equally qualified and capable women who could be called into ministry but are not — only because they are women. 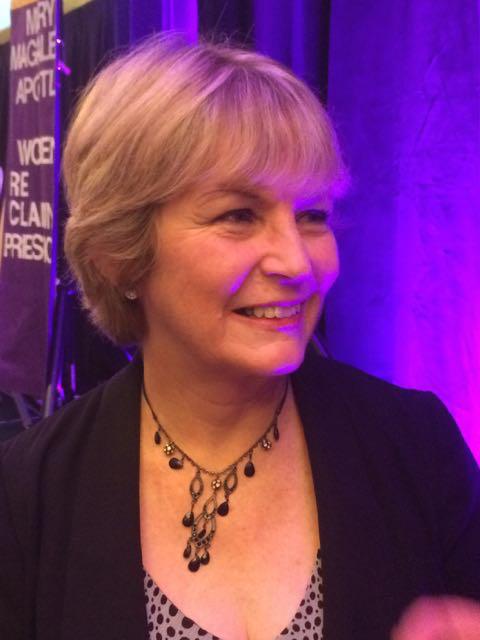 Though the church exhibits "a keen awareness of the extent to which women have been victims of injustice, violence and oppression," she said, the Vatican has increasingly found itself in opposition to international and local movements calling for greater rights for women and children. The reason for this, of course, is the official church's inability to move away from the traditional teaching on the distinctions between male and female that has formed Catholic theology over centuries.

"It invites renewed reflection on what it means to say with St. Paul that, 'There is neither Jew nor Gentile, neither slave nor free, nor is there male and female, for you are all one in Christ Jesus,' " she said. 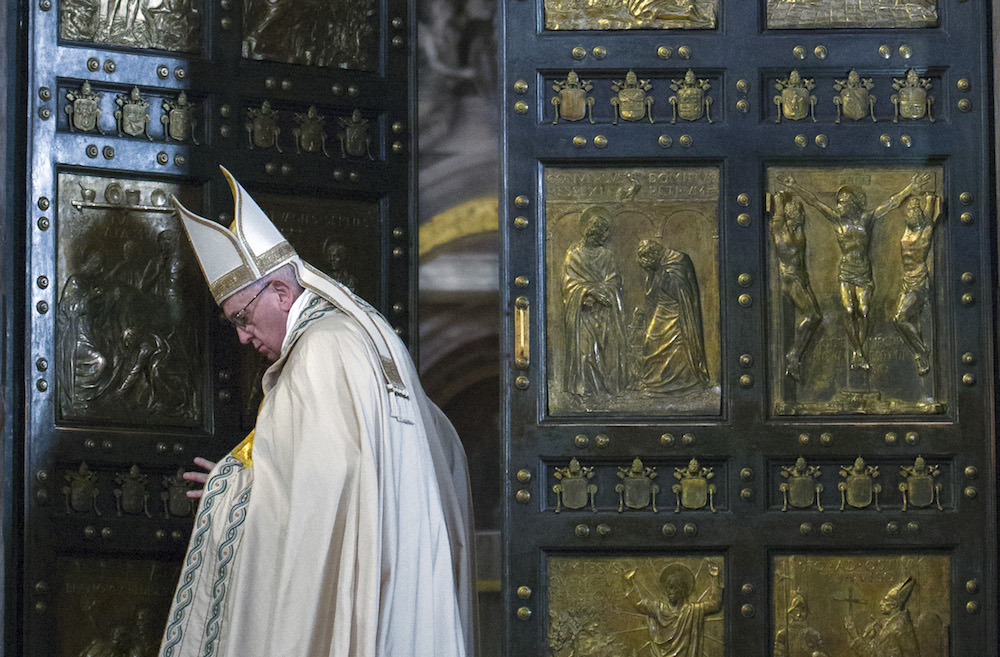 Pope Francis closes the Holy Door of St. Peter's Basilica before a Mass to conclude the Extraordinary Jubilee of Mercy at the Vatican Nov. 20, 2016. (CNS/Maria Grazia Picciarella, pool)

Beattie, who was speaking only a week before Pope Francis visited Philadelphia for a World Meeting of Families, concluded her talk with contrasting statements Francis has made that draw on that powerful symbol of doors.

In his 2013 apostolic exhortation, Evangelii Gaudium, Francis wrote: "The church is called to be the house of the Father, with doors always wide open. One concrete sign of such openness is that our church doors should always be open, so that if someone, moved by the Spirit, comes there looking for God, he or she will not find a closed door."

By contrast, Beattie pointed out, with regards to the ordination of women, Francis says, "The church has spoken and says no. … That door is closed."

That "no" is not acceptable to Donovan, to Women's Ordination Worldwide, and to countless hosts of other faithful Catholics. They are standing at the door, rapping, waiting to take possession of their church, praying for an angel to break the locks and fling open that door.