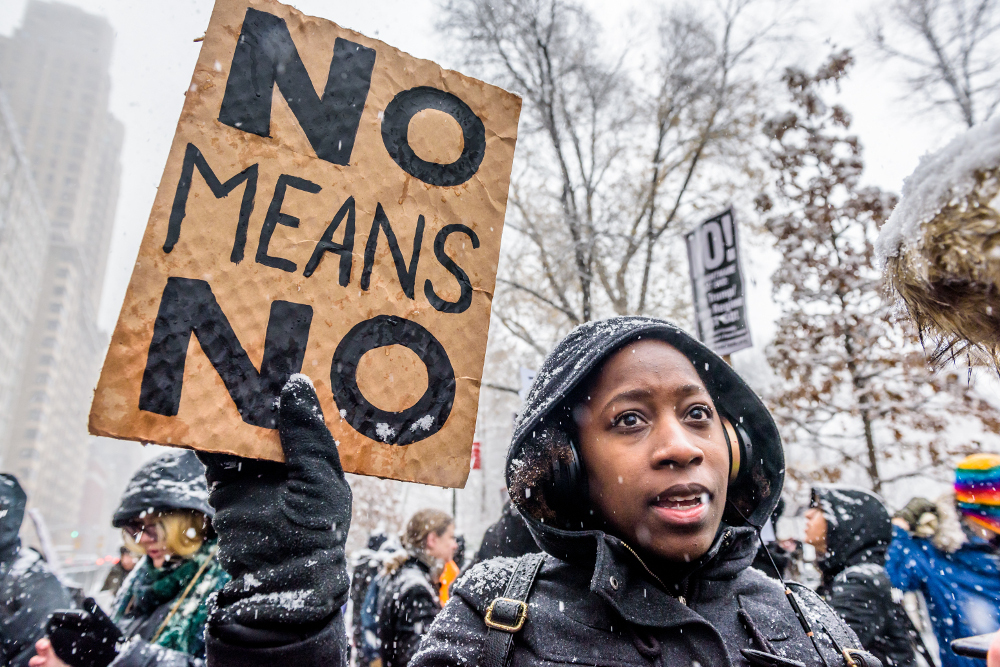 The #MeToo rally took place outside the Trump International Hotel at Columbus Circle on Dec. 9. (Photo by Erik McGregor)

In our legal system, we presume an accused person to be innocent until someone can prove otherwise. In the case of sexual assault, violence or harassment, that means the burden is on victims to prove their trustworthiness. Often, in those cases, we are asked to choose sides based on the stories of the only two people involved — the accuser and the accused. In the post-Weinstein milieu we are now experiencing, one is a woman and the other a man who holds some level of power. In a different conversation, the victims have been children and the powerful accused have been priests.

It's difficult to prove sexual assault — much less harassment — in a court of law, especially in a case of "she said, he said." Because the "he" is innocent until proven guilty, the "she" bears the burden of proof. (We choose to use as default language "man" for the accused and "woman" for the victim, because while men are also victims of sexual assault, the rate of incidence for men compared to women is very small.) Having documentation and corroborating witnesses helps, as does finding other women to tell similar stories. But lacking hard evidence puts many women in the role of defendant.

The problem turns even more daunting when the man holds a position of power, such as a supervisor, a senator, a celebrity or a Catholic priest. The refrain of "no one will believe you" rings in the ears of women who have been harmed by such men. Often, the women are not even sure they should be believed, especially if they fault themselves (wrongly) for the actions of someone else.

Right now, at least, it does feel as if women are being heard. Matt Lauer of NBC's "Today" show, was fired a day after a woman colleague said he had exhibited inappropriate behavior toward her. From all accounts, NBC executives acted quickly to listen to the woman and to let Lauer go.

His on-air partner, Savannah Guthrie, summed up the issue well. She called Lauer "my dear, dear friend and my partner." But she went on to say "we are grappling with a dilemma that so many people have faced these past few weeks: How do you reconcile your love for someone with the revelation that they have behaved badly? … This reckoning that so many organizations have been going through is important, it's long overdue and it must result in workplaces where all women, all people, feel safe and respected."

We agree. Women, children, anyone who has been abused or who has felt some sexual pressure by a person in power must be shown the respect of our trust. They must feel confident that if they tell their stories, people will listen. Moreover, they must be able to draw from that sense of public trust in finding the strength to push back when faced with an ugly situation.

The default reaction must be to trust the victim. Will there still be false accusations? Of course there will, although according to the limited amount of research on this issue, false accusations occur in fewer than 10 percent of reported cases. But we must also move beyond the "told you so" mentality that allows the occasional false accusation to cast a shadow on all claims of inappropriate behavior. It is more important that society listen when someone musters the courage to stand up and say, "I've been wronged, I was uncomfortable, I was hurt."

Those of us who were in the workplace in 1991 during the Senate hearings on Anita Hill's revelations about Supreme Court nominee Clarence Thomas remember the changes wrought by her willingness to tell her story and to face questioning and skepticism from a panel of powerful men. Office executives, suddenly fearful of lawsuits, ordered employees to undergo "sensitivity training" and to learn the definitional difference between sexual harassment and a hostile work environment. "Nudie" pictures came down, and men and women tried to figure out where the lines were drawn.

The Hill hearings heightened our awareness that certain behavior is inappropriate in the workplace, but they did little to encourage women to speak up or to fight back. On the contrary, watching the torment Hill endured as she stood up for herself underscored the reality of what happens when you dare to confront the powerful.

Once again, we are at a watershed moment when it comes to discussing sexual violence and violation. The story behind Time magazine naming as 2017 Person of the Year "The Silence Breakers" illustrates the pervasiveness of this issue across industries, institutions and classes. Now is the time for all of us, but especially for institutions and workplaces, to seize the societal shift these individual stories are creating, to change policy, to trust the accusation first, and to ensure a safe atmosphere for open conversation.

At the same time, it's imperative that we take a hard look at power — who holds it and to what degree. As long as we ascribe a level of untouchable power to certain career positions, the unpowerful and vulnerable will remain voiceless. Let's take advantage of this moment where at least some women are finding and using their voices to work toward a more equal existence for all of us.