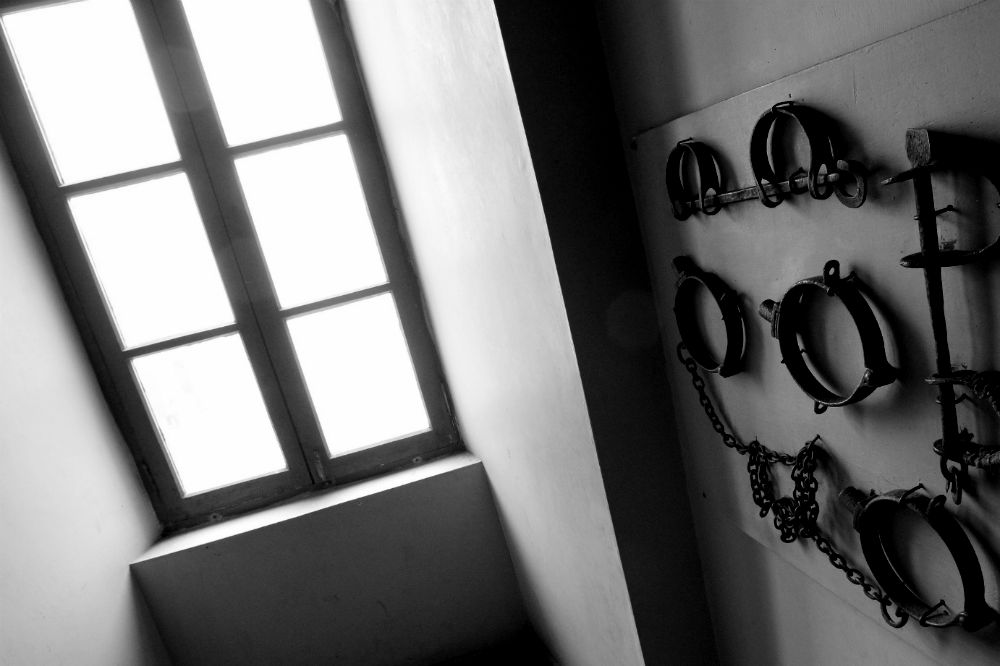 Shackles used during the slave trade are displayed at the Cape Coast Castle Museum in Cape Coast, Ghana, Aug. 28, 2010. Established as a fortress for the trade of gold and other valuable resources, the castle was later used as a dungeon for holding slaves before their transfer to the Americas. It is estimated that around 1 million slaves were transported from what is now Ghana to the Americas between the 1600s and the middle of the 19th century. (CNS/Nancy Wiechec)

"Ultimately, my goal is to subvert the common perception of 'black history' as somehow separate from American history and to reinstate it as indivisible from the totality of past social, political and economic occurrences that make up contemporary American culture."

The words are displayed by Hank Willis Thomas, one of the artists whose work appears in "30 Americans," an art exhibition from the Rubell Family Collection that debuted in December 2008 and has been making its way around the country since 2011. "30 Americans" was recently on display at the Nelson-Atkins Museum of Art in Kansas City, Missouri, a few blocks from NCR's headquarters.

It is, however, an idea that moved well beyond the bounds of a museum description with "The 1619 Project," an undertaking of The New York Times that might well go down as a publishing landmark under the heading of bold truth-telling.

The title itself requires a reconsideration of American history, of the founding era, of the presumptions that undergird how we think of ourselves as individuals and as a nation.

The project bares a history, the beginnings of which is marked by the sale 400 years ago of the first Africans into slavery in the new world, thus 1619. It is a history that has been horribly distorted and purposely hidden and ignored but one that keeps poking through the national façade of tranquility.

The tranquility, of course, has been shattered repeatedly in recent years with racist language from a president who manages to see "good people" among white supremacists and who has been unrestrained in his use of vile descriptions, wholly unsupported by actual evidence, of masses of immigrants.

One can only imagine that the façade has been so ripped apart that we're now able to see the extent of the danger should we approach the logical conclusion of the Trumpian/far right ambition. Perhaps we've gone so far down that dangerous path that the emergence of soul-searched truth is inevitable. Perhaps the torrent of presidential lying, the level of which suggests some much deeper disturbance than a wish for political advantage, has created a counter-reaction, an unprecedented appetite for the truth. 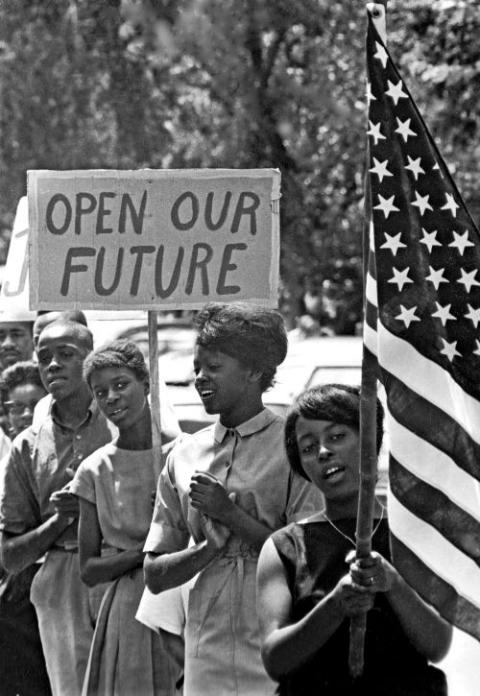 Whatever the forces propelling it, "The 1619 Project" leaps light years ahead of the normal considerations of race in the United States, not through analysis or speculation about causes or wishes about what might be, or considerations of white privilege. Rather it deals unflinchingly and in minutely researched detail, with what was, and that becomes integral to consideration of what we've become. Slavery is in almost every detail of who we are — accounting systems,Wall Street; sugar and pecans; voter suppression and traffic jams in Atlanta.

The fundamental declaration of the underlying reality proceeds in in-your-face big, bold letters, the primary essay in the magazine: "Our founding ideals of liberty and equality were false when they were written. Black Americans fought to make them true. Without this struggle, America would have no democracy at all."

In other words, if you start the history lesson on the founding of the country at 1776, you've already got it wrong. Start with 1619. That sale represented "the beginning of American slavery. The first humans sold into bondage here were among "the 21.5 million Africans who would be kidnapped from their homes and brought in chains across the Atlantic Ocean in the largest forced migration in human history until the Second World War. Almost two million did not survive the grueling journey, known as the Middle Passage."

Those first 20 to 30 slaves would be followed by 400,000 others sold into bondage in the United States before the abolition of the international slave trade. It is persuasively argued — not for the first time in this magazine, but gathered altogether in a compact accounting, with unusual force — that that sale represented the foundational act that would eventually enable a feeble new nation to become an economic marvel. Without slavery, our history would have been dramatically different.

It might be further extrapolated for mainline religious groups that without the later civil rights movement, an incremental step toward truth, this country would not have its most resounding example of religious nonviolence and civil disobedience in the pursuit of justice.

The New York Times, of course, doesn't need our support. It is the behemoth of publications with unparalleled resources. It has also been a very white organization, reflective of the presumptions of white privilege and power that its August 18, 2019, magazine examines as cause and residual effects of slavery.

Thus it is no small matter that it would turn over an entire magazine to the searing reality — the history of brutality and exploitation so often glossed over and romanticized — that have deeper roots in the American reality than our founding documents.

Nikole Hannah-Jones, a magazine staff writer and 2017 MacArthur Fellowship grant winner who pitched the idea and wrote the lead essay, had this to say about the undertaking: "I have spent every moment of this project aware of what it means to be doing this in The New York Times. It's very powerful, and it's very fraught at the same time." 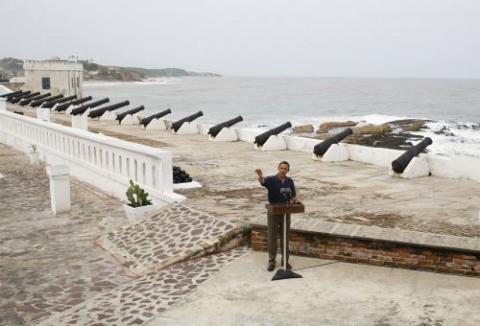 President Barack Obama speaks to the media following his tour of the Cape Coast Castle, a former slave holding facility, in the town of Cape Coast, Ghana, July 11, 2009. (CNS/Reuters/Jason Reed)

And it is timely, the kind of truth-telling essential at a moment when facts and fantasy have become fungible. The bottom line: These are ugly realities that have resonance in nearly every corner of contemporary life in the United States. They need to be taught as an irreducible element of our history. To that end, The Times has printed hundreds of thousands of extra copies distributed free to libraries, museums and schools. Additional materials are available, including podcasts and a broadsheet page by Hannah-Jones on the subject for kids. The publication has also produced, in partnership with the Pulitzer Center, a curriculum to be distributed in schools across the country.

Demand that your school — public, private, Catholic or other religious institution, charter or home — include the curriculum as a required course of study.

"Almost every work on display is in some ways an argument with the basic organizing principle of the exhibition," wrote culture critic Philip Kennicott in The Washington Post when the traveling exhibit by African American artists opened in the nation's capital in 2011. "Far from being simple exemplars of African American art, the works in '30 Americans' range from parodies of that idea to direct confrontations with efforts to categorize, define and contain racial identity."

The review went on in an almost agonized questioning of intent and motive and how art deals with race "when everyone acknowledges that there is no agreement about what race means, or should mean, [that what matters] is the work that resists to the very end, that refuses to participate, that bears some final trace of something elementally human, whatever that means."

The questions seem almost quaint given what has occurred in the eight years since. They were, perhaps, questions that made sense as we lived through two terms of a black president. But we're seeing how quickly things can unravel in just two years of a White House engaged in race baiting. We're well beyond the time for delicate questions and academic hair-splitting. It is time for bold truths.

A version of this story appeared in the Sept 6-19, 2019 print issue under the headline: 1619 Project: landmark truth-telling.