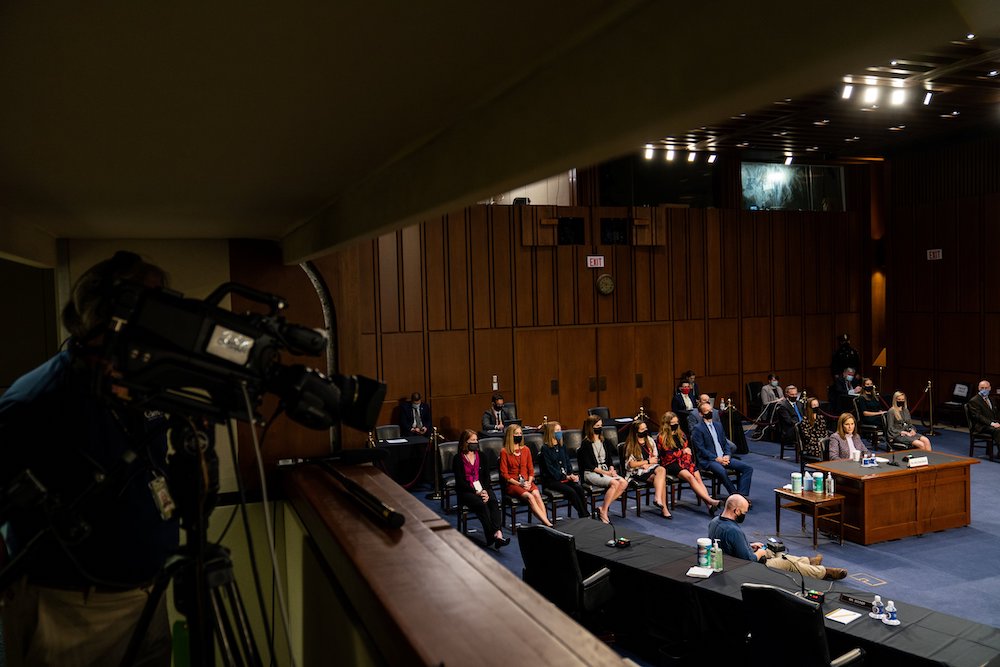 Judge Amy Coney Barrett of the U.S. Court of Appeals for the 7th Circuit, President Donald Trump's nominee for the U.S. Supreme Court, attends the third day of her Senate confirmation hearing to the Supreme Court on Capitol Hill in Washington Oct. 14. (CNS/Reuters/Demetrius Freeman)

The United States Senate should reject the nomination of Judge Amy Coney Barrett to the Supreme Court.

We believed it was wrong for the Senate to consider this nomination in the first place given the precedent set four years ago when Justice Antonin Scalia died in February, nine months before the election. Senate Majority Leader Mitch McConnell refused to even hold hearings on the nomination of Judge Merrick Garland, saying repeatedly that the American people should have a say in the matter. This year, when the death of Justice Ruth Bader Ginsburg created a vacancy less than nine weeks before Election Day, McConnell has seen fit to ram through the nomination.

The hypocrisy is rank, and it is impossible to see how rushing this nomination will be good for our democracy. The enmity caused by the Republicans' shameful double standard will not soon dissipate, not when lifetime appointments are at stake.

Barrett is not responsible for McConnell's behavior, but she has allowed herself to be a vehicle for his agenda and that of President Donald Trump. She could have phoned the White House and asked not to be considered for the nomination: Barrett is only 48 years old and there will be other vacancies.

"Many on the faculty are strongly opposed to the process by which Judge Barrett is being pushed through by the president and the GOP, especially on the eve of this presidential election," stated an open letter signed by over 100 faculty at the University of Notre Dame, where Barrett attended and taught at the law school.

Her willingness to become a collaborator, complete with the required adoring look at the president at the super-spreader event at which she was nominated, is not enough to justify a negative vote, but it set the table.

What disqualifies Barrett is the extreme moral relativism she displayed in her confirmation hearing. Not so long ago, moral relativism was the war cry of cultural conservatives, at least since then-Cardinal Joseph Ratzinger enounced the "dictatorship of relativism" at the last Mass before the cardinals entered the conclave of 2005 from which Ratzinger emerged as Pope Benedict XVI.

For example, after acknowledging that COVID-19 is contagious and that smoking causes cancer, she declined to affirm that climate change is happening, Barrett called the issue of climate change "a very contentious matter of public debate." Is that true? It is certainly the case that Trump is not sure what, if anything, he makes of climate change.

But let's be clear: Denying climate change is not that far from QAnon conspiracy theories. If Barrett really has doubts on the subject, she is not intellectually qualified to serve on the bench, and we suspect she knows that. She was simply willing to embrace moral relativism rather than risk a nasty tweet from the man who nominated her.

When Sen. Kamala Harris asked her a direct question — "Prior to your nomination, were you aware of President Trump's statement committing to nominate judges who will strike down the Affordable Care Act? And I'd appreciate a yes or no answer" — Barrett said she could not recall.

Really? You would think that in the days leading up to her nomination, Barrett would have followed closely, or been briefed upon, what the president did and did not say about his criteria in selecting a judge.

Sen. Amy Klobuchar asked Barrett if she thought it was against the law to intimidate voters at the polls and, even more strangely, Barrett refused to affirm that it was. Originalists like to claim that their method of interpreting the Constitution is the only method that genuinely honors democracy, but how is that possible if intimidation of voters is permitted?

This leads to the most repugnant realization about Barrett's relativism: In her commitment to originalism and textualism, she claims not to be interpreting the law or the Constitution at all. In her worldview, the Constitution is virtually a self-interpreting text. If that were so, why would we need judges?

In fact, in claiming that the meaning of the Constitution is fixed, and she can discern it, Barrett is actually doing exactly what she said she would never do. "As I said before, it is not the law of Amy, it is the law of the American people," she said.

But, unlike the brilliant scholar Barrett will replace when confirmed, who accepted other ways of interpreting the Constitution, the logic of Barrett's originalism is that Ginsburg's legal theories were not just different but were illegitimate. Barrett's relativism, like the man who nominated her, is on steroids.

We are glad that most commentators and virtually every question in the formal hearing avoided discussing Barrett's religion, even if her membership in a patriarchal covenanted community raises some legitimate concerns.

We at NCR do not like the prospect of five of the six conservative justices being Catholic and worry what that says about our church. In America, however, there are no religious tests for office and no senator should oppose Barrett on account of her religion.

It is her bad faith in discussing the law that warrants disqualifying her. About the evils of climate change, access to health care and voter intimidation, Americans deserve better than a relativist dressed in originalist drag. The Senate should vote no on the nomination of Amy Coney Barrett.

A version of this story appeared in the Oct 30-Nov 12, 2020 print issue under the headline: Barrett's nomination should be rejected.