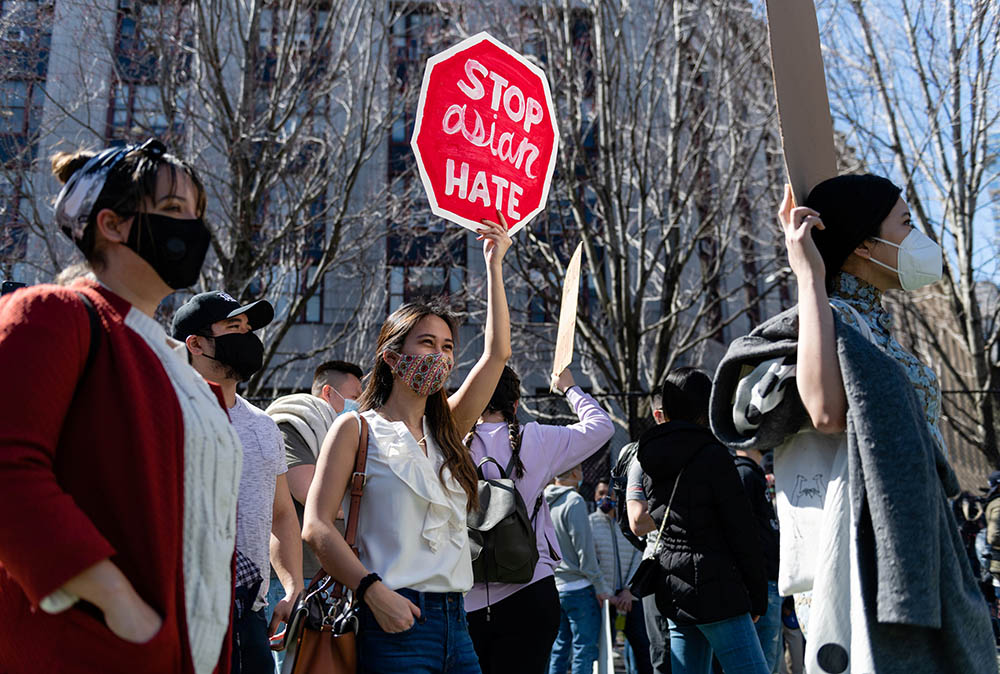 People in New York City are seen during a Rally Against Hate March 21 to protest discrimination and violence against Asian Americans and Pacific Islanders. (CNS/Reuters/Eric Lee)

In 2018, the U.S. Conference of Catholic Bishops published "Open Wide Our Hearts: An Enduring Call to Love." The pastoral letter was the first collective bishops' statement on racism in almost 40 years and describes the discrimination against Latinos, African Americans and Native Americans. It makes no mention of Asian Americans and Pacific Islanders.

Since Asian immigration to the United States began in the 19th century, Asians have been targets of white supremacist violence. Yet this history is, at best, ignored or revised, at worst, altogether erased.

In 1871, a mob killed 19 Chinese residents during a racial massacre in Los Angeles. Four years later, the United States passed the Page Act of 1875 that prohibited Chinese women from entering the country. It was the country's first restrictive immigration policy. During World War II, the U.S. government incarcerated more than 100,000 Japanese Americans in U.S. internment camps.

Despite this violence, the Asian community has continued to thrive in our nation and church.

In 2001, the bishops' Committee on Migration published "Asian and Pacific Presence: Harmony in Faith." The pastoral statement acknowledged how the lived experiences and contributions of Asian Americans and Pacific Islanders have "remained, until very recently, nearly invisible in the Church in the United States."

Hate crimes against the Asian American and Pacific Islander community increased by 150% from 2019 to 2020.

Asian women are 2.3 times more likely to get harassed or assaulted than Asian men. In January, a man kicked a woman on public transit in Oregon. In February, a man fractured a high school teacher's nose in Washington. In New York City, there were 12 hate crimes last month alone, including the assault of a 65-year-old woman on her way to church. On March 16, eight women were shot and killed in Atlanta. Six of the victims were women of Asian descent.

The new actions are an extension of "Memorandum Condemning and Combating Racism, Xenophobia, and Intolerance Against Asian Americans and Pacific Islanders in the United States," which the administration released in January.

The latest directives include $49.5 million in funding for sexual assault and domestic violence survivors who are Asian Americans and Pacific Islanders; a task force to study xenophobia and racial inequities in health care; a virtual library on Asian American history; and re-establishing the White House Initiative on Asian Americans and Pacific Islanders "to coordinate across federal agencies to combat anti-Asian bias and violence, especially anti-Asian violence at the intersection of gender-based violence."

These actions are welcome and critical to keep our Asian sisters and brothers safe following a year that saw several media and political figures deploying racist rhetoric against Asian Americans. Shortly after President Donald Trump described the pandemic as a "Chinese virus" for the first time on Twitter, the number of anti-Asian tweets grew.

Trump encouraged a language and sentiment many of his supporters quickly adopted, including many in our church.

We must no longer ignore the long and often forgotten racialized trauma experienced by citizens of Asian descent throughout American history. We must learn to center and uplift the Asian experience, from our Catholic schools to our parishes to our media.

The U.S. bishops can use the Ad Hoc Committee Against Racism to develop a pastoral letter on how racism affects the Asian American and Pacific Islander community amid a global pandemic.

Those of us in Catholic media can better report on how sex, gender, class and race all play a role in the violence we are seeing. We can take actions such as centering Asian writers and covering the dangers of the "model minority" stereotype.

It is time we become a church and nation that rejects the rage and violence that have harmed Asian Americans and Pacific Islanders for generations.

A version of this story appeared in the April 16-29, 2021 print issue under the headline: We must reject anti-Asian discrimination, violence.