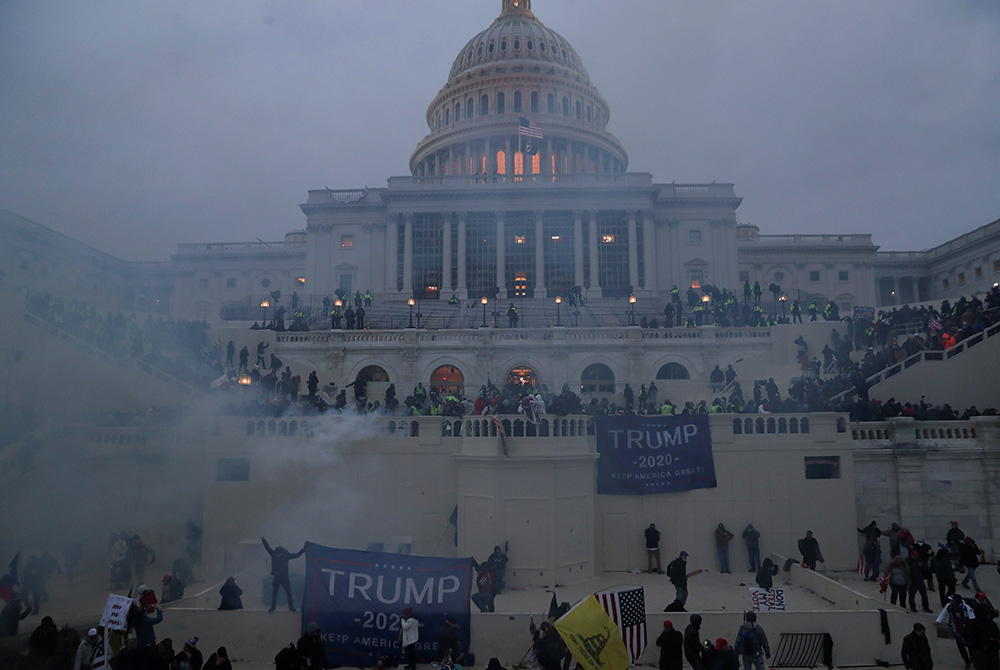 There is plenty of blame to go around after yesterday's shameful storming of the U.S. Capitol by a right-wing mob trying to stop the formal counting of the Electoral College vote for the legally elected next president of the United States.

Clearly, the current resident of the White House who for months has repeatedly and deliberately lied about nonexistent election fraud, and who, even as Confederate-flag wielding thugs strolled throughout the Capitol, is guilty of inciting violence in his morning speech on the Ellipse. Later in the day, he would express "love" for what can only be described as domestic terrorists.

And of course the more than 100 House Republicans and more than a dozen GOP senators who had planned to object to the Electoral College results yesterday — including those who later changed their minds, and, let's be honest, pretty much every Republican except Sen. Mitt Romney — will be remembered for laying the fire that eventually burst in flames.

Even Vice President Mike Pence and almost-ex-Senate Majority Leader Mitch McConnell, who tried to do the right thing by giving reasonable speeches in the morning, cannot erase the past four years of propping up Trump and contributing to the climate that fanned the frenzy.

But also among those with some culpability for yesterday's failed insurrection are more than a few leaders in our church. Catholic apologists for Trump have blood on their hands.

Many Americans expressed shock as they watched the violent mob smash glass and scale the walls while members of Congress cowered under desks or rushed to secure bunkers.

We were not surprised.

This is the culmination of what this presidency has been about from the beginning — and some Catholics have remained silent, or worse, cheered it along, including some bishops, priests, a few sisters, right-wing Catholic media and too many people in the pro-life movement.

And what about the everyday Catholics — some 50% of them — who voted for Trump this year, after four years of incompetence, racist dog whistles and assaults on democratic norms? Not all were at the "protest" in Washington, but many have supported organizations that fanned the flames. Too many Catholic voters were content to cozy up to Trump in exchange for tax breaks, or Supreme Court judges, or subsidies for Catholic schools.

Many of these folks have been shaped by right-wing Catholic media, whether rogue priests on Twitter, websites such as Church Militant or LifeSiteNews, or the Catholic media conglomerate the Eternal Word Television Network (EWTN). The latter, with its veneer of respectability, has misinformed millions of Catholics worldwide with its biased news and opinion shows. EWTN anchor Raymond Arroyo, who moonlights on Laura Ingraham's show "The Ingraham Angle" on Fox News, where he is freed from the EWTN's alleged respectability, deserves singling out.

It must stop. If the church is to live up to the teachings of its founder, and if it is ever to be a witness to the culture, it cannot, must not, be a part of what happened at our nation's Capitol. There must be no white Catholic nationalism. And a pro-life movement that embraces white nationalism is not a true pro-life movement. Period.

While some prelates have spoken out all along, the bishops' conference, as a body, must publicly confess and atone for its complicity in empowering the president and the Republican Party in this violence and in denigrating the Democratic Party. The U.S. bishops could start by disbanding that ad hoc, adversarial committee on President-elect Joe Biden, and use its various resources to re-shift how we discuss what it means to be pro-life Catholics. A pro-life movement unwilling to exclaim “Black lives matter” is not a pro-life movement.

Sackcloth and ashes should not be out of the question, but it will take more than a confession.

Our religious leaders, many of whom perpetuate the very white supremacy that led to yesterday’s coup, must begin the long, hard work of trying to rebuild a political culture of trust and unity. That cannot be done with hyper-partisanship and an intense focus on only one issue.

The temptation to cozy up to power is real, and some still refuse to let go. Some are trying to put a false antifa spin on yesterday's coup; others are moving too quickly to "put this behind us."

But the insurrectionists and the right-wingers, including Catholics, who have encouraged them are not all we are.

In less than two weeks, our nation's second Catholic president — a decent man — will take over and begin the long, arduous task of rebuilding our democracy. Catholics need to get on board to help, not hinder, that process.

A version of this story appeared in the Jan 22-Feb 4, 2021 print issue under the headline: The Catholic complicity in the failed coup.