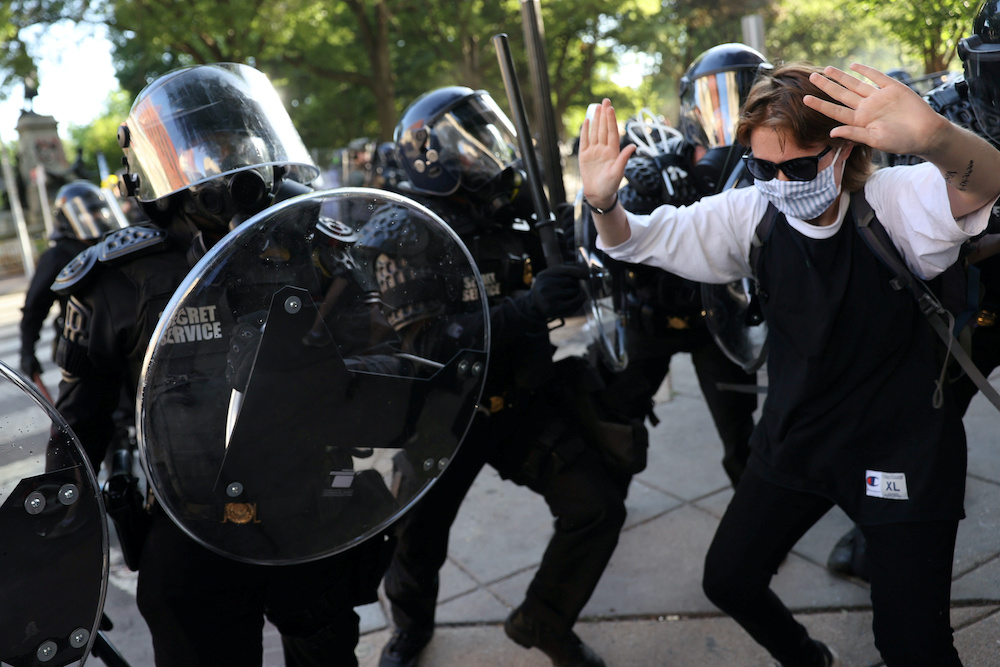 Seventy-five-year-old Catholic peace activist Martin Gugino remains hospitalized in serious, but stable, condition after two Buffalo police officers shoved him to the ground last week during a Black Lives Matter protest. A crowd of other officers walked by, leaving Gugino bleeding from the head.

Two officers have been charged with felony assault (a felony, because of the age of the victim), but 57 other officers resigned from the department's emergency response team in a show of support for their colleagues, whom they say were "simply executing orders."

Gugino is a longtime peace activist and friends with members of the local Catholic Worker, according to Religion News Service. Although President Donald Trump later tweeted — without evidence — that Gugino "could be an ANTIFA provocateur," video of the incident does not show any provocation on his part.

Sadly, this is just one of a number of disturbing depictions of police violence during the protests that have exploded across America — protests that were, in fact, a response to police violence to begin with, most recently the chilling murder of George Floyd. His death by asphyxiation after a police officer knelt on his neck for almost nine minutes, while Floyd begged for his life, was captured on video and justifiably inflamed a nation.

During the resulting protests, children, the media and senior citizens like Gugino have been on the receiving end of batons, tear gas, pepper spray and rubber bullets from those who are paid to serve and protect. Officers have been suspended or charged for excessive force against protesters in New York and Atlanta, while numerous other cases are being investigated.

Clearly, it's time to retire the "few bad apples" argument when it comes to police violence.

That is why some are issuing a call to "defund the police." The idea deserves serious consideration, even if the slogan borders on inaccurate — since it doesn't really call for the complete abolishment of all law enforcement. What it does propose, however, is a radically different way of thinking about public safety.

The gist of the "defund" movement is to argue for spending less on expensive police departments and instead use that money for housing, education and social service resources that would better serve the community — and decrease crime, advocates say.

A few extremists — and opponents of reform — will try to paint this as silly: Who wants to call a social worker when your house is broken into? Even Democratic presidential nominee Joe Biden said he opposes cutting police funding, though he supports some meaningful reforms. Yet the critique by those calling for a more radical reform of policing in America is a fair one. Laws and their enforcement are necessary, but a society that over-relies on violence to keep order has already failed.

Some reforms seem obvious and easy: ending the use of chokeholds, no-knock warrants and military-style raids. A bipartisan push in Congress is seeking to end a program that transfers military weaponry from the Pentagon to local law enforcement departments. Some lawmakers propose eliminating "qualified immunity," which shields public officials, including police officers, from civil lawsuits over constitutional violations — such as the right to be free from excessive police force — as long as they did not violate "clearly established" law.

Camden, New Jersey, routinely described as one of the most violent cities in the country, saw its crime drop by close to half after it radically reformed its police department in 2012, primarily to address police corruption. Camden adopted "community-oriented policing," which focuses on working with residents to solve problems, rather than on violence and punishment. Officers are trained to de-escalate; deadly force is the last option. 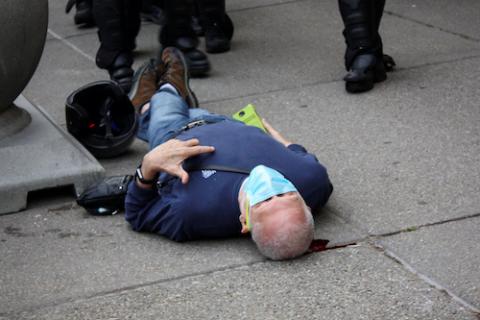 Martin Gugino, 75, of Amherst, New York, lies on the ground after he was shoved by two Buffalo police officers June 4 during a protest against police violence. (CNS/Jamie Quinn/handout via Reuters)

Now Minneapolis, the site of Floyd's killing, is planning a similar move, with a majority of the City Council pledging to dismantle a police department they say is unable to be reformed. Plans for the new system of public safety are not yet solidified, but advocate say it will address the systemic racism in the current system.

The United States spends $100 billion (that's billion with a "B") on policing each year — and that doesn't include the cost of prisons, or of settlements for police misconduct cases. Large cities routinely spend 25% to 40% of their budgets on policing; New York's annual police budget is $6 billion.

And while education, housing and other budgets are routinely cut, police budgets continue to rise. Like runaway military spending, police spending seems untouchable.

"Daddy changed the world," George Floyd's 6-year-old daughter Gianna told a family friend. Let one of those changes be, at long last, a reconsideration of a militarized police force. A hammer, if you will, that sees everything as a nail.

Twenty-five years ago, the U.S. bishops wrote a pastoral letter on violence — perhaps one of teachings that inspired Gugino's activism.

"Let 1995 and the years which follow be a time when the Catholic community brings new energy and creativity to the vocation of peacemaking — within our families, within our neighborhoods, within our country and within the world community," they wrote.

Perhaps this is the year, finally, that all Catholics — including Catholic police officers — will heed the Gospel call to be true peacemakers.

A version of this story appeared in the June 26-July 9, 2020 print issue under the headline: Defund police, or de-escalate their force.

Biden's State of the Union speech was strongest on economic issues