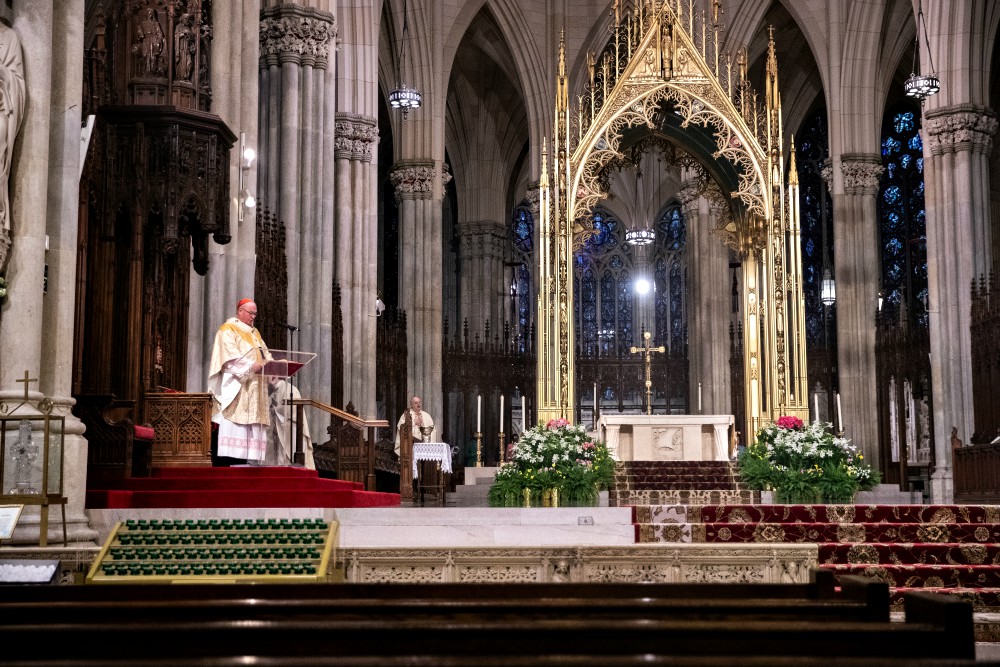 The capitulation is complete.

Without a whimper from any of his fellow bishops, the cardinal archbishop of New York has inextricably linked the Catholic Church in the United States to the Republican Party and, particularly, President Donald Trump.

It was bad enough that Cardinals Timothy Dolan of New York and Sean O'Malley of Boston, joined by Los Angeles Archbishop José Gomez, currently also president of the U.S. Conference of Catholic Bishops, participated in Trump's phone version of a campaign rally on April 25. With hundreds of others on the call, including Catholic educators, the bishops were once again masterfully manipulated. They previously gave Trump certain campaign footage when they delivered Catholics to his speech at the March for Life rally in Washington early in the year.

Now Trump will have Dolan's language from the call, telling everyone that he considers himself a "great friend" of Trump, for whom he expressed mutual admiration as "a great gentleman." The cardinal went on to say that he was "honored" to lead off the comments on the call.

The whole cringe-worthy exchange (yes, Trump did self-describe as "the best" president "in the history of the Catholic church") was made worse the next day when Dolan provided more campaign footage from inside St. Patrick's Cathedral in announcing that the president was "worshiping with us," purportedly livestreaming the Mass at the White House.

Friendships have existed in the past between U.S. presidents and princes of the church. How those affected the church's involvement in politics and policy, negatively or positively, differed from one circumstance to another. But it is rare, if not unprecedented, that the church's leadership apparatus would be co-opted to the degree seen in the case of Trump.

Certainly, it is without precedent that the leadership would cozy up so cravenly to a president whose most consistent attribute is an uncontrollable propensity for lying, continuously and about everything. He is dangerously disconnected from reality and is defined by characteristics that normally are condemned from pulpits.

In People of Hope, a book-length conversation Dolan conducted with journalist John L. Allen Jr. published in 2012, a chapter is devoted to politics in which the cardinal concedes that there is an understandable perception that the U.S. bishops are in a "de facto," in the questioner's words, alliance with the Republican Party.

The reality, Dolan contends, is more complex. "My experience is that we bishops are actually fairly scrupulous in wanting to avoid any partisan flavor."

One might reasonably conclude today that such scrupulosity has gone out the window. For Dolan and his fellow episcopal travelers, the all-consuming issue is abortion. That tops the agenda in any political consideration. Allen asked: "Are you saying that the perception of being in bed with the Republicans, or the political Right, is the PR price that has to be paid for taking a strong stance on abortion?"

Unfortunately, the bishops have paid a much higher price than poor public relations in their political strategy the past four decades. Abortion is a serious subject that they've turned into a political volleyball in a game with no winners except the groups on the extremes of the issue who cash in every four years, sustaining careers and an endless debate.

In one interesting concession to reality, Dolan notes during the conversation that no less a conservative hero than the late Jesuit theologian and cardinal, Avery Dulles, often asked whether a legal ban on abortion could be enforced, noting that Thomas Aquinas advised against pursuing unenforceable law.

That is a reasonable question, particularly in the current context. NCR has always held up the efficacy of church teaching on life issues, especially as embodied in Cardinal Joseph Bernardin's consistent ethic of life. At the same time, we have regularly and strongly objected to what the bishops were doing in the public square regarding the issue of abortion because the strategy has proven most effective in dividing the Catholic community and turning the institutional church into a partisan enterprise.

Whether a ban would be enforceable is a legitimate question. It speaks to political reality, something even the bishops address in their sadly dated voting guide, "Forming Consciences for Faithful Citizenship." In Paragraph 32 of the document the bishops acknowledge that flawed and unjust laws may exist and changing them may be a gradual process subject to "the art of the possible."

It is, finally, reasonable to note that at this moment, particularly, the bishops have little credibility for two reasons. The first is that survey after survey has shown over the years that they have been unable to persuade even Catholics to their point of view in any proportion different from the consensus that exists in the wider public.

The second reason they lack credibility has to do with their own behavior. This absolute rule for women comes from an all-male culture that showed itself quite adept at accommodating a level of violence against already-born children, covering it up and wishing to move beyond the facts and the wrecked lives of thousands of victims and their families.

It is quite a stretch to take the role of moral absolutist on the matter of abortion when you've demonstrated a capacity to engage in a degree of relativism that is truly breathtaking when dealing with horrible abuse of children. Their own behavior over decades of covering up abuse puts the lie to the sanctimonious posturing about the absolute dignity of every person.

This unholy alliance with Trump, coupled with the GOP stacking of the Supreme Court, may get the bishops the abortion ban they so covet, but it will not end the debate. They may even get the federal money they desperately need to extend the fading life of Catholic schools. But all of it will have been purchased at the expense of a whole range of other life and justice issues.

It will have been purchased in concert with a president whose primary modus operandi is that of a bully devoid of empathy or concern for the common good. If one actually believes Trump's current gushing about Catholic schools and the right to life, Dolan might also be offered a great deal on a bridge somewhere in the vicinity of the cathedral.

It need not be this way. The bishops themselves, in the conclusion to "Faithful Citizenship," describe a different approach. It is worth repeating the points here:

The Catholic bishops' uncritical alliance with Republicans and Trump obliterates those principles and allows Catholics to dismiss the document as lacking any serious intent.

The alliance also further distances the church from any leverage it might otherwise possess on a host of issues on the Catholic social justice agenda deeply affecting life of the vulnerable and marginalized, as well as from any hope of brokering modifications to abortion on demand with Democrats.

The Catholic voice, capable of a priceless contribution to the public conversation, has been sold for cheap to political hucksters.

A version of this story appeared in the May 15-28, 2020 print issue under the headline: Dolan delivers church to GOP.