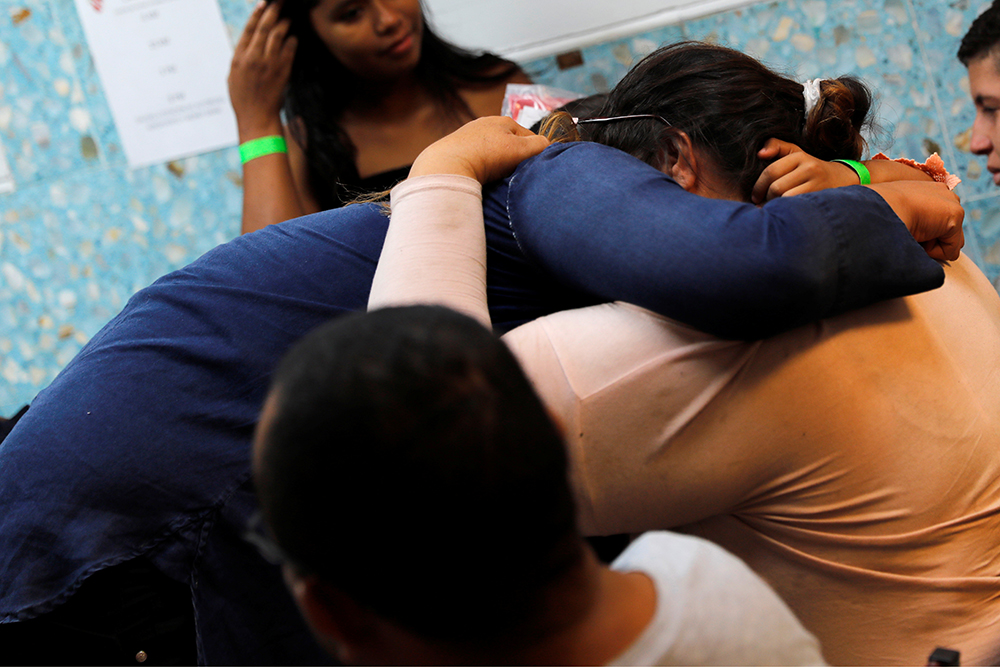 Members of a Central American family are reunited June 4 at a Catholic-run shelter in Laredo, Texas, for asylum-seekers released by U.S. Immigration and Customs Enforcement and U.S. Customs and Border Protection due to overcrowded facilities. (CNS/Carlos Jasso, Reuters)

If it weren't for the white boxes shielding the faces of dozens of men and women stuffed into the overcrowded cell, it would be difficult to count the people in the photograph, since their overlapping limbs make it impossible to see where one body ends and another begins.

During surprise inspections, officials found people standing on toilets just to find air to breathe and detainees crammed in standing-room only cells for weeks, with limited access to showers or clean clothes — risking not only the health and safety of the detainees, but of agents and officers as well, the report said.

The "dangerous overcrowding" required "immediate action," the report said, warning about the spread of illness and concerns that "rising tensions among detainees could turn violent."

Other reports in past weeks have revealed that mentally ill detainees are being held in solitary confinement, and that lack of medical care is responsible for suicides and other deaths of detainees.

Two days after the report's release, a 25-year-old asylum-seeker died in a Texas hospital after nearly six weeks in custody of U.S. Immigration and Customs Enforcement, or ICE, bringing the total to at least 24 deaths while in custody or shortly after release, plus at least five deaths of children in other detention facilities during the Trump administration.

While these numbers are actually lower than some previous years, they are expected to rise as detentions are mushrooming to a record high. As of early June, ICE was detaining more than 52,500 people a day in more than 200 detention centers, some 300,000 to 500,000 individuals per year, according to an ICE statement to NBC. Just this week, President Donald Trump and his new ICE acting director Mark Morgan have said they plan to increase large-scale raids and arrests.

The administration also announced this month that it will be eliminating education, recreation and legal services for unaccompanied migrant children in U.S. custody — those children separated from their families and held in cages that so horrified most Americans last year at this time.

Since then, many of us have gotten on with our busy lives, paying perhaps only limited attention to the regular reports about rising numbers and deteriorating conditions for fellow human beings being held by our government.

It's time to stop looking away and to start calling these "centers" or "facilities" what they really are: concentration camps.

A concentration camp involves "mass detention of civilians without trial," says the woman who literally wrote the book on the subject, Andrea Pitzer, author of One Long Night: A Global History of Concentration Camps.

Coincidentally — or not — the Trump administration recently announced that some of the nearly 41,000 immigrant children taken into custody this year will be moved to the Fort Sill Army Base in Oklahoma, which was once used as a Japanese internment camp in the 1940s. (The Obama administration also temporarily housed migrants at military bases, including Fort Sill, for four months in 2014.)

To those who balk that current U.S. immigrant detention centers are not like Auschwitz, genocide historians remind that not all concentration camps are extermination camps — and even the latter didn't start that way. Without diminishing the extreme horror of Nazi death camps, more and more commentators — not just Rep. Alexandria Ocasio-Cortez —are saying the "concentration camp" term fits in this contemporary case.

"Things can be concentration camps without being Dachau or Auschwitz," Waitman Wade Beorn, a Holocaust and genocide studies historian and a lecturer at the University of Virginia, explained to Esquire. "Concentration camps in general have always been designed — at the most basic level — to separate one group of people from another group. Usually, because the majority group, or the creators of the camp, deem the people they're putting in it to be dangerous or undesirable in some way."

It's important to remember that many of those detained at the U.S./Mexico border are not, in fact, doing anything illegal. They are refugees fleeing violence and persecution in their native countries, who are fully within international and U.S. law to present themselves at the border to seek asylum. That's not to mention that U.S. foreign policies bear significant responsibility for the crumbling conditions in their home countries.

Although mass detention of immigrants predates the Trump administration, the current president has made it a centerpiece of his agenda and perfected the use of extreme language to dehumanize families fleeing for their lives and safety.

Such dehumanization is always part of concentration camps, according to Jonathan Hyslop, a professor of sociology and anthropology at Colgate University in Hamilton, New York, who wrote an article on "The Invention of the Concentration Camp: Cuba, Southern Africa and the Philippines, 1896-1907."

"It's important here to look at the language that people are using," Hyslop said. "As soon as you get people comparing other groups to animals or insects, or using language about advancing hordes, and we're being overrun and flooded and this sort of thing, it's creating the sense of this enormous threat. And that makes it much easier to sell to people on the idea we've got to do something drastic to control this population which [is] going to destroy us."

At a rally in Florida last month, Trump was bemoaning migrants' legal protections when someone in the audience suggested they should be shot. The president laughed and made a joke.

Experts say concentration camps — through overcrowding and dehumanization — actually become self-fulfilling prophecies. The culture of abuse leads to frustration and violence, thus "justifying" their incarceration after the fact.

Other citizens — that's us — become increasingly desensitized to the dehumanization of a group of people and thus implicitly give approval for concentration camps by our lack of pushback.

But our faith — if not our humanity — calls us to see and protect the God-given dignity in all people. Catholic social teaching compels us not to look away, but rather to advocate for the oppressed.

Theologian Nichole Flores, speaking at a recent conference on the common good at St. Mary's College in Notre Dame, Indiana, reminded Catholics of their moral obligation of solidarity with migrants at the border because we are "connected to each other in Christ."

"Their struggle is our struggle. Their joy is our joy. Their babies are our babies. Their families are our families," said Flores, assistant professor of religious studies at the University of Virginia.

Flores didn't use the term "concentration camp," but she clearly called U.S. treatment of migrants, refugees and asylum-seekers — including the separation of children from their parents — "an anti-life policy."

Opposing concentration camps should be a pro-life priority. We cannot look away.

A version of this story appeared in the June 28-July 11, 2019 print issue under the headline: Don't look away from concentration camps.