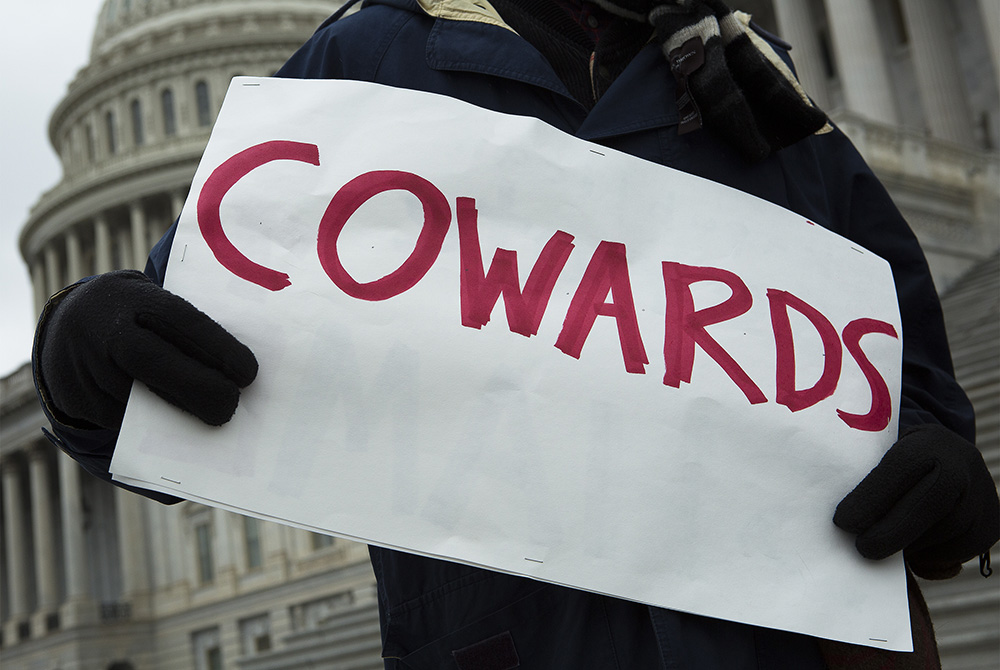 A political protester is seen Feb. 5 on Capitol Hill in Washington. President Donald Trump was later acquitted by the U.S. Senate on two articles of impeachment that same day. (CNS/Tyler Orsburn)

It's reasonable to feel that the U.S. Senate's failure to convict President Donald Trump, or even hear needed testimony, is cause for despair about the future of the country.

Yet there were bright spots in the process, heroes who stepped up and recognized truth at a time when falsehood is the coin of the political realm.

The highest profile among them belongs to Sen. Mitt Romney of Utah, the only Republican to vote to convict Trump. He spoke in the Senate chamber and righteously declared he was inspired by religious faith to take seriously his oath to God. Romney, of course, is the nation's most famous Mormon. His brief but powerful explanation of his vote on the Senate floor was a lesson for all in engaging principle and conscience. His speech only made more apparent the absence of an appeal to conscience among other Republican politicians, Catholics and others, or discussion of moral obligations. We heard lots about what a political mistake impeachment was.

Less recognized were the Democrats holding tenuous seats, who were willing to do the right thing and vote to convict this president. They include senators from slightly red leaning states such as Kyrsten Sinema of Arizona, and those representing bold red states, such as Doug Jones of Alabama and Joe Manchin of West Virginia — two places where Trump garnered more than 62 and 68% of the vote, respectively, in 2016. It is hard to see anything but an exercise of conscience in service of principle, especially for Jones and Manchin, given the fact that they knew ahead of time that their votes would have no effect at all on the outcome, and could only present them with political jeopardy.

Others, on the periphery of the process, stepped forward. Among them was Supreme Court Chief Justice John Roberts, who, after Sen. Rand Paul of Kentucky sneakily slipped him a question intended to divulge the name of the civil servant who blew the whistle on the Ukraine escapade, declined to play along.

George Conway, a Federalist Society conservative lawyer, has been zealous in calling out the crimes of the Trump Administration, clearly risking his Republican bonafides in the process, and, perhaps, disturbing the domestic tranquility of family life with wife Kellyanne Conway, counselor to President Trump.

Special attention belongs to those of lower rank, laborers in the vast federal bureaucracy, who when called upon, simply told the truth of what they saw and heard. These heroes included Marie Yovanovitch, the former ambassador to Ukraine, who compellingly testified to the harassment she experienced from the Trump outlaws while doing her job in a sensitive and unglamorous diplomatic outpost.

Fiona Hill, the former White House Russia expert and aide to John Bolton, said what her boss didn't. She has a lot to lose as part of the Republican apparatus and will be left adrift, still representing a bygone era when Republicans could be counted upon to warn about Russia.

William Taylor Jr., career diplomat, came out of retirement to serve as ambassador to Ukraine, and questioned the quid pro quo the Trump team was promoting.

Lt. Col. Alexander Vindman, a decorated war veteran, now attacked by the acolytes of the draft dodger president who, as a young man confronted with the Vietnam-era draft, conveniently suffered from mysterious bone spurs. Vidman questioned the notorious call to Ukraine early on, and was transferred out of the White House as a result.

Unsung hero Jennifer Williams, aide to Vice President Mike Pence, apparently told the truth about Pence's communications with Rudolph Giuliani, and the discussions about the machinations around her boss avoiding the Ukraine presidential inauguration. Her career is still young, and she is likely not feeling welcome around the White House these days.

It took Gordon Sondland a while, and he is not all that sympathetic as a million dollar fat cat donor to Trump, but he did testify truthfully, in his role as ambassador to the European Union, that Trump's expectation of a quid pro quo was beyond doubt.

So, take heart, not everyone failed. Many provided inspiration in this imbroglio, heroes who stepped up and did the right thing. But there were enough goats as well, those who failed miserably, making it easy to question the state of the nation in this Age of Trump. There remains reason to fear that more heroes may be required before this national nightmare is over.

A version of this story appeared in the Feb 21-March 5, 2020 print issue under the headline: Heroes of the impeachment imbroglio.