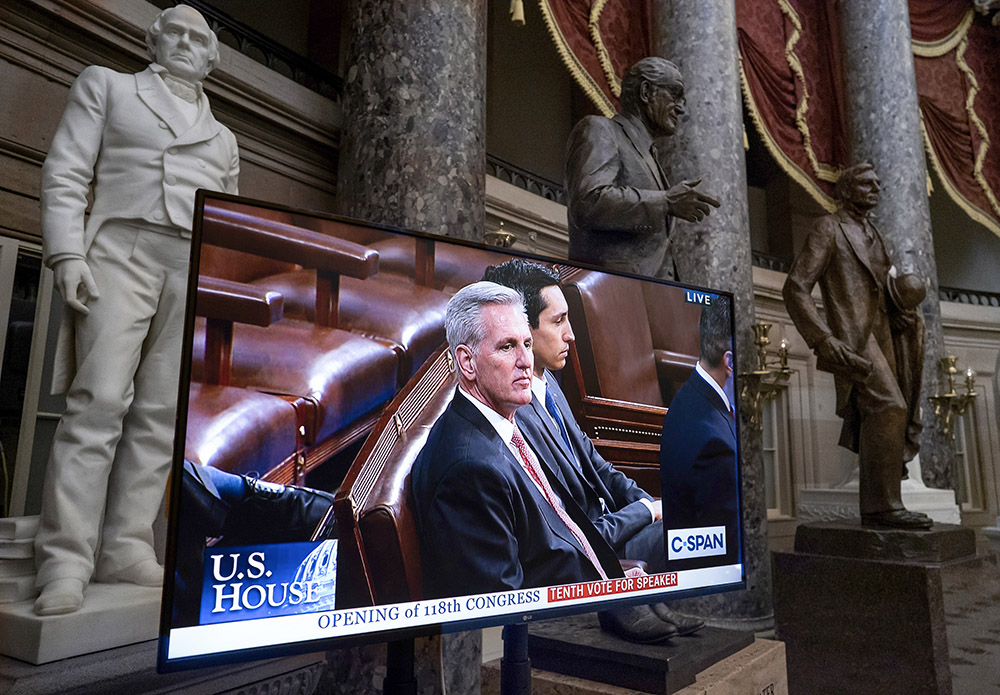 A monitor in Statuary Hall displays Rep. Kevin McCarthy, R-California, as he sits in the House chamber at the start of a 10th ballot to elect a speaker at the Capitol in Washington Jan. 5. (AP/J. Scott Applewhite)

If Americans wanted a preview of what the next two years of governing would look like with the new Republican-controlled House of Representatives, they got it in the embarrassing debacle over the election of the speaker. What should have been a slam-dunk dragged on for a chaotic five days and 15 rounds of voting — the longest contest in 164 years. Meanwhile, Congress was stalled, members could not even be sworn in and our country's reputation around the world was once again diminished.

When Rep. Kevin McCarthy of California was finally elected speaker in the early morning hours of Jan. 7, it was only after the conservative wing of his party forced a series of concessions that will actually make it harder for the new GOP majority to govern.

Buckle your seatbelts. It's going to be a wild ride. And any hints we have of some kind of actual Republican agenda indicate that important tenets of Catholic social teaching will be missing from the chaotic mix.

Up next: the debate over the debt ceiling and GOP threats to refuse to raise it — which would have "catastrophic economic consequences," according to the U.S. Department of the Treasury.

The federal government technically ran out of money to meet its many obligations on Jan. 19 and has been using "extraordinary measures" since then to keep the government running. But by summer, there will not be enough cash to pay federal employees and pensioners, the military, and beneficiaries of Social Security, Medicaid and other programs.

The government has shut down before, but defaulting on our creditors would be something altogether different — and much worse. Economists predict that if that happens, it could set off a global economic collapse that could plunge the U.S. into a disastrous depression equal or worse to 2008. In addition, the effects of default — or even threats of one — can last for months or even years.

That is why Congress has always acted to raise the debt limit — 78 times since 1960. Even the mere prospect of a default can injure an economy finally recovering from inflation.

But the fractured Republican Party has jumped on the opportunity to use the debt ceiling debate as a way to appear unified around the issue of cutting government spending. So despite the fact that raising the debt ceiling only applies to existing commitments, not new spending, the GOP is demanding spending cuts in exchange for raising the debt limit. So far, President Joe Biden has refused to negotiate.

In recent days, some politicians from both parties have expressed confidence that a deal will be made, but the House speaker debacle does not inspire confidence in Republicans' ability to compromise.

Given the severe financial implications of even getting close to defaulting, now is not the time to argue over already agreed-upon spending. But when it's time to talk about appropriations, sadly the GOP always wants to balance the budget on the backs of those already heavily burdened.

In the debt ceiling debate, cuts to Social Security and Medicare have already been floated by some Republicans — prompting even former President Donald Trump to release a video saying he opposes such a proposal.

Instead, Trump suggested cuts to the proverbial "waste, fraud and abuse" conservatives love to talk about, causing us to wonder why he didn't tackle that under his term. Instead, Trump so massively increased borrowing that nearly a quarter of all federal debt incurred in the country's history happened under his watch. While the coronavirus pandemic was a contributing factor, it was Trump's tax cuts for the rich that were the true culprit.

Many Republican lawmakers, celebrating the overturning of Roe v. Wade in the summer and working to limit access to abortion in their states, pledged to finally turn their attention to the kind of supports necessary for women to continue their pregnancies. Affordable health care, paid parenting leave, subsidized day care, a living wage, food, housing and other assistance — these are truly pro-life policies that could help address the demand for abortion, not just its supply. They are also the right thing to do for any person in need.

In addition, our country needs real immigration reform, with a pathway to citizenship for those who were brought to the U.S. illegally as children and for others.

And we need to expand access to health care and enact stricter regulations that protect the environment and those who suffer from environmental injustices like pollution and the toxic effects of chemical plants and fracking — which affect the health of already disadvantaged people and vulnerable communities. This, too, is supported by Catholic social teaching, Pope Francis and many church leaders.

Will Republicans fund such programs? Or will Republicans prioritize fights against critical race theory, gender pronouns and Hunter Biden? Is the GOP rebranding as the party of the working class only a marketing ploy, and concern about fiscal responsibility a political payback to a Democratic president? We will find out over the next months.

A version of this story appeared in the Feb 3-16, 2023 print issue under the headline: GOP agenda hardly reflective of Catholic values.