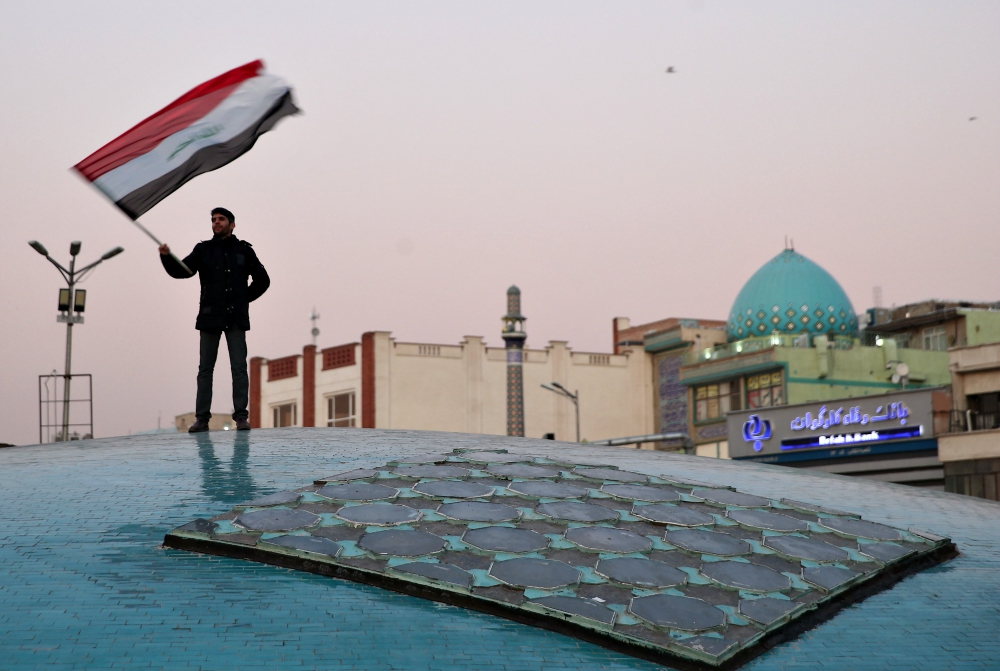 A man celebrates in Tehran, Iran, Jan. 8 after the country launched missiles at U.S.-led forces in Iraq. Iran attacked two bases in Iraq that house American troops with a barrage of missiles early Jan. 8 in retaliation for the U.S. killing an Iranian general Jan. 3. (CNS/West Asia News Agency via Reuters/Nazanin Tabatabaee)

In August 1999, the United Nations Children's Fund released a report concluding that the deaths of 500,000 Iraqi children under the age of 5 were directly related to a decade of U.S.-backed economic sanctions. The information was based on a survey of women and children in Iraq, the first since 1991 when the first Gulf War ended.

The "ongoing humanitarian emergency," in the words of UNICEF officials at the time, was, we now know, nowhere near ending. Nor was the war. Nor was the growing conviction in-country that the United States was less conducive of the values it liked to apply to itself than it was of chaos and cultural disintegration.

The same year the U.N. released the report on Iraq, another report by the independent organization Historical Clarification Commission — created during a U.N.-overseen peace process among warring factions in Guatemala — concluded that Guatemalan forces, aided by the U.S. Central Intelligence Agency, had committed acts of genocide, primarily among the indigenous Mayan community.

"The commission listed the American training of the officer corps in counterinsurgency techniques as a key factor that ''had a significant bearing on human rights violations during the armed confrontation,'' according to a report in The New York Times. More than 200,000 people were killed and many more were tortured during the country's 36-year civil war. The most violent period occurred during the early 1980s.

The history is significant, if sparingly acknowledged, given the current situation in the Middle East, where the U.S. assassination of Iranian Gen. Qassem Soleimani has occasioned a new round of all-too-familiar rhetoric about enemies deserving of death, even if questions are being raised about the strategy and its subsequent fallout.

The commentary and analysis in the United States always seems to stop at the water's edge of a vast and growing sea of history that might prove treacherous to baked-in presumptions of the superiority of our intentions and of how noble they always are when compared to those of other countries. It is a presumption that Stephen Kinzer in his book Overthrow: America's Century of Regime Change from Hawaii to Iraq describes as a "persistent strain in the American character … the belief that the United States is a nation uniquely endowed with virtue."

There are yet unique virtues in place in this noble experiment in self-governance, but their relevance is diminished if we refuse to take an unvarnished look at our activity beyond our borders and how others perceive us.

The lofty and image-laden language of a Ronald Reagan shining-city-upon-a-hill farewell speech or a morality-laden George W. Bush justification for invading Iraq sought to make virtuous what was otherwise quite clear: The cost of war was justified in order to gain access to or protection of resources — Iraq's and Kuwait's oil, or Guatemala's abundance of mineral and other assets. The harsh reality is that in the mid-1950s, the United States overthrew duly elected democratic governments to procure our interests.

Each of those acts, and more, had lasting consequences still reverberating today. The cycle of violence between Iraq and Iran, and the tangle of U.S. involvement, first one side and then the other, during the past 40 years muddle the claims of noble intent. Such incidents may recede quickly into our rearview mirror, but the cultures affected don't quickly forget.

A persistent reality abides: What America has done in so many instances is the timeless business of nation-states able to take what they want by force. "What distinguishes Americans from citizens of past empires," wrote Kinzer, "is their eagerness to persuade themselves that they are acting out of humanitarian motives."

With President Donald Trump, the pretense is not even worth the effort. The language of noble motives and moral purpose just doesn't fit. Instead, we live with the results of impulse unrestrained by anyone with diplomatic or military experience who might, if for no other reason than self-preservation, point out the possible ugly implications of assassinating another country's general.

All the "adults" have left the room and the prospects become terrifying, given the fact that from at least Bill Clinton forward, the Oval office, thanks to technological advances, has increasingly become the spot from which an individual can make decisions about the use of force previously unimagined.

"The use of lethal drones has inaugurated a new and dangerous phase in modern warfare that raises very serious moral and legal questions," said Marie Dennis, former co-president of Pax Christi International. She was one of several Catholic ethicists and peace experts who raised serious questions about the killing of Soleimani.

Even if Soleimani was viewed as a legitimate target under just war theory because he had killed Americans, said theologian Lisa Sowle Cahill, "There is not firm evidence that Soleimani posed an imminent threat."

And one might reasonably ask what that makes of those who ordered sanctions that killed half a million little kids?

Gerard Powers of the Kroc Institute at the University of Notre Dame, noted some positive points that evolve from the questioning of the Soleimani assassination, one of which is that "the public debate suggests that we might be beginning to learn some of the right lessons about the country's two longest wars" in Afghanistan and Iraq.

One of those lessons, the results of the recently released "Afghanistan Papers," is that another consistent element of recent U.S. war-making is the layer of official deception that accompanies our seemingly endless involvement in a perpetual use of force.

It is time to stop trying to embellish endless conflict and destruction of cultures with a veneer of noble purpose. Experience has demonstrated that contemporary wars are often futile and failed attempts to get what we want. They don't defend anyone, they don't guarantee safety at home and, in the modern era, they seem never to end.

A version of this story appeared in the Jan 24-Feb 6, 2020 print issue under the headline: US foreign policy belies its noble veneer.