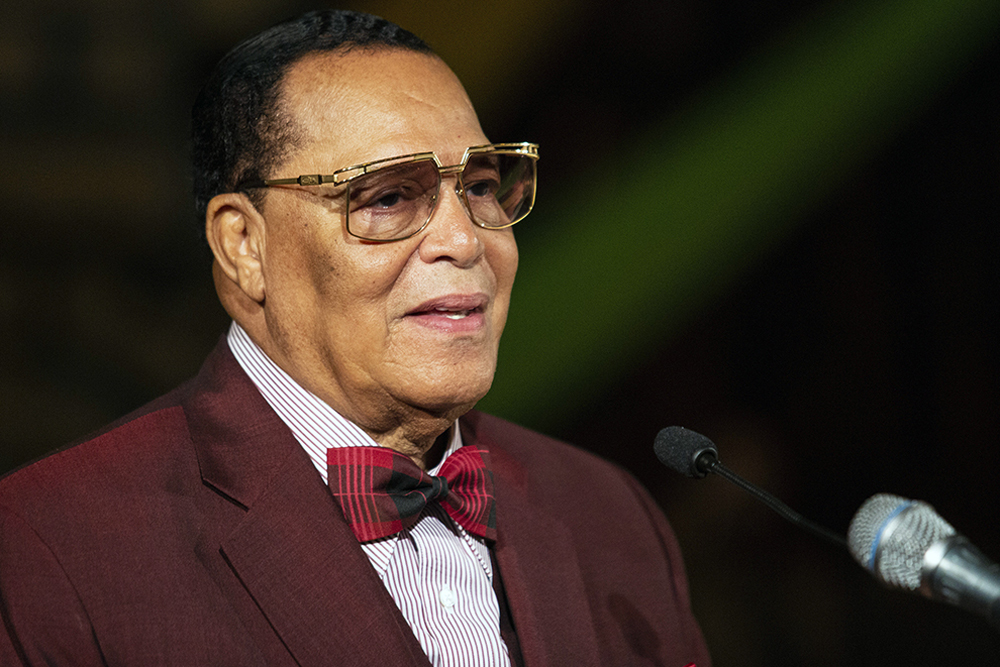 Minister Louis Farrakhan, of the Nation of Islam, speaks at St. Sabina Church on May 9 in Chicago. (Ashlee Rezin/Chicago Sun-Times via AP)

Fr. Michael Pfleger, the Chicago priest who has made a name for himself and his parish as a bold crusader against unjust systems and social inequity, has always taken a certain glee in poking authority, civil and ecclesial, in the eye.

He has also displayed a fondness for skating close to the edge of convention and propriety. But on the evening of May 9, he went way over the edge into dangerous and ugly territory when he handed over St. Sabina's sanctuary in South Chicago to his longtime friend, Minister Louis Farrakhan, who went on to unleash — unchallenged — a hateful invective against Jews.

Farrakhan, another flamboyant Chicago figure and leader of the Nation of Islam, was invited to the church to respond to Facebook, which has recently banned him from its platforms. He could have responded in countless ways, but he chose the one way that handed the world overwhelming evidence for why he's been banished.

The saving grace in all of this was Cardinal Blase Cupich's swift condemnation of the talk in a statement that eloquently and unequivocally rejected Farrakhan's language and issued a heartfelt apology to our Jewish brothers and sisters.

There may be persuasive reasons to have a robust debate about whether Farrakhan's ban raises important constitutional free-speech issues. After all, the First Amendment protects everything from pornography to white supremacists as the cost of free speech. But there's no rationale at all for inviting hate speech into our sanctuaries.

For more than an hour, Farrakhan's rambling and disjointed oration was little more than bad performance art. But in the final segment, when he, as the archdiocesan statement put it, "repeatedly smeared the Jewish people, using a combination of thinly veiled discriminatory rhetoric and outright slander," the only proper response from Pfleger would have been to pull the plug on the microphone and tell his friend that the show was over. He should have apologized himself to the congregation for Farrakhan's anti-Semitic rant.

The visiting speaker spoke of "Satanic Jews," and in a torrent of exegetical gibberish, went on about the Talmud and how it sanctions pedophilia and misogyny. He told the assembly that he was somehow divinely anointed to separate "good Jews" from "Satanic Jews."

"Such statements shock the conscience," said Cupich in a release posted on the archdiocesan website. Religious leaders, he said, "have a sacred duty never to leverage the legitimacy of their ministry to heap blame upon a group of persons, and never to deploy inflammatory rhetoric, long proven to incite violence."

Anti-Semitic rhetoric, he said, "has no place in American public life, let alone in a Catholic church. I apologize to my Jewish brothers and sisters, whose friendship I treasure, from whom I learn so much, and whose covenant with God remains eternal."

Not only did Pfleger fail to pull the plug, he giggled along with Farrakhan's entourage, gave the visitor a huge hug at the end of his speech and took the microphone himself to encourage anyone listening to flood Facebook with Farrakhan's teachings.

The Catholic pastor wore a shirt bearing the legend, in large letters, "Demand Justice." Indeed. We will be waiting and hoping he acknowledges the severe injustice that was done in his sanctuary to the Jewish community which, so recently, has experienced acts of murderous hatred in its synagogues.

A version of this story appeared in the May 31-June 13, 2019 print issue under the headline: Zero tolerance for Farrakhan's anti-Semitism.