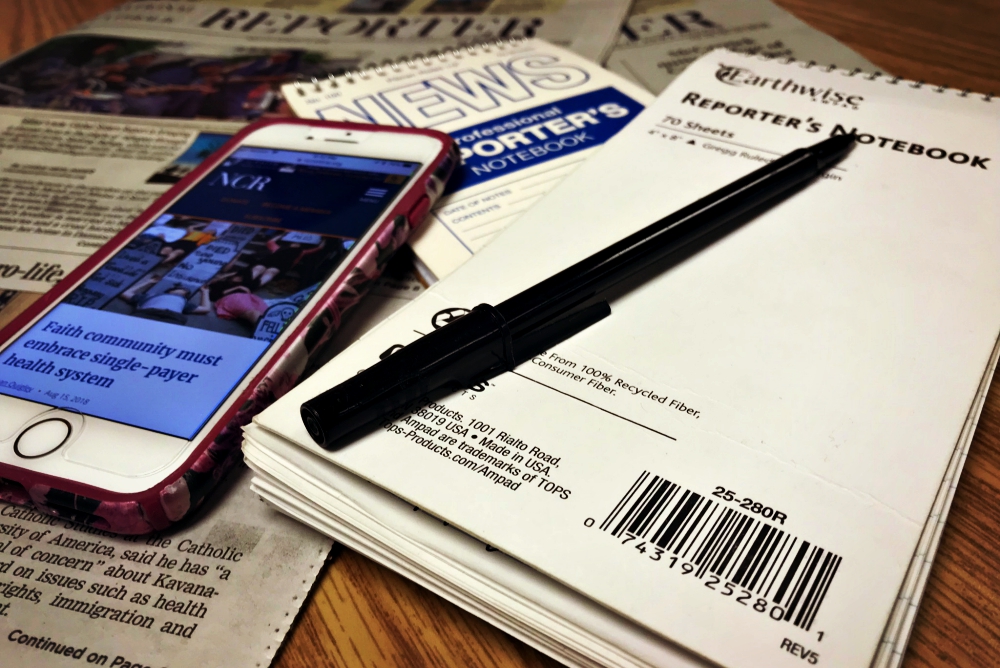 Editor's note: NCR joins today some 300 newspapers and media outlets across the United States publishing editorials about the Trump administration's assault on the media.

The idea began with Marjorie Pritchard, the deputy managing editor of The Boston Globe, in reaction to President Donald Trump's attacks on the media — like at a rally where Trump pointed to journalists covering the event and told the crowd they "only make up stories" and called them "fake, fake disgusting news." On Twitter, he has called the media "the enemy of the people." The president has refused to answer reporters' questions at press briefings and the White House press office has barred journalists who irritate Trump.

Besides the Globe, newspapers participating in the effort include large-circulation dailies like The New York Times, the Houston Chronicle and the Miami Herald, as well as smaller publications like the Oakridger in Oak Ridge, Tennessee, and the Griggs County Courier and Steele County Press in North Dakota.

The Radio Television Digital News Association has joined the Globe in promoting the effort, encouraging television and radio stations to release editorials on their websites or on the air.

Earlier this year, to mark World Communications Day, Pope Francis issued a stern warning against the dangers of "fake news" and an equally firm endorsement of what he called the "journalism for peace."

"By [journalism of peace], I do not mean the saccharine kind of journalism that refuses to acknowledge the existence of serious problems or smacks of sentimentalism," Francis wrote. "On the contrary, I mean a journalism that is truthful and opposed to falsehoods, rhetorical slogans, and sensational headlines."

Journalism must be "at the service of all, especially those — and they are the majority in our world — who have no voice," Francis wrote.

Journalism of service, he said, explores the underlying causes of conflict so as to contribute to its resolution.

Journalism, he said, should be "committed to pointing out alternatives to the escalation of shouting matches and verbal violence."

In this message, Francis spoke profoundly to the needs of our times.

"Within the church, as within civil society, public information is a social necessity. The press performs a social function and this function is indispensable," Murray said at a talk delivered just a few months before NCR published its first issue in October 1964. Murray wrote:

The Catholic free press within the church is not some sort of luxury that is really to be frowned on. It is not a nuisance that has to be tolerated. ... The church, for all her differences as over against civil society, remains a society. And the societal character of the church creates a public right to information about all that concerns the church. ... Through these rights of the people the freedom of the press knows only one limitation, and that is the people's need to know. And I think within the church, as within civil society, the need of the people to know is in principle unlimited.

Our founding editors' and Murray's particular arena was the Catholic Church, but it is easy to see how their beliefs about a free press extend to the wider society. In their inaugural editorial, called "Planks for a platform," our founders spelled out their intent, saying, "Our orientation, then, is toward reporting the news, toward enterprise and relevance, toward dialogue with practically everybody. ... We think this kind of work can be a vocation; one reason it may be our vocation is that we like doing it and think it makes a difference in the world."

Journalists should press our church and civic leaders "for as much information as can be had about events and their meaning," which would require, our founders wrote, "the putting of awkward questions and the printing of awkward facts." We do this not to embarrass or exploit people, but to explain and help the search for solutions — it is our indispensable social function.

To be journalists for peace: That is our duty; that is our vocation. That orientation still informs the work we do some 54 years later.

We don't usually include prayers in our editorials, but in this case, it seems appropriate to end with a prayer Francis included in his message for World Communications Day:

Lord, make us instruments of your peace.

Help us to recognize the evil latent in a communication that does not build communion.

Help us to remove the venom from our judgements.

Help us to speak about others as our brothers and sisters.

You are faithful and trustworthy; may our words be seeds of goodness for the world:

where there is shouting, let us practice listening;

where there is confusion, let us inspire harmony;

where there is ambiguity, let us bring clarity;

where there is exclusion, let us offer solidarity;

where there is sensationalism, let us use sobriety;

where there is superficiality, let us raise real questions;

where there is prejudice, let us awaken trust;

where there is hostility, let us bring respect;

where there is falsehood, let us bring truth.