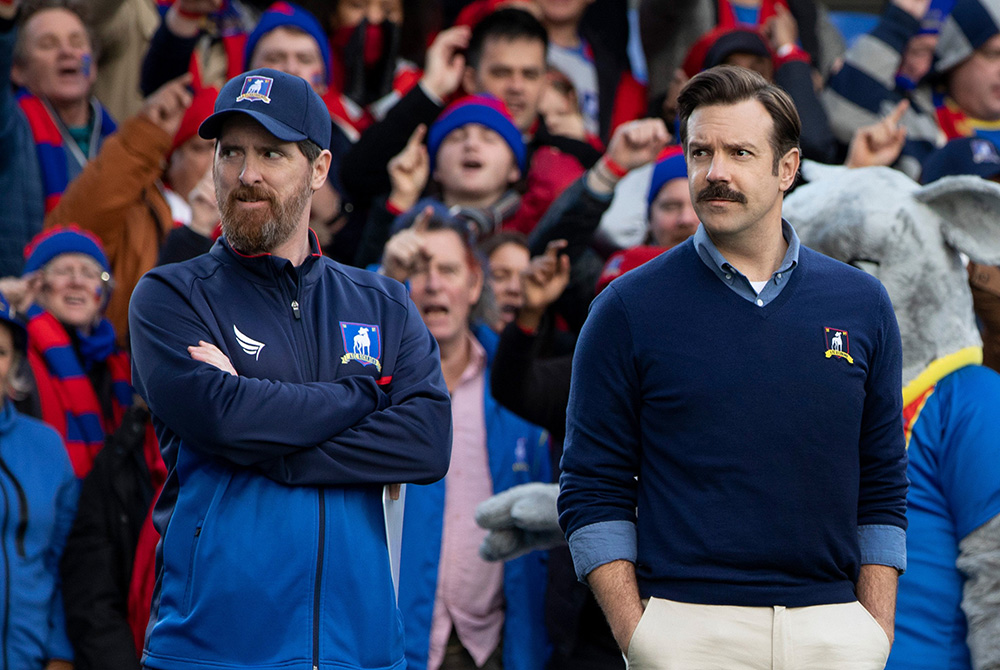 The "fish out of water" narrative genre is as old as storytelling itself. The trope has been around television as long as there have been sitcoms, including in such classic shows as "The Beverly Hillbillies" and "Green Acres." Because it is so predictable, and in many cases reduced to cliche, stories that rely on this premise rarely seem to rise to greatness, at least anymore. But with the arrival of the Canadian television comedy phenomenon "Schitt's Creek" (co-created by and co-starring father and son Eugene and Dan Levy), expectations appear to have shifted recently.

Still, last year when I heard about the new AppleTV+ show "Ted Lasso" (starring Jason Sudeikis and Hannah Waddingham), I was reluctant to give another television show a try that seemed to follow this basic, predictable, tired and uninteresting approach to driving a storyline. The premise seemed boringly straightforward: Ted Lasso is an American college football coach who is hired to coach a British professional soccer team that is struggling to win. Fortunate to have access to the Apple streaming service, I would see advertisements for the show pop up regularly on my screen. But each time it appeared, I would ignore it and move on to something else.

However, despite my skepticism of the genre and disinterest in a soccer-centered story, last month I found myself streaming the first episode. Almost instantaneously I was struck with what a funny, compelling, heartwarming and original show it was. Within 36 hours I had binged all 10 episodes of the first season. And I don't regret a single minute of it.

Lasso is a character almost too kind to be believed. And I didn't at first. Perhaps my cynicism has been elevated because of everything we have witnessed and experienced over the last several years, not least of which has been the current global pandemic that has resulted in half a million deaths in the United States and the unprecedented fracturing of our politics, both civil and ecclesial.

The show's title character seemed at first on the verge of saccharine, a kind of Pollyannaish buffoon who, under the normal rules of television writing, would eventually crack under the pressure of maintaining unbridled optimism in the face of inevitable adversity and hopelessness to reveal his hidden sinister traits.

It's not that Ted Lasso doesn't face professional challenges (we learn that he was originally hired, unbeknownst to him, as part lark and part instrument for sabotage) or family challenges (his marriage is breaking down and he's far away from his young son) or soccer challenges (the team is last in the league, faces internal conflict and is close to being relegated out of its current standing).

What is so moving is the way this man — who is at once more than a buffoon and more hopeful than a Pollyanna and kinder than a saint — negotiates the challenges he encounters.

He sincerely cares more about developing relationships and supporting the full flourishing of each player and staff member on his team than he does about winning or losing (to the frustration of shortsighted competitive colleagues). He is genuinely thoughtful and caring, even when he is the object of derision and scorn, even when he is being set up for failure. He is able to win over the most cynical and selfish people, not through biting argumentation or insult, but through sheer persistence, presence and, dare I say, authentic love.

Oh, and the show is also absolutely hilarious. Even in the writing there is a sense of team camaraderie allowing for the entire ensemble to shine at various points.

While there is no overt religious message, plot or character in the show, I found myself reflecting on how it may very well be the most unwittingly Christian program on air today. I do not believe that Sudeikis, who just won a Golden Globe for best TV actor in a musical or comedy series, or his series-development collaborators ever intended to produce a show that would be taken for conveying a religious message, but that is part of its brilliance. The overarching lessons are shown rather than told, lived rather than preached, and often lighthearted and humorous rather than stuffy, dry, condemnatory or moralizing.

As I continued to reflect on the positive power I believe this show has, I kept thinking about the concept of "anonymous Christianity" developed by the late Jesuit theologian Karl Rahner. While largely misunderstood, the notion of an "anonymous Christian" was Rahner's way of talking about how to balance Christianity's unequivocal assertion that Jesus Christ is the universal savior with the practical realities of religious pluralism or ignorance of the Christ and the Gospel by billions of humans through no fault of their own.

Over the decades, some people have taken issue with the term "anonymous Christian" because it seems to some to either insult people of other religious traditions (by dubbing them "Christians" irrespective of their beliefs or lack thereof) or, as is the case among some skeptical Christians, justify relativism.

On the first point, Rahner intended the phrase "anonymous Christian" to be something of a placeholder for use within the Christian community to account for both how Christ is the universal savior and how God's presence is not limited only to those who consciously ascent to Christian doctrine. He never intended it to be used ad extra or outside of internal Christian reflections on God's action outside of Christian doctrinal frameworks. Since the love of God and love of neighbor are inseparable (e.g., Matthew 25:31-46) and there are plenty of self-professed Christians who regularly fail to live authentic Gospel lives while there are plenty of non-Christians who excel at love of neighbor, there has to be a way to account for how God's mercy and salvation touches the lives of non-Christians.

Similarly, Rahner's whole point in coining the term "anonymous Christian" was to assert the absolute centrality of Christ who, through the paschal mystery, singularly accomplishes our salvation. Therefore, the charge of relativism is absurd. Following the church's teaching in Nostra Aetate, we recognize that Christians do not have a monopoly on God's action in the world, and Rahner sought to unpack how we might conceive of this fact within a pluralistic context.

In an age when the hypocrisy of religious leaders and their myopic focus on culture war issues causes grave scandal to many Christians and non-Christians alike, we might do well to look to other examples of what Christian discipleship looks like in action — even when the terms "Christian" or "religion" or "faith" never appear. While I would never claim that a television program like "Ted Lasso" or any other show is equal to or could be a substitute for the basics of our tradition, I believe the overarching message and example of characters and stories like one finds in this show offer us at least a supplement and a refreshing reminder of what it looks like to live the Gospel of Jesus Christ in practice.

And that is the power of this wonderful show: it invites viewers to imagine another way of being in the world, another set of values to prioritize, another approach to decision-making and relationship-building. This is what the best of Christian preaching ought to accomplish, but so rarely does. To this Christian viewer, the religious valance of "Ted Lasso" is undoubtedly anonymous, but is wonderfully compelling. Plus, it will make you laugh, cry and feel good!

A version of this story appeared in the April 2-15, 2021 print issue under the headline: The anonymous Christianity of 'Ted Lasso'.