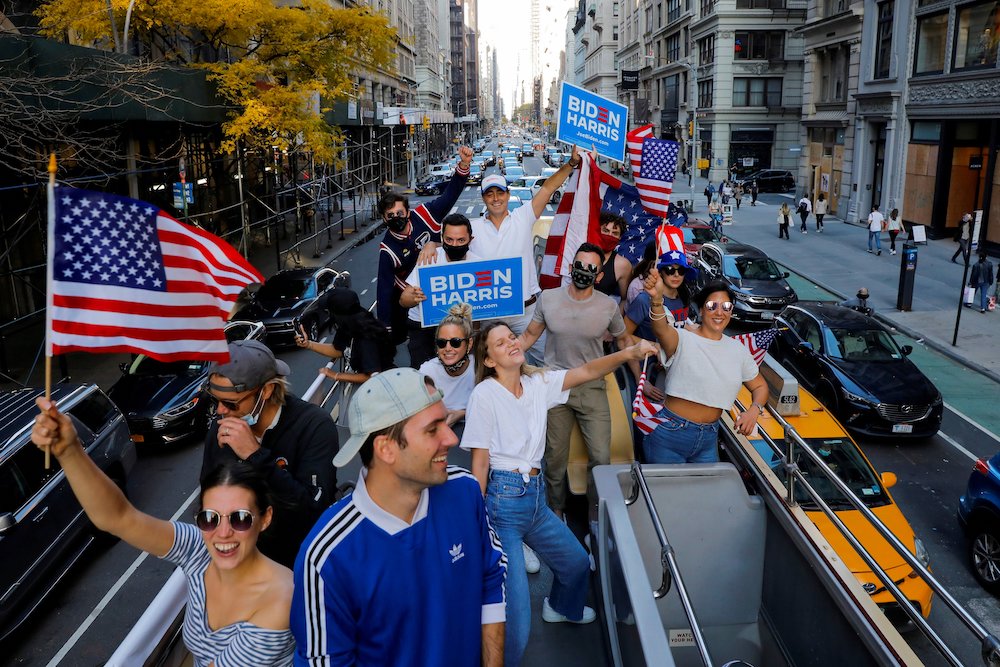 Like so many people last weekend, I was not prepared for the range and intensity of emotions I felt when the United States presidential election was finally called for President-elect Joe Biden. The historic significance of this election continues to settle in, with numerous and symbolic "firsts," not the least of which is Vice President-elect Kamala Harris being the first woman — and first woman of color — to be elected to the vice presidency of a country that only a century ago permitted women to vote and has, from its founding, oppressed and enslaved and erased generations of women of color.

There is so much to celebrate, and many millions of people around the U.S. and beyond spontaneously took to the streets Nov. 7 to do just that. But I am also acutely aware of the deep rift of polarization that persists in our country, which has also infected our church and all other aspects of our communal life together.

While the vote count was not close nationally — as of this writing Biden is on a trajectory to win the popular vote by a margin near 5 million — our outmoded and historically problematic Electoral College system fuels a narrative of profound partisan divide, which results in key states having disproportionate significance and extraordinary tight margins at the local level that can decide the fate of the presidency. With increasingly divergent sources for information divided along pre-selected partisan lines, many people live and think in self-referential silos of opinion and spin.

After the joyful celebration that arose within me at the thought of not having an occupant of the White House whose narcissism, megalomania, ingratitude, mean-spiritedness, anti-intellectualism, racism, sexism and xenophobia (to name just a few) constantly threaten the health, safety and lives of millions of people, the sad reality of the state of our union returned to me like a ton of bricks.

Electing Biden and Harris is a significant starting point, but it is only the beginning of the work of healing a broken nation that has perhaps not seen such division since the end of the Civil War. And there is no immediate guarantee that healing is an assured outcome of the work ahead, but it is nevertheless a possibility, and for it I have hope.

Hope is more than an erstwhile campaign slogan or a Pollyannaish embrace of naïve optimism. Hope in the Catholic tradition is a theological virtue that first refers to our human desire for God but also speaks generally of some good not yet present. As St. Thomas Aquinas explained in his Summa Theologica, "the object of hope is a future good, difficult but possible to obtain."

As a virtue, hope stands as the mean between the two extremes of despair and presumption.

The former vice is what I, and many others, felt brushed up against during the last four years. I am reminded of the powerful and insightful 2017 essay by Ta-Nehisi Coates in The Atlantic, "The First White President: The Foundation of Donald Trump's Presidency is the Negation of Barack Obama's Legacy," in which he precisely captures and contextualizes the zeitgeist of the nation before and during the last administration. Coates describes the deeply imbedded racism and fear that hibernated from sight in polite company, but that was unleashed by the perceived threat of a Black man winning and holding the highest office in the land — twice!

Despair, that giving up of faith in any possible change, is what I felt when I then witnessed an apparent groundswell supporting rhetoric of fear, hate and division in the candidacy and then one-term presidency of Donald Trump. Could anything really change?

The latter vice, presumption, is what the 2016 Clinton campaign seemed to project and, therefore, likely contributed to its defeat. It is also what the 2020 Trump campaign and its supporters seemed to have embraced about an assumed inevitable second term. Presumption is a false certainty, which relies only on oneself to the exclusion of God's grace and support. It is a sort of self-serving fatalism, an approach to possibility that only registers inevitability.

I have been thinking a lot about hope these last few days because President-elect Biden has consistently and clearly spoken from the heart — a heart shaped by personal family loss and robust Catholic faith — about hope. While his framing has been inclusive and open, his understanding of hope has been undoubtedly shaped by it as a theological virtue — striving toward a future good, which is "difficult but possible to obtain."

Biden has long acknowledged his love of the poetry of Seamus Heaney, the Irish Nobel Laureate, and often cites a well-known passage from the poet's 1991 versified adaptation of Sophocles' play, "Philoctetes," titled The Cure at Troy. One of the stanzas regularly invoked by Biden is:

History says, Don't hope
On this side of the grave,
But then, once in a lifetime
The longed-for tidal wave
Of justice can rise up,
And hope and history rhyme.

Biden is no more a messiah than former President Barack Obama was before him, but both men — in stark contrast to the former's predecessor and latter's successor — are sincere, decent, generous people. The invocation of this Heaney stanza reflects that truth and points to a realism grounded in faith, both secular and Christian, that we can be better, we can support one another, we can love, and we can do all this with God's help.

Neither Obama nor Biden are men of despair or presumption, but truly people of hope, which is what makes them such good leaders. The poetic beauty of Heaney's austere verse is that hope can only ever rhyme with history, because hope is never the full realization of divine goodness in this life. But as Jesus Christ proclaimed throughout his earthly ministry, the reign of God that is this full realization is breaking into history here and now, the foretaste of the fullness to come, that is if we who dare to call ourselves Christian do our part. And what does our part look like? Feeding the hungry, clothing the naked, visiting the imprisoned, caring for the sick, welcoming the stranger, and so on (Matthew 25:35-36).

Jesus makes clear the truth of Heaney's poetry, that the possibility of hope and history rhyming rests first in the rise of justice. And that requires a lot of work on our part.

Though the mountain of God's justice we must climb together is steep, the restoration of the dignity to the office of the American president provides but one condition of the possibility to hope that progress toward justice, peace and the integrity of creation can advance. Hope is still an audacious enterprise in a nation and world so torn asunder, but its return is a welcome if recently unfamiliar feeling. And now is the time to put that hope to work again.

[Daniel P. Horan is the Duns Scotus Professor of Spirituality at Catholic Theological Union in Chicago, where he teaches systematic theology and spirituality. His recent book is Catholicity and Emerging Personhood: A Contemporary Theological Anthropology. Follow him on Twitter: @DanHoranOFM]