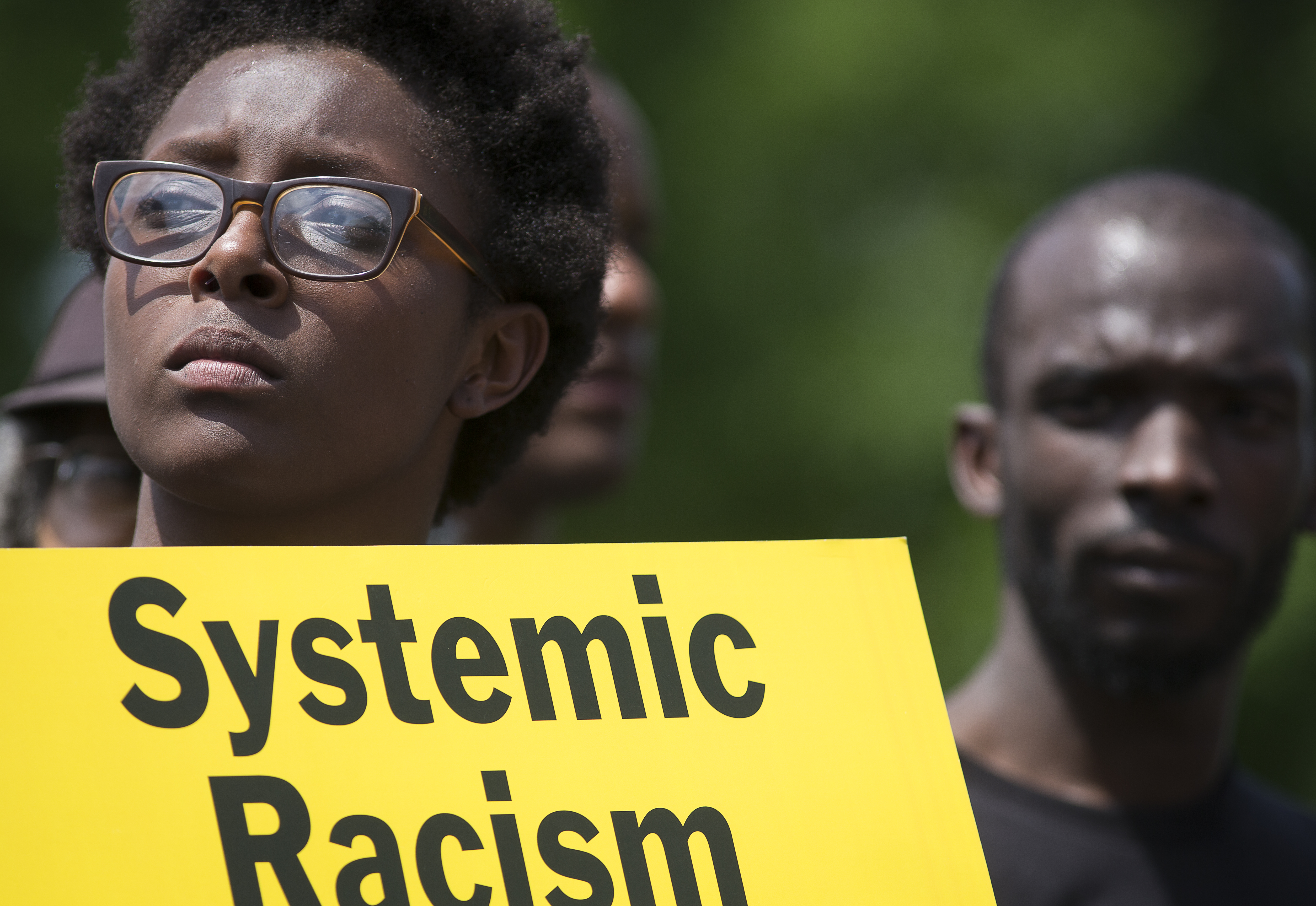 Given that February is designated Black History Month and the United States Conference of Catholic Bishops recently approved a document on racism ("Open Wide Our Hearts: The Enduring Call to Love — A Pastoral Letter Against Racism"), I decided to spend some extra time reflecting on this new document.

It is the first major text issued by the American bishops on racism in 40 years. The last one was the abysmally titled "Brothers and Sisters to Us: U.S. Catholic Bishops Pastoral Letter on Racism." Its title reveals the perception of people of color by many in the Catholic Church in the United States, especially by its predominantly white leadership (presumably the "us" of the title). Such language implies that people of color are effectively outside the community, which is understood to be, as a rule, white. It was as much an ecclesiastical Freudian slip as was this nation's designation of the shortest month of the calendar year to serve as the allotted time to deliberately reflect on African American history and culture.

For decades theologians and pastoral ministers have assessed the 1979 document, highlighting its continued relevance, while also acknowledging its limitations and inadequacies. Fr. Bryan Massingale, a professor of Christian ethics at Fordham University, in his important 2010 book Racial Justice and the Catholic Church, offers an in-depth analysis of the document. While recognizing the importance of episcopal teaching on racism in the United States, he names at least three major deficiencies with the text. First, unlike other pastoral letters on violence and peace, Massingale writes, "Brothers and Sisters to Us is not informed by sustained social analysis. There is no evidence of a formal investigation of the phenomenon of racism." Second, he notes that the theological arguments against racism in the document are weak, that "the teaching lacks an extended theological or ethical reflection upon racism." Third and perhaps most importantly, "the bishops developed no formal plan for implementing the teachings and exhortations" of the document. It was clear that more work needed to be done.

Like so many other people, I had been eagerly awaiting the new text. The rise in explicit racist behavior and hate crimes since the election of President Donald Trump, the overt support of his administration's policies by white supremacists and extremist groups, the anti-migrant rhetoric associated with the building of a southern border wall, and the unabashed refusal to condemn Nazi and white supremacist groups after the 2017 incidents in Charlottesville have only heightened the sense of urgency that the American bishops needed to exercise their teaching authority on this topic.

Last November the bishops overwhelmingly approved the new document. When I first read it, I was struck immediately by both what was said and not said; what the bishops did and failed to do. In general, much of what was said is good, if expressed too timidly. In a way that builds on the 1979 document, "Open Wide Our Hearts" acknowledges the reality of systemic racism, but only introduces it pages after first identifying racism as primarily "when — consciously or unconsciously — a person holds that his or her own race or ethnicity is superior, and therefore judges persons of other races or ethnicities as inferior or unworthy of equal regard." This is not untrue, but it's far from reflecting the comprehensive nature of systemic racism that precedes and socializes individual prejudice. The emphasis on the personal dimension of racism too easily covers over its communal, structural, institutional and ecclesial nature.

While the new document does attempt to expand the horizon of those who are burdened, oppressed or otherwise harmed by racism with three short sections dedicated to Native American, African American and Hispanic experiences, the terms selected and language used here raise some serious questions. In the section on Native Americans, for instance, European colonizers are only referred to as "explorers, then pioneers" and later as "white European immigrants and pioneers." These descriptions recast colonizers as neutral or even heroic figures without sufficient attention to the imperial and ecclesial motivations, practices or legacies once these whites arrived across the Atlantic.

The truth is that racism is a white problem because in this society whites hold the power, establish the institutions and set the social norms.

Furthermore, the sentence construction in these sections is notably passive: "African Americans have been branded," "African Americans were disadvantaged," "Hispanics have been referred to by countless derogatory names," and so on. This raises the most glaring issue I have with the new document. It elicits an uncomfortable question: Who exactly is responsible for the problem of racism? The authors of the document seem to go to great lengths to avoid addressing this head on. Readers of the text are led to believe that oppression, subjugation, genocide, chattel slavery, racist violence, unjust legislation, and so on, merely befell people of color as if by chance.

But the truth is that racism is a white problem because in this society whites hold the power, establish the institutions and set the social norms. And the new document does not come anywhere close to acknowledging or clearly stating this fact.

It is striking that the word "sin" appears at least 14 times in the document and "racism" more than 50, but the terms "privilege" or "supremacy" are never mentioned. When "white" appears in the body of the text, it is only in reference to historical eras long gone — those "white European immigrants" who arrived to find Native Americans, a white priest who disparaged Fr. Augustus Tolton in the 19th century, white parishioners who once upon a time received communion ahead of black Catholics in segregated parishes of yesteryear. While the document states "some have called" racism in the United States "our country's original sin," it nevertheless fails to name the sinner. Whether intended or not, this document does not challenge white Catholics to consider their role in a systemically racist society and church, it lets whites too easily off the hook by failing to name the other side of the coin of racist oppression: white privilege.

The specter that haunts the new document is the unacknowledged reality that racism is a white problem and that while systemic racism does affects everybody, it benefits white folk to the disadvantage of people of color. Most people know that overt racial oppression and discrete racist acts are wrong. Another pastoral document to reiterate this point is not needed. Instead, what is needed — but wasn't delivered — is a strong statement with a clear message exhorting those in the position of social and cultural dominance that they must change if there is any hope of a different future.

People of color are painfully aware of the reality and consequences of systemic racism because they cannot avoid it. However, white folk are often blissfully unaware of their complicity and role in the very same structures of oppression. That's no accident. Institutions, structures and policies in this country have been designed (consciously or unwittingly) to ensure continued white dominance while also occluding the real dynamics at play. The result is that most whites can feel assured of their morally superior status by limiting how we talk about racism to a few overtly racist "bad apples" in society.

What is needed is a strong pastoral statement that encourages frank conversation about the reality of systemic racism and its long, complex, painful and ongoing history in this country. Pastors must be exhorted to preach about this difficult topic that will certainly make white people uncomfortable. However, avoiding the discomfort required to seriously consider social injustice is an abdication of pastoral responsibility. That racism isn't just something from long ago in the South or the "inner city," but deeply embedded and woven into the very fabric of all parts of this country — including predominantly white suburbs, exurbs and gentrified city centers — requires that it be addressed everywhere. Although a serious effect of racism has been the internalized oppression experienced by people of color, racism has been and remains a white problem because nothing will change as long as those who benefit from an unjust system remain vincibly ignorant. It is not enough for the American church to decry the sin of racism; we must dare to name the sinner too.

[Daniel P. Horan is a Franciscan friar and assistant professor of systematic theology and spirituality at Catholic Theological Union in Chicago. Follow him on Twitter @DanHoranOFM]

A version of this story appeared in the May 3-16, 2019 print issue under the headline: Sin without sinners.