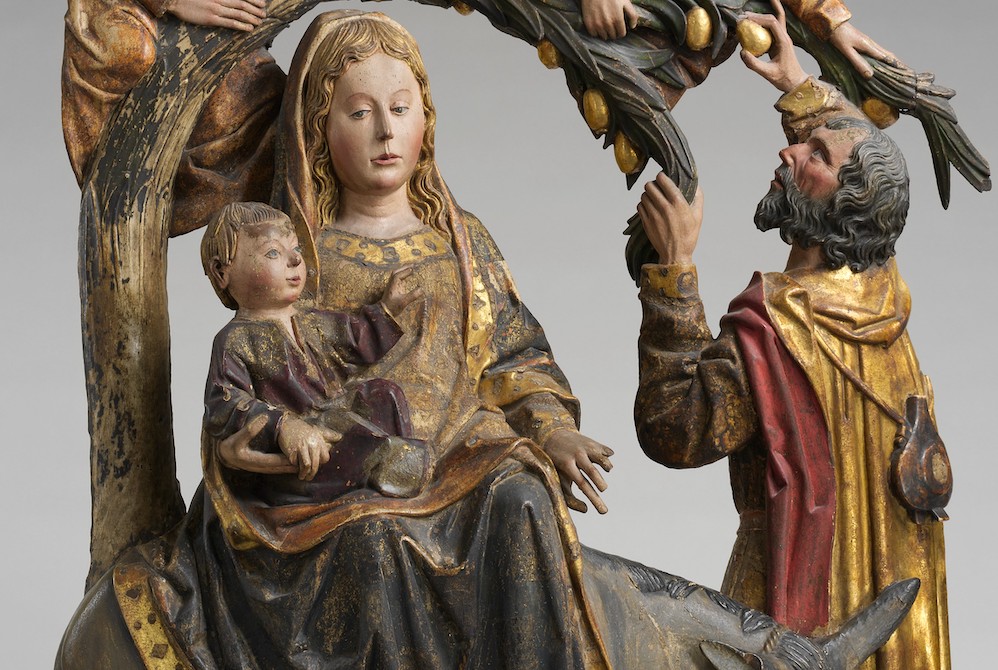 Detail of "The Miracle of the Palm Tree on the Flight to Egypt,"circa 1490–1510 (Metropolitan Museum of Art)

Some people think about a birthday party for the baby Jesus. Others think about the beginning of a short-lived life oriented toward Calvary from the start.

However, I suggest that Christians would do well to refocus our thoughts this Christmas and spend some time reflecting on the humanity of God.

Like many Hellenistic thinkers of old, some readers today will chafe at the juxtaposition of "humanity" and "God" so close together, as if that phrase represented divine insult. Nevertheless, the humanity of God is precisely the scandalous theological truth Christians celebrate each Dec. 25. It's just that so many of us have grown accustomed to brushing past Jesus' full humanity in favor of a potentially more appealing (and unwittingly heretical) view that God was somehow merely pretending to be human — a kind of divine "Undercover Boss" — but did not experience the full range of human life.

In addition to staving off the temptation to embrace Docetism this holiday season, spending some time reflecting on the humanity of God in the whole life of Jesus Christ may also help us appreciate better God's solidarity with our experiences, including those of extreme suffering, fragility and loss. God knows what it's like to be human because, as we commemorate on Christmas, God really became human.

I believe that one of the best guides for reflecting on the humanity of God is a not-too-well-known spiritual treatise by St. Bonaventure, the medieval Franciscan theologian and doctor of the church. One of the most influential and prolific theologians of the 13th century, Bonaventure composed a short text titled The Tree of Life around 1260.

Using the image of a tree with 12 branches, each of which bears a "spiritual fruit" composed of four parts (each part a scene from the New Testament life of Christ), Bonaventure presents 48 short vignettes with simple titles like "Jesus Shown to the Magi" and "Jesus Denied by his Own." Central to each vignette are the rich descriptions Bonaventure offers followed by his direct invitation to the reader to engage the imagination by placing him or herself in the scene described, considering what it would be like to be one of the characters, to meditate as an onlooker, or to envisage what the experience must have been like for Jesus at that moment.

To some readers, this may sound a lot like "Ignatian Spirituality," which is because Bonaventure developed this approach to meditative prayer that Ignatius Loyola and his followers would popularize centuries later. As the late Fordham University theologian Ewert Cousins explained in his introduction to the text, "Bonaventure's The Tree of Life is in many respects a forerunner of Ignatian meditation, in both its subject matter and its techniques." He added, "From one point of view, the Ignatian Exercises can be seen as an initiation into the contemplative vision that Bonaventure proposes."

One particularly apt meditation for Christmas is titled "Jesus Born of Mary." Drawing on details from the Gospels, Bonaventure reflects: "Although he was great and rich, he became small and poor for us. He chose to be born away from home in a stable, to be wrapped in swaddling clothes, to be nourished by virginal milk and to lie in a manger between an ox and an ass."

Focusing on the fragility of the newborn Jesus, Bonaventure then turns to the reader to invite us to place ourselves in the scene.

Now, then, my soul, embrace that divine manger; press your lips upon and kiss the boy's feet. Then in your mind keep the shepherd's watch, marvel at the assembling host of angels, join in the heavenly melody, singing with your voice and heart: Glory to God in the highest and on earth peace to [people] of good will.

The tenderness of the instruction and the attention to the smallest details of human affection — kiss the boy's feet — reflect the instinctual response that any parent or grandparent knows when embracing a newborn child. Yes, the baby Jesus is literally adorable, but what is not lost in Bonaventure's reflection is the actual vulnerability and dependence of Emmanuel, God with us.

Throughout The Tree of Life, Bonaventure traces the public life of Jesus, inviting us along the way to pause and dwell in the moment presented. He regularly directs the reader's imagination with guiding meditative instructions, such as "do not now turn away," "receive the infant in your arms," "become a companion," "attend now" and "breathe in peace now," among others.

For as wonderful as Bonaventure's Gospel meditations and spiritual direction on the life of Jesus are, I find myself thinking about the majority of Jesus's life that is not recounted in the Gospels, what scholars often call the "hidden life" before he began his public ministry. 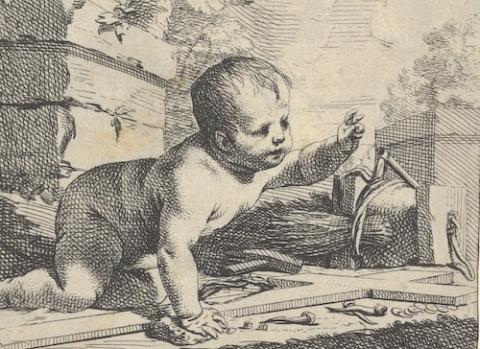 Detail of engraving "The Infant Jesus" by Charles Le Brun, before 1642 (Metropolitan Museum of Art)

What were those long nights, days, months and years like for Mary, Joseph, Jesus and their extended family? How did Jesus feel when he had a cold or an upset stomach? What was it like to be on the run, refugees fleeing from the threat of political violence unleashed by Herod? Did the toddler Jesus know or sense his parents' fear and uncertainty? Did Joseph lie awake in the night, terrified about how he would protect and provide for this family? What were Mary's doubts and fears? Did she try to hide them from her child to protect her young boy from the world's harsh realities like many parents do? And when, as legend has it, Joseph died while Jesus was young, what was it like for Mary to be a single mother?

How did Jesus' laugh sound, and what did he find funny? What pulled at his young heartstrings or made him cry? What was his experience of growing up, of growing pains, of the awkwardness of puberty and his becoming an adult? Long before he had disciples, who were his friends and what were they like? Did he have a teenage crush?

What was Jesus like, how did he work, and what did he think in the years, months and days before the baptism in the Jordan, the miracle at Cana or the pronouncement of Isaiah's prophetic fulfillment at the synagogue in Nazareth?

Who was Jesus before he was that Jesus?

To fully appreciate the significance of what we celebrate on Christmas, these are the kinds of questions we should spend some time asking, praying with and considering. In doing so, we might come to a fuller appreciation of the awe-inspiring action of the God who so loved us that God wanted no barrier between Creator and creature; God would "empty God's self" (Philippians 2:7) to risk all the vulnerability of the human condition without reserve.

On this unusual Christmas during a global pandemic, which has forcefully reminded the human family of our own fragility and finitude, may we enter more deeply into the mystery of God who also knows what the experience of fragility and finitude are like. In those very human moments of joy and hope, sadness and suffering, God understands fully and is with us in the midst of it.