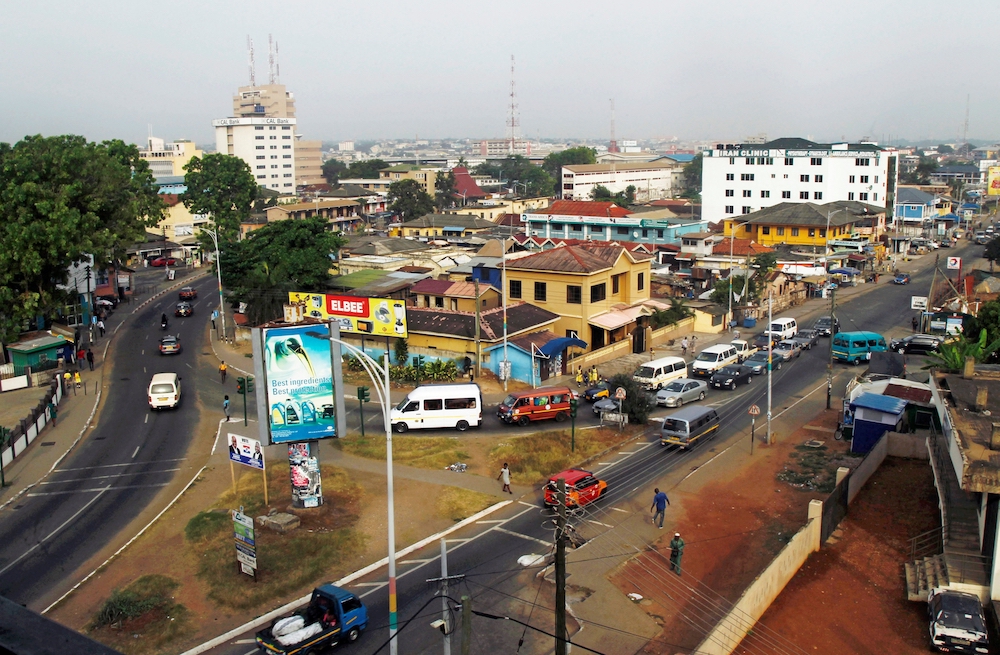 Cars and people travel through a business area in 2016 in Accra, Ghana. (CNS/Luc Gnago, Reuters)

The West African country of Ghana is one of the most homophobic countries in the world today. It not only refuses to recognize same-sex unions, but it also criminalizes consensual same-sex acts with imprisonment of up to three years. Those who are arrested for being gay are then often subjected to further physical, psychological or sexual abuse as a result of their captivity.

A 2018 Human Rights Watch report documents numerous accounts of horrendous anti-LGBTQ abuse and "corroborates that LGBT people are often victims of mob attacks, physical assault, sexual assault, extortion, discrimination in access to housing, education and employment, and family rejection on the grounds of their sexual orientation or gender identity. In an environment in which homophobic views abound, and few are willing to publicly come to the defense of LGBT people, it is easy for violence to flourish."

Not only have LGBTQ individuals been targeted, harassed, denied basic human rights and assaulted because of their sexual orientations or gender identities, but those who have sought to advocate on their behalf through education programs or resource centers have now become the target of comparable treatment and discrimination. In February, Kojo Oppong Nkrumah, a member of parliament and the Ghanaian minister for information, went so far as to propose formal legislation that would make advocacy on behalf of LGBTQ persons illegal.

Even though such legislation has not yet passed, last month 21 people were arrested in a hotel in the southeastern Ghanaian city of Ho under police suspicion that they were, according to Reuters, "promoting an LGBT+ agenda at an unlawful assembly." Reuters reported that the sponsoring organization, Rightify Ghana, a human rights and advocacy group based in Ghana, "said the group had met to share insight on how to document and report human rights violations being experienced by LGBT+ Ghanaians."

While the 21 people detained by Ghanaian authorities were scheduled to appear in court on June 4 for a decision on their bail application, the court announced instead it was delaying its ruling, which results in these human-rights activists being detained further without due process.

Reports make clear that this sort of intensified crack down on LGBTQ persons and human rights advocates began earlier this year when Ghana's first LGBTQ community center was opened in February but was forced to close three weeks later due to homophobic pressure from politicians, antigay organizations and, you guessed it, church leaders.

According to the 2010 census, more than 70% of Ghanaians identify as Christian, making the rampant homophobia and anti-LGBTQ attitudes, laws and violence an inherently Christian problem. In an interview with the BBC, Anima Adjepong, a Ghanaian sociologist who is based in the United States, said: "The church also advances this argument that queer people in Ghana are abhorrent. And really the church promotes violent discourse against queer people about 'throwing them into the ocean', about how they 'don't belong here', about how they're 'bringing the downfall of the society'."

Church leaders and self-identified Christians from across the denominational spectrum are largely responsible for this anti-LGBTQ hatred and violence, given the overwhelming Christian makeup of the Ghanaian population and the outsized influence of church leaders, but this is also a disturbingly Catholic problem that the global church must address.

Back in late January the Ghana Catholic Bishops Conference, or GCBC, issued a public statement calling for the government to shut down Ghana's first LGBTQ community center. In this effort the bishops joined forces with an established Ghanaian anti-gay hate group known as the "National Coalition for Proper Human Sexual Rights and Family Values," which was founded in 2013 and is supported, in part, by wealthy foreign sponsors such as the U.S.–based network "World Congress of Families," which both the Southern Poverty Law Center and the Human Rights Campaign have identified as a hate group.

The GCBC statement says, in part, "We, the Catholic Bishops of Ghana, write to condemn all those who support the practice of homosexuality in Ghana. We also write to support the position of Lawyer Moses Foh-Amoaning and the Coalition who for years has been championing the crusade against homosexuality. We also commend other individuals who have spoken in condemnation of this practice. We do this because the Roman Catholic Church is opposed to this abominable practice."

The Ghanaian bishops have unequivocally participated in and promoted the dehumanization of LGBTQ persons, which has resulted in increased discrimination and violence. Without irony, like so many homophobic church leaders elsewhere around the globe, the GCBC added a familiar, if farcical, disclaimer in the body of their hate speech: "it is not right to subject homosexuals to any form of harassment simply because they are homosexuals. The intrinsic dignity of each person must always be respected in word, in action and in law. Homosexuals must be accepted with respect, compassion and sensitivity."

That so many church leaders cannot see the inherent contradictions of their statements that at once foment hatred and violence through dehumanizing rhetoric and distorted worldviews while also pretending to uphold the dignity and value of all people continues to be a troubling practice. And, to be clear, this is not a distinctively Ghanaian problem.

There are far too many nations and communities around the globe in which members of the LGBTQ community are not safe to be themselves and to live an open life of human flourishing. This is especially true for the transgender community in general, and trans women of color in particular.

Last weekend, the College Theology Society, a professional association of college and university professors of theology and religious studies, held its annual convention (its 67th such meeting) online for the second year due to pandemic restrictions.

The theme this year was "The Human in a Dehumanizing World: Re-Examining Theological Anthropology and its Implications," which was developed by me and my colleague and co-chair of the convention Jessica Coblentz, an assistant professor of religious studies at St. Mary's College in Notre Dame, Indiana.

As one of the co-chairs of this year's conference, I have been disturbed by the pervasive phenomenon of dehumanization, especially the reports of increasing dehumanization of LGBTQ persons leading to abuse and violence in Ghana.

During this annual LGBTQ Pride Month of June, which is a time to celebrate the beautiful diversity of God's creation within the human family, let us call to mind the manifold ways church leaders and everyday Christians blaspheme the sacred name of God and defame the church of Jesus Christ by using distorted views of scripture and tradition to justify crimes against humanity. May Christians and all people of good will stand up to anybody who violates the inherent dignity and value of all people through dehumanizing rhetoric and actions, whether in Ghana, the United States or anywhere else.

A version of this story appeared in the July 23-Aug 5, 2021 print issue under the headline: The church's complicity in dehumanizing the LGBTQ community in Ghana.