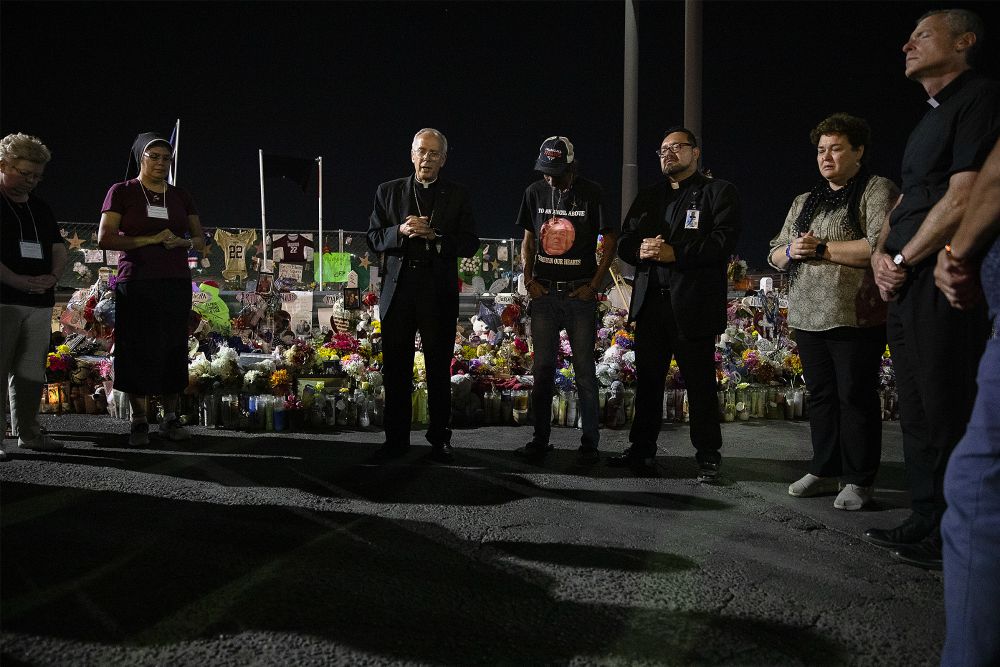 Within the first paragraph of his recent pastoral letter on racism, "Night Will Be No More," El Paso Bishop Mark Seitz independently accomplished something that the U.S. bishops' conference as a collective episcopal body did not have the moral fortitude to do last fall: he named the reality of white supremacy in the United States and directly addresses the historical and persistent violence of systemic racism in our midst.

Seitz situates his own pastoral teaching within the context of the local church of El Paso, which suffered "a massacre or matanza, that left 22 dead, injured dozens and traumatized a binational community." But the particularity of El Paso's tragedy is precisely that which makes it universally relevant for the whole country. White supremacy is not merely a phenomenon found in the discrete instances of mass violence or racially motivated crimes, nor is it limited to the hateful worldviews and rhetoric of individuals and groups who overtly espouse racial animus. White supremacy is the ideology that grounds and perpetuates the systemic racism at the core of our nation's institutions, cultures, politics and even our faith communities.

This is something that comes through loud and clear in the pastoral letter. In the document's first major section, which is dedicated to defining racism (something the U.S. bishops' conference 2018 document "Open Wide Our Hearts" did inadequately), we read:

If we are honest, racism is really about advancing, shoring up, and failing to oppose a system of white privilege and advantage based on skin color. When this system begins to shape our public choices, structure our common life together and becomes a tool of class, this is rightly called institutionalized racism. Action to build this system of hate and inaction to oppose its dismantling are what we rightly call white supremacy. This is the evil one and the 'father of lies' (John 8, 44) incarnate in our everyday choices and lifestyles, and our laws and institutions.

How is it that Seitz could get this so right, while it seems that so many of his brother bishops have gotten it so wrong or have said nothing at all? He is not the only bishop to face the horrors of gun violence or the consequences of racist policies in law enforcement practices, to name but two. Yet few seem able to muster the moral courage to address these realities directly.

In fairness, there have been a few bishops who have gone out of their way to issue documents on racism. For example, I think of Emeritus Bishop Dale Melczek of Gary, Indiana, who in 2003 wrote "Created in God's Image: A Pastoral Letter on the Sin of Racism and a Call to Conversion," in which he addresses the role of white complicity in systemic racism and acknowledges the relationship between white privilege and structural injustice.

One thing both Seitz and Melczek have in common is the willingness to draw on some of the best sources, especially works by theologians of color that address these realities head-on. The El Paso document cites Fr. Bryan Massingale of Fordham University; the Gary document begins with a footnote referencing Cornel West of Harvard University.

In addition to the directly identifying white supremacy and engaging with key theologians in the field, Seitz's pastoral letter not only names the sin of racism but also names the sinners. Whereas the U.S. bishops' document last fall only addressed the history of racism in the United States obliquely and by means of awkward passive constructions ("African Americans were disadvantaged," "Hispanics have been referred to by countless derogatory names," etc.), the El Paso document states the truth plainly by recounting "the history of colonization" and naming the "Spanish colonists" with whom the church was complicit in the sins of racist oppression.

By tracing the history of racism and white supremacy in North America back to at least the 17th century, Seitz rightly demonstrates how racism is indeed this country's "original sin" present as it has been from the first encounters of European colonizers with the native peoples of this hemisphere. While he doesn't mention German theologian Fr. Johann Baptist Metz by name or invoke Metz's notion of "dangerous memory," Seitz prophetically calls the church to face its own history of complicity, domination and sin.

Seitz not only offers a historical survey, he also addresses the scandalous governmental policies and political rhetoric that reinforce the lie of white supremacy and broaden the wounds of anti-Black and anti-Latinx racism today. Though he does not explicitly identify President Donald Trump by name, choosing more often instead to use euphemisms like "highest officials," he takes direct aim at the current president's obsession with a southern border wall. Seitz describes the proposed wall accurately as a symbol of racism and "a monument of hate."

It is not just a tool of national security. More than that, the wall is a symbol of exclusion, especially when allied to an overt politics of xenophobia. It is an open wound through the middle of our sister cities of El Paso and Ciudad Juárez. The wall deepens racially charged perceptions of how we understand the border as well as Mexicans and migrants. It extends racist talk of an 'invasion'. It perpetuates the racist myth that the area south of the border is dangerous and foreign and that we are merely passive observers in the growth of narco-violence and the trafficking of human beings and drugs. The wall is a physical reminder of the failure of two friendly nations to resolve their internal and bi-national issues in just and peaceful way.

This document is as theologically rich as it is pastorally inspiring. The last two sections of the text draw on Mariology, particularly the intercultural promise and challenge of Our Lady of Guadalupe, and the theology of resurrection to form a truly Catholic foundation for pastoral outreach and advocacy. The beauty with which Seitz engages the cultural heritages of the people of El Paso and ties the lived realities of Christian women and men with the core principles of our faith tradition is a model for what every pastoral document should be. The result is a sober, reflective, challenging and inspirational document that shines a light in the darkness of our current context.

It is my hope that Seitz's brother bishops across the United States will open wide their hearts to read this document with humility and follow the model of leadership and pastoral care that it conveys.