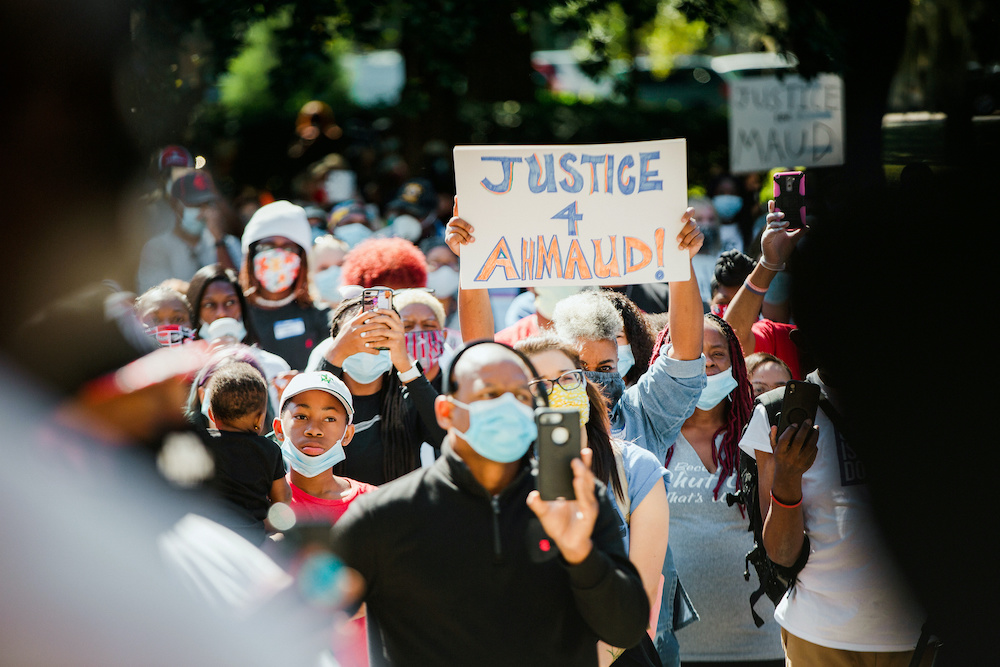 Supporters of the Georgia NAACP in Brunswick, Georgia, wear protective masks May 8 during a protest about the February murder of Ahmaud Arbery, an unarmed young black man shot after being chased by a white former law enforcement officer and his son. (CNS/Reuters/Dustin Chambers)

It's worth remembering that the Gospels consistently portray Jesus Christ reserving his harshest criticism and condemnation for religious hypocrites. Those who say one thing yet do another, particularly under the cover of religious beliefs or the guise of moral superiority, enraged Jesus and triggered a divine righteous anger that was not shown even to thieves and adulterers.

Given the current state of the behaviors, beliefs and policies of many self-identified Christians today, I believe we need more of the righteous anger that Jesus modeled. The challenge is for Christians to take seriously the name we dare to appropriate for ourselves, claiming by our religious affiliation the status of a follower of Jesus Christ.

Addressing religious hypocrisy begins with self-examination to be sure, but it can't stop there. We have to hold one another accountable, and perhaps the greatest transgression that has gone largely unchecked today is the widespread dehumanization of particular groups of people. Often these groups are already vulnerable or minoritized communities, made more susceptible to violence or subjugation by the rhetoric and agendas of self-styled Christians who appear to see no apparent contradiction in their claim to follow Christ and the way they express their views and live out their lives.

Like the religious hypocrites Jesus condemned in his time, those in our time seem to operate with an agenda driven only to serve themselves and those with whom they choose to affiliate. Such self-identified Christians deploy strategies to "other" individuals and groups they view as a threat to their own comfort, sense of self-importance and superiority, power, political hegemony or financial security.

As my colleague Michael Sean Winters noted earlier this week, the driving force behind such blatant hypocrisy — among church leaders as much as rank-and-file Christians — is often sectarianism rather than Gospel values. If it is personally expedient to curry favor with political movements or parties, these Christians will sacrifice the Gospel at the altar of self-preservation and personal advancement.

Fear and favor are powerful motivators, and these are often the incentive behind dehumanizing practices that have real consequences, cost human lives, and is anything but "pro-life."

Take, for instance, the persistence of anti-black racism in the United States. That this country is inherently governed by an illogic of white supremacy is without question. But its perpetuation and maintenance are not necessarily foregone conclusions. When confronted with the realities of racial injustice, white Christians are called to self-examination.

As the Catholic moral tradition has long taught, it is not only the sins of commission for which we are responsible, but also the sins of omission — what we have done and what we have failed to do. Part of why so many white Christians fail to see what is so obvious has to do with the fear of admitting culpability and the Gospel imperative for metanoia, or ongoing conversion. This failure was on full display recently in the behavior of some American prelates whose sycophantic relationship to President Donald Trump, arguably the least Christian U.S. president in modern history, lacks the necessary self-awareness expected of Christian leaders. Olga Segura addresses this well in her recent NCR article, "Do US bishops really believe black lives matter?"

But beyond the unwillingness of many white Christians to open their eyes to the reality before them as it concerns racial injustice in general and their part in it specifically, others engage in a more insidious form of sinfulness: the active dehumanization of people of color. This can be seen in the way some white Christians have responded to the murder of Ahmaud Arbery in Georgia, which occurred in February but only recently gained national attention following the public release of a video. Social media posts are replete with defenses of the alleged murderers — a white father and son — and, unsurprisingly, Second-Amendment boosterism.

This form of dehumanization is not limited to the passive and active contributions to racial injustice in the U.S. context, but can be seen with regard to a number of populations. LGBTQ persons, for example, are regularly condemned, rejected, dismissed and even physically harmed by self-identified Christians claiming that God hates LGBTQ folks and that their very existence is "intrinsically disordered."

In the wake of the attacks of Sept. 11, 2001, and the subsequent protracted wars in Afghanistan and Iraq, there has been a steady rise of Islamophobia. Many Christians reject the shared monotheistic ancestry they and Muslims enjoy as Abrahamic traditions, insisting that Muslims are not our sisters and brothers, seeking instead to dehumanize them and cast Muslims as "the enemy."

Similarly, despite the call to "never forget" the Shoah, anti-Semitism is still on the rise 75 years after Soviet troops liberated Auschwitz. Violence against the Jewish community by Christians continues in many parts of the globe, including the United States, despite authoritative documents such as Nostra Aetate, which the Catholic Church promulgated 55 years ago this year.

Over the last four years, we have seen unprecedented dehumanization in terms of the rhetoric and policies of the Trump administration and its Republican supporters. While I agree with the premise of The Washington Post columnist Jennifer Rubin's assessment that the GOP is not the "pro-life party" it claims to be, I have little faith that many Christians — Catholic and Protestant alike — will change their support for a party that has made white self-assertion and the aggrieved oppressor its unspoken political platform. Jonathan Metzl's 2019 book Dying of Whiteness: How the Politics of Racial Resentment is Killing America's Heartland backs up my pessimistic assessment.

As my recent reading of Patrick Radden Keefe's excellent book Say Nothing: A True Story of Murder and Memory in Northern Ireland about the "Troubles" in the latter decades of the 20th century has reminded me, Christians have even engaged in dehumanizing one another to violent and tragic ends. No one is spared, not even Christians themselves.

Each and every act of dehumanization is not only unchristian, but it is also sinful. In the case of self-identified Christians engaging in this behavior, they expose themselves as the modern iteration of the religious hypocrites Jesus admonished and condemned.

Today, just as in every generation that preceded us, we need to embrace our baptismal vocation to live the Gospel and follow in the footprints of Jesus Christ, which demands the at times risky and unpleasant responsibility of naming injustice, condemning dehumanization and calling our Christian sisters and brothers to task for what we have done and for what we have failed to do. While the responsibility is all of ours, the most pressing duty belongs to church leaders. If they continue to fail at this, then they no longer serve Christ but instead become mere sectarians who align themselves with those whom Jesus unequivocally denounces.