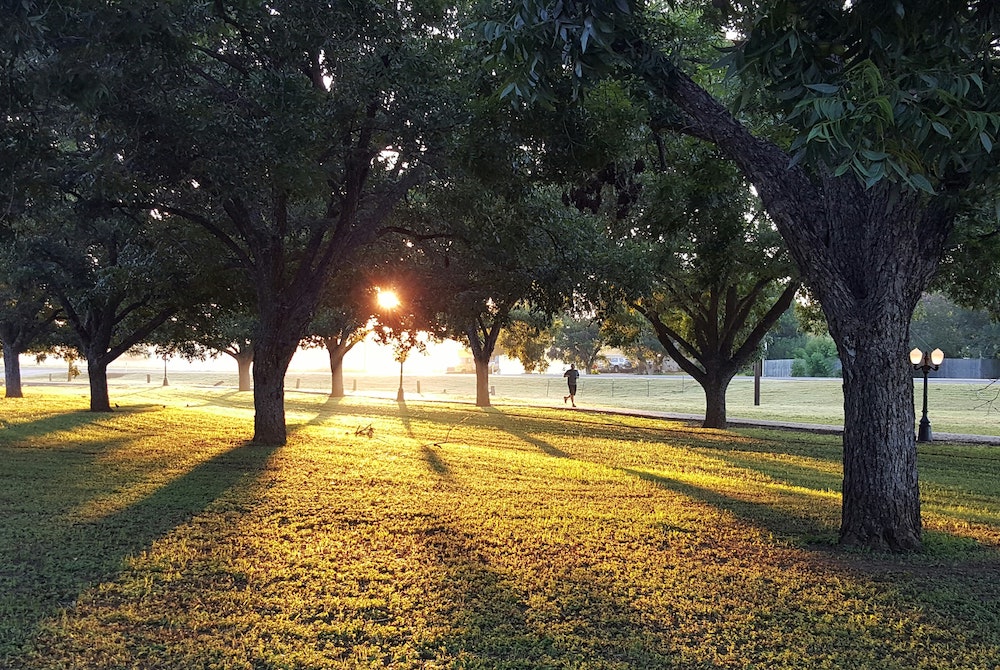 Each white person's eventual awareness of the reality of white privilege is particular to his or her own experience. Some realize it immediately in an encounter or event that strikes them with the force of a lightning bolt, yet for others it is a more gradual awakening to the facts of racial injustice in our society.

Still, most white people work very hard — often unconsciously — to deny the truth of systemic racism and white privilege despite its ubiquitous presence and immediacy, despite all the ways whites in the United States benefit from their perceived race. For me, one thing that has forced me to recognize my own white privilege on a regular basis is running.

My favorite and most consistent hobby, running is an activity I have enjoyed for decades. Before the current coronavirus pandemic, when I used to travel regularly for speaking commitments or meetings, I would run in whatever location I found myself. In places I have visited frequently, I often have several running routes in my mind and ready to go whenever I happen to be in the area. Running is a great way to see new places, to learn the lay of the land, to observe the local communities, and to have fun while exercising at the same time. If I decide not to listen to music on my run, it can also be a wonderful and peaceful time to think and pray.

Some people may be confused at this point, wondering what being a runner and running in so many different places has to do with race or racism or white privilege. Over time, many people, including me, have become increasingly aware of disparities regarding safety and comfort among runners, particularly when gender is considered. However, many white people still do not recognize the role of race in the same situation. As with everything in a country and world afflicted by racial injustice, one's perceived race affects all aspects of being-in-the-world, including simple and innocent activities like going for a run. For some people, because of the color of their skin, the very ability to run in a new location or in some parts of one's own country can be as simple as choosing to do so — that has been my experience as a white man. However, if you are a Black, Latinx or Asian person, such a simple activity could result in a life-or-death situation. Just take the case of Ahmaud Arbery, the 25-year-old Black man who was murdered by white vigilantes while he went for a run Feb. 23 near Brunswick, Georgia. 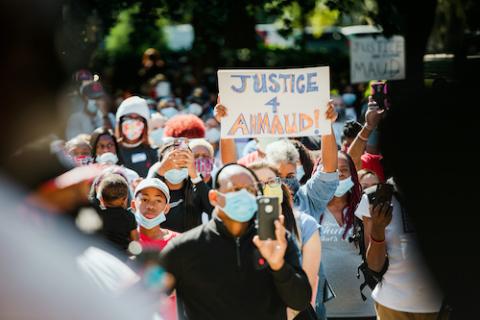 Supporters of the Georgia NAACP in Brunswick, Georgia, during a May 8 protest against the February murder of Ahmaud Arbery. (CNS/Reuters/Dustin Chambers)

I have thought of Arbery nearly every day for the last few months. I think of him because he died doing what I do nearly every day — and I do it without giving a second thought, without fear of being shot, without being perceived as suspicious, without being questioned for belonging in any particular location, and without worrying whether I will be the victim of violence or discrimination on account of the color of my skin. My biggest fears while running are usually traffic and unleashed dogs. But I have never had to worry about my physical safety or second-guess whether I "belonged" in a given neighborhood or city. That is what white privilege means, it is an unearned and unsolicited license to do what I like, where I'd like, and when I'd like without any reasonable fear that the color of my skin would be viewed as threatening or justification for violence against me.

Don't get me wrong; running is not at all the only instance where I recognize the disparity in treatment between people of color and me. Over the years, I have come to see the dozens of daily benefits my perceived whiteness affords me, many of which are the ways I am spared of certain kinds of judgment, harassment, threats and discrimination. The most common privilege of whiteness in America is freedom, actual freedom to simply be and to live, freedom that is not afforded to people of color in our society both structurally (in our nation's laws and policies) or practically (in the persistence of discrimination and racial animus). But running is one interesting case that I think about often and have for many years even before Arbery was senselessly hunted down and killed doing what he and I both loved to do.

Running while white means always "belonging." Last weekend, I visited Dubuque, Iowa, to baptize the children of my friends, and it was the first time I had stayed outside of Chicago overnight since the pandemic began. On Saturday morning, I woke up and went for an 8-mile run along a nice paved public trail on the north side of the city. During the course of my run, I must have seen upward of one hundred people cycling, running and walking on the trail. The most striking thing about the people, diverse in age and gender only, was that I never saw a single person of color. Everybody out there was white.

In true Midwestern form, everybody seemed friendly and kind, waving to me and occasionally shouting an encouraging word while passing me on his or her bike. But during that run, I kept thinking about what it might be like if I were Black and doing exactly the same thing — a person of color running in a sea of white people, in the woods, on a Saturday morning. What would that have been like? Would I have even gone for the run, having first considered the risk of potential violence or other harm? Would the cyclists and other runners have waved to me, said hello, smiled as they did in my actual experience, or would they have kept to themselves, wondered internally or even out loud what I was doing there, wondering if I somehow posed some kind of threat, wondering whether I "belonged" there?

Running while white means I won't be harassed or killed. While running in the past I have been hit twice by cars — both moving very slowly at an intersection when the absent-minded drivers failed to look both ways before accelerating — and both times I was generally unharmed. I have also sprained my ankle while running, having to hobble home in pain and discomfort. But I have never been physically or verbally threatened while out for a run. I have never been followed or harassed. There have been times when I felt uncomfortable because of my surroundings, usually because I wander off my pre-planned course in a new city and I do now know where I am or recognize how to get home. One time, while running in rural North Carolina, I ran past a number of dilapidated homes along a country road sporting confederate and "Make America Great Again" flags. It was a location far more rural than that of the Georgia county where Arbery was killed, and it was frightening because I was a stranger from "the north" whose worldview clashed with the symbols of bigotry on display.

However, the worst I was likely to face was curious neutrality from the white folks who lived there. Avowed racists would view the color of my skin as an admissions ticket to be left unharmed, left to run where I pleased because, after all, "this is America." Despite my internal disgust and discomfort at the racist symbols around me, my whiteness provided me with cover not granted to people of color. I wondered what my experience might have been like if I were Black. If I were as uncomfortable and afraid as I was, and I was a white man, how terrifying might that context be for someone who doesn't benefit from white privilege?

Running while white confronts me with a choice. One of the insidious consequences of white privilege is that it simultaneously benefits white people and covers over its own existence from easy view. It's a lot like the 1998 movie "The Truman Show" starring Jim Carrey, where the title character (Truman) has been an unwitting reality TV star from birth. His whole world appears perfectly normal and natural, but it's all a lie. It isn't until he starts to notice the little cracks in the production façade, the inconsistencies and oddities that don't align with what he had previously believed that he comes to see the truth: he's been living in a false reality.

White people like me have a choice, Truman's choice: to pretend our experience of the world is the normative and universal experience or see that systemic racism benefits people like me and disadvantages people of color. The simple act of running is one daily reminder for me of this phenomenon, but it may be something else for you. The question isn't whether white privilege is real or not; it's whether you have eyes to see it and ears to hear it (Matthew 13:16).