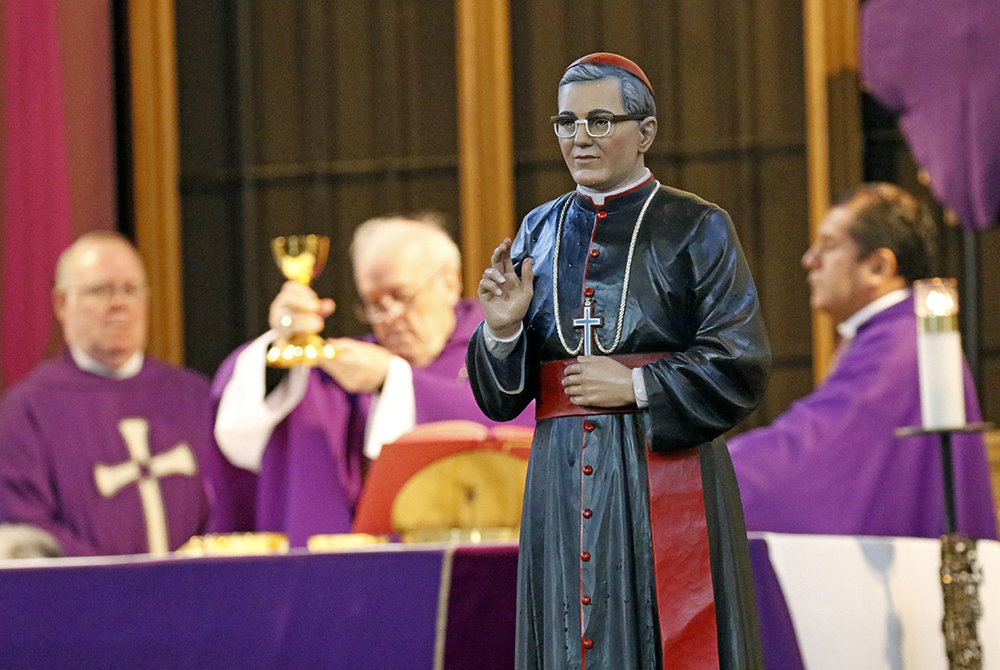 A statue of St. Óscar Romero is seen during a Spanish-language Mass at St. John-Visitation Church in the Bronx, New York, March 24, 2019, the feast of the saint. (CNS/Gregory A. Shemitz)

What the Catholic Church in the United States needs today are more bishops like St. Óscar Romero, the archbishop from El Salvador, who was murdered by right-wing militants while celebrating the Eucharist in 1980. He was silenced for speaking out on behalf of the people entrusted to his pastoral care and consistently denouncing the military dictatorship perpetrating unspeakable crimes against the population.

Enough ink has been spilled in this publication and others about the continual decline of the U.S. Conference of Catholic Bishops in respectability and its growing loss of moral authority. There is plenty of commentary about how the bishops' conference has so intertwined itself in the partisan politics resulting from a kind of Faustian bargain it made in recent decades with the political right — ostensibly for the sake of judicial appointments and anti-abortion policies — such that, as a collective body, it has little moral ground to stand on and appears rudderless in the sea of crises facing society and the church today.

I am not interested in focusing more attention on bad actors, even those who think they are operating with the best of intentions. And I'm not sure what else needs to be said on this matter. Instead, with an eye toward constructive contributions in addressing our sad state of affairs, I think it would behoove us to consider models of effective pastoral leadership, which brings me to Romero.

I have always been an admirer of the martyred archbishop. Captivated as I was with the eponymous 1989 film when I first saw it as a teenager, his story and witness have continually inspired me. Among my most beloved books is the six-volume collection of Romero's homilies in English translation, appropriately titled: A Prophetic Bishop Speaks to His People.

Ordinarily, reading his full homilies or even excerpts from them can be a powerful booster shot of faith, bolstering my vocation while also challenging me to be a better disciple of Christ. But lately I have been turning to Romero's words as an oasis of authentic pastoral wisdom in the desert of American ecclesial leadership. 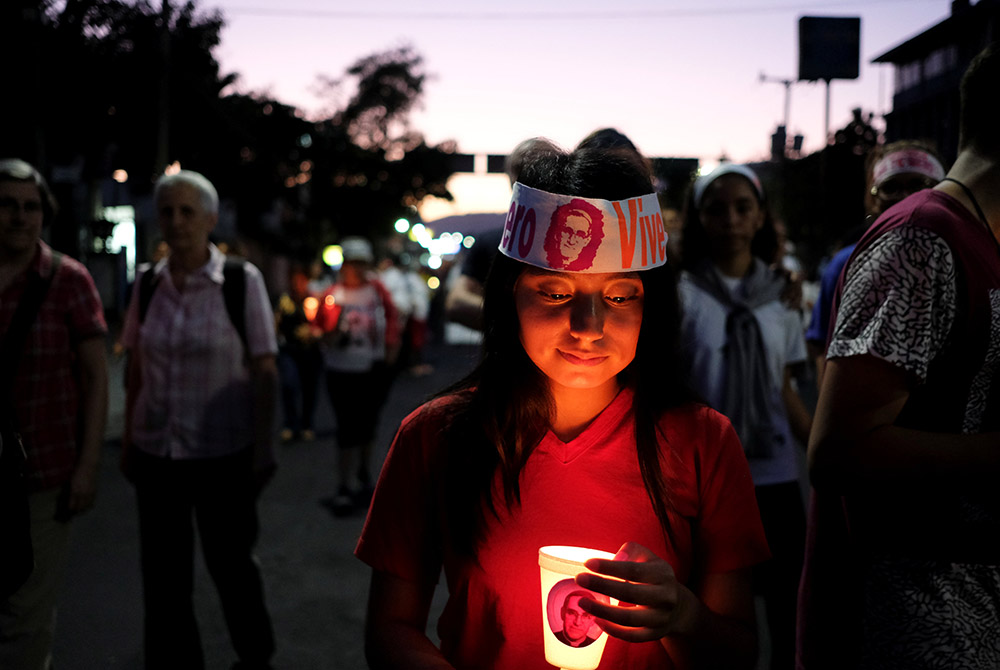 A woman holds a candle during a March 23, 2019, procession to commemorate the 39th anniversary of the murder of St. Oscar Romero in San Salvador, El Salvador. (CNS/Jose Cabezas, Reuters)

Famously, Romero was not at first a vocal critic of social injustice or especially interested in the lives of the most vulnerable people in his community. He experienced a significant conversion, which was prompted by his inescapable reckoning with the political violence that affected not just the abstract "people" of the country, but also those close to him, including priests and other ministers.

His conversion was occasioned by his learning to listen to the suffering people entrusted to his spiritual care, and not by alignment with the powerful and politically ascendant in his country. He came to more and more fully recognize that God identifies with the poor and downtrodden, not the wealthy and connected.

While some of his episcopal colleagues insisted on celebrating the sacraments and preaching anodyne sermons that would ruffle no feathers, as if everything were normal while thousands were "disappeared" and tortured, Romero came to see from his proximity to the people he shepherded — "smelling like his sheep," as Pope Francis would now say — that their suffering, their experiences, their wisdom and their insights should govern his preaching and pastoral priorities.

In turn, he came to see the pervasiveness of the social sin that affected all sectors of the country and realized the interconnectedness of poverty, violence, oppression and torture. As Fordham University theologian Michael Lee notes in his book Revolutionary Saint: The Theological Legacy of Óscar Romero, "Repeatedly in his writing and preaching we see a call to conversion as recognizing (seeing) social sin and committing oneself to struggling against it."

This insight comes through strongly in a homily Romero delivered in April 1978, two years before his martyrdom:

A church that doesn't provoke any crises, a gospel that doesn't unsettle, a word of God that doesn't get under anyone's skin, a word of God that doesn't touch the real sin of the society in which it is being proclaimed — what gospel is that? Very nice, pious considerations that don't bother anyone, that's the way many would like preaching to be. Those preachers who avoid every thorny matter so as not to be harassed, so as not to have conflicts and difficulties, do not light up the world they live in. … The gospel is courageous; it's the good news of him who came to take away the world's sins.

Romero's ecclesiology was profoundly orthodox, rooted in the universal call to holiness reiterated in the Second Vatican Council's Dogmatic Constitution on the Church, Lumen Gentium. In a way that many contemporary bishops still refuse to accept, Romero was not shy about calling on the laity to embrace their baptismal vocations as full members of the church, equal in stature to any of the church's ordained ministers.

If some day they take the radio station away from us, if they close down our newspaper, if they don't let us speak, if they kill all the priests and the bishop too, and you are left, a people without priests, each one of you must be God's microphone, each one of you must be a messenger, a prophet. The church will always exist as long as there is one baptized person. And that one baptized person who is left in the world is responsible before the world for holding aloft the banner of the Lord's truth and of his divine justice.

Two years earlier, Romero preached on a similar theme, articulating with poetic inspiration the fundamental truth of the equal dignity of all the baptized. He said: "How beautiful will be the day when all the baptized understand that their work, their job, is a priestly work, that just as I celebrate Mass at this altar, so each carpenter celebrates Mass at his workbench, and each metalworker, each professional, each doctor with the scalpel, the market woman at her stand, is performing a priestly office!" 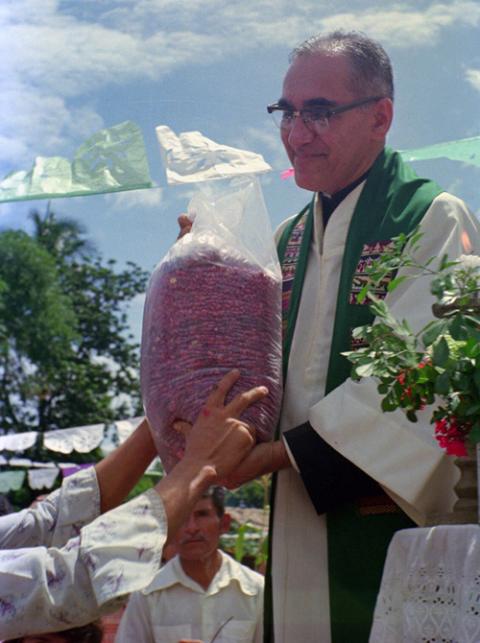 Then-Archbishop Oscar Romero receives a sack of beans from parishioners following Mass outside of a church in San Antonio Los Ranchos in Chalatenango, El Salvador, in 1979. (CNS/Octavio Duran)

The tenor of Romero's message is one that is in stark opposition to the lies and delusions of clericalism, which continues to be such an evil in the church today. He continued in that homily to address those listening to his words over the radio: "How many cabdrivers, I know, listen to this message there in their cabs; you are a priest at the wheel, my friend, if you work with honesty, consecrating that taxi of yours to God, bearing a message of peace and love to the passengers who ride in your cab."

This short statement sums up what is needed from bishops when it comes to their duty to engage in the public square. But notice how Romero begins with the caveat that he has "no ambition for power." Sadly, too many church leaders today have cozied up to those who held political power for the last four years, which dampened their ability to effectively "tell any political group what is good and what is bad." Instead, they offered weak complaints aimed at the Donald Trump administration, often without ever naming Trump, while they had no trouble attacking former President Barack Obama or current President Joe Biden directly.

Perhaps if more bishops were like Romero, unencumbered by a desire to curry political favor or influence and more connected to the people entrusted to their pastoral care, they too might be "prophetic bishops that speak to their people." Instead, at least collectively, their relevance continues to decline.

A version of this story appeared in the March 5-18, 2021 print issue under the headline: US bishops could learn from Romero.