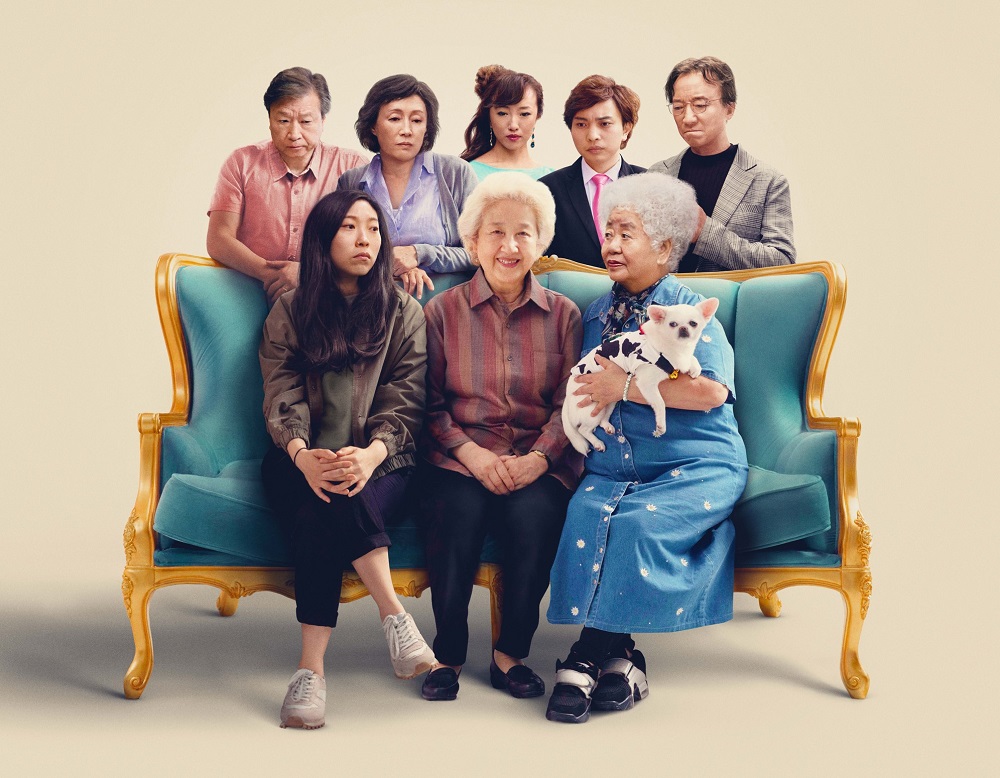 The cast of "The Farewell" (Courtesy of A24)

"Based on an actual lie."

The opening caption of Lulu Wang's autobiographical drama "The Farewell" is an enticing aperitif to the complex interpersonal dynamics of the extended family of Billi (Awkwafina), a young and struggling Chinese American writer in New York City who learns that her beloved Nai Nai, or grandmother (Zhao Shuzhen), in China has terminal cancer.

Born in China but raised in the United States, Billi is defined by cultural cross-pollination and all the contradictions that go with it. In back-and-forth shots, we see granddaughter and grandmother engaged in a good-natured overseas phone chat where they tell white lies unhesitatingly to harmonize the conversation and to shield each other from worry. Yet when Billi's family conspires to conceal the sobering medical diagnosis from Nai Nai to spare her from fear and anxiety in her remaining days, a practice not uncommon in Chinese culture, her American forthrightness kicks in, and she finds herself conflicted in the oil-and-water antipathy between the truth and the lie.

An elaborate plan ensues. The family decides to stage a bogus wedding — Ang Lee's 1993 film "The Wedding Banquet" comes to mind here — to serve as the perfect setup for a grand reunion in their Chinese hometown of Changchun, where Nai Nai lives. But Billi's parents, worried their daughter's emotional transparency would let the secret out, forbid her from flying to China. She does anyway.

The internal tension of putting up a happy face to dam paroxysms of grief becomes a real challenge for the family members, particularly for Billi, who has always enjoyed an affectionate bond with her grandmother.

Sheer gravity would pull a premise such as this into the realm of unbridled melodrama or loud slapstick (the 2009 Filipino Oscar entry "Grandpa is Dead" is a case in point), but Wang competently orchestrates the film with restraint. When Billi's cousin Haohao (Chen Han), the accommodating groom of the staged wedding, uncontrollably bursts into drunken sobs during the banquet, Wang mutes his cry and allows only the ambient music to be heard.

The film's most hilarious moment is an ironic admixture of tender melancholy and uncontrived absurdity, a sequence Wang cleverly shoots at a cemetery where the then-and-there of bygone life and afterlife remain accessible to those left behind. Nai Nai leads the solemn offering of symbolic gifts at her departed husband's grave, a Chinese custom signifying that life does not come to an end. (It is said that no one really dies in Asia.) Since the late patriarch was a chain smoker, Billi's dad, Haiyan (Tzi Ma), lights a cigarette and presents it as an offering only to be stopped by Nai Nai, who claims he had previously quit. But Haiyan's brother owns the last word: "Ma, let the man smoke, he's already dead!"

It's also noteworthy that Wang punctuates the dialogue-driven film with slick cinematography and editing. Although a somber undercurrent runs through the dramatic arc, Wang provides a counterbalance not only in moments of humor, but in the form of a visual narrative layer that is artful, dynamic and thought-provoking.

From a car window, Billi sees the hyper-modern architecture sprouting in an affluent and rapidly industrializing China, making her wonder about the point of her parents' backstory of migration in pursuit of the American dream. This comes to a boil at a heated dinner-table discussion over scrumptious servings of Chinese fare. In another sequence, we see a wide-angle, slow-mo shot of the family members walking together on the streets of Changchun, each with their own storied lives but united in their cause to protect Nai Nai.

The ensemble cast, and there are quite a few characters here, is superb across the board. Scene after scene, the actors breathe nuance and authenticity to their characters. The comedian Awkwafina, last seen as the over-the-top Peik Lin in the 2018 box-office phenomenon "Crazy Rich Asians," is thoroughly convincing as Billi, who is quite "un-Awkwafina" in her brooding, hangdog mien. Although she in reality occupies a pretty adjacent demographic and cultural zip code as the character of Billi — for one, the former YouTube rapper is known to be close to her own grandmother — Awkwafina is carving out a promising future for herself as an actor of impressive range.

The film's breakout star, however, is the Chinese actor Zhao Shuzhen. Acting in China since age 16, the charismatic 75-year-old veteran of film and television is pitch-perfect as Nai Nai. Contradiction makes for an intriguing and relatable characterization, especially when midwifed by an actor of true talent. Nai Nai is as clever as a serpent and as innocent as a dove; loving and funny in one moment and irreverent and controlling in the next. The astonishing Zhao inhabits every scene to reveal what robust humanity means and allows the viewer in. It's too early for Oscar buzz, but I hope Zhao Shuzhen registers clearly on the radar of academy voters.

"The Farewell" opens for us a window into the intriguing cultural particularities on the other shore, but in its heart are the universal themes of love, regret and forgiveness that families everywhere share.

"All family life is a 'shepherding' in mercy": Pope Francis' wisdom in Amoris Laetitia, the 2016 post-synodal exhortation on family, meaningfully resonates here. The film's story may be "based on an actual lie," but the colorful members of Billi's extended family do not go to great lengths simply to smother their Nai Nai with falsehood. They wish only to do one thing — to shepherd her in mercy.

And that, without a doubt, is based on the actual truth.

"The Farewell" is currently showing in key cities nationwide and will be released on Amazon streaming from Big Beach Films.