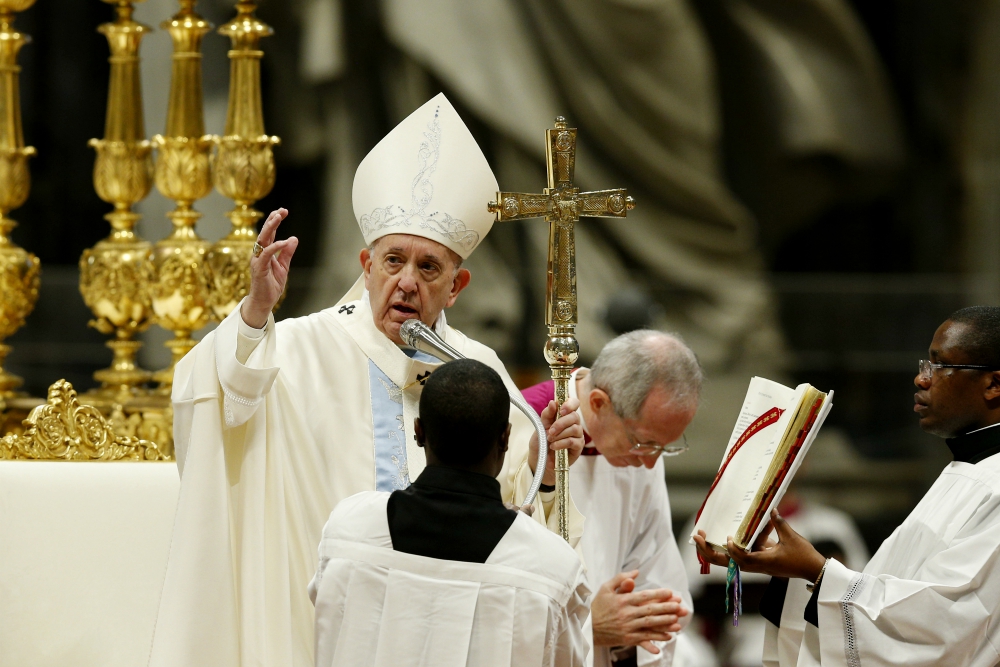 Pope Francis delivers his blessing as he celebrates Mass on the feast of Mary, Mother of God, in St. Peter’s Basilica at the Vatican Jan. 1. (CNS/Paul Haring)

Of all of the religious instruction classes that my mother took as a girl, one lesson in particular always seemed to stay with her: the day that the nun explained the church's teaching on divorce.

A girl in the class asked the sister whether it would be okay to leave her husband if he hit her.

When she got home from class, my mother told my grandparents about the lesson. Horrified, they vehemently disagreed with the nun and told her she would have to divorce any man who put his hands on her.

My mother has recounted this story many times throughout my life, and what strikes me most about it is that she, in fact, did stay with a man who hit her. He was my stepfather, and I was 4 years old when I witnessed him punch her. I was never the same again.

My mother begged me not to tell my grandparents what happened, fearing how my grandfather, an immigrant from Italy, would react. The day after the incident, my grandmother, also an Italian immigrant, was babysitting me. She became concerned when she saw that I, a typically cheerful little girl, was suddenly melancholy and withdrawn.

In our culture, emotions had no hiding place, and if you even attempted to repress your feelings, you were lovingly and unrelentingly hassled until you finally spilled. And so I told the truth.

I would learn years later that my grandmother quickly gave the news to my grandfather. One night, not long after the incident, my grandfather went over to our home when he knew my mother and I would be at church. He found my stepfather alone at the house and "straightened him out," to use an Italian-American metaphor.

Though his battering stopped, my stepfather's temper was never tamed. For seven long years, he had fits of rage almost nightly, and more than once his fist ended up inside one of our walls.

About three years into their marriage, I began preparing for my first Communion. My mother was eager to participate in the Mass. But she remembered yet another lesson from her childhood catechism class: Divorced people can't receive Communion.

My mother pleaded with the pastor of our parish to make an exception for my first Communion liturgy. "Absolutely not," he told her bluntly. "You are excommunicated."

The priest suggested she seek an annulment from her first marriage (to my father) and estimated it would cost around $3,000. We were poor and could barely put food on the table. And so, my mother was the only parent who did not receive the Eucharist at my first Communion. She wouldn't take the Eucharist again until a few years after she divorced my stepfather.

The church denied my mother access to Jesus' table because she was holding on to an abusive marriage that the church taught her she should stay in. Emotional violence begot spiritual violence.

My mother and I do not like to dwell on these memories. But I was drawn to reflect on them more deeply after I read Pope Francis' comments on violence against women, which he gave in a speech on Jan. 1, the Solemnity of Mary, Mother of God.

"By how we treat a woman's body, we can understand our level of humanity," Francis told the crowd, decrying the ways in which women are "continually offended, beaten, raped, forced into prostitution and forced to suppress the lives they carry in their wombs." 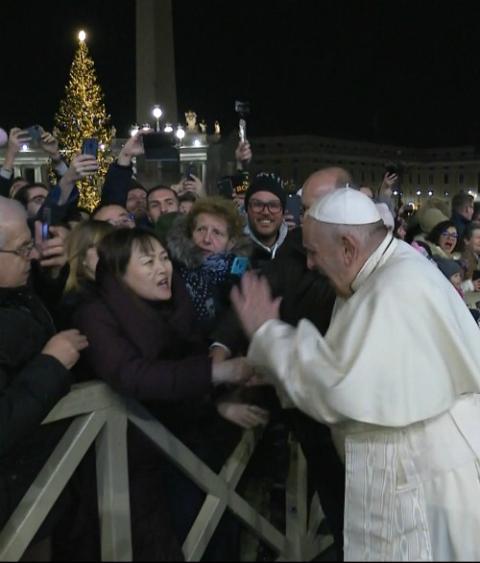 Pope Francis slaps a woman's hand after she grabbed his hand while walking to visit the Nativity scene in St. Peter's Square at the Vatican Dec. 31, 2019. (CNS/Vatican Media)

This was not the first time that Francis has spoken about violence against women, but his comments stood out in stark relief against an incident on New Year's Eve in which he angrily slapped away a woman's hands after she forcefully pulled him close to her.

The pope later apologized, admitting that even he loses patience. But what is stunning to me about the episode is that he responded to aggression with aggression. He didn't strike her the way a husband might strike a wife, but more like a father would smack an unruly daughter.

Francis did not like his body being overpowered and controlled by another person (let alone a woman) and he fought back by raising his hand to her.

And yet the pope is the leader of a church that still to this day does not clearly teach that divorce is acceptable in situations of domestic violence. Francis' apostolic exhortation Amoris Laetitia quotes Pope John Paul II in telling those in abusive marriages that "separation must be considered as a last resort, after all other reasonable attempts at reconciliation have proved vain."

And Francis still has not managed to definitively change the church's teaching that those who are divorced and remarried outside the church should be denied Communion, a spiritual violence that only exacerbates the shame and guilt heaped on those who have ended their marriages.

In his condemnation of violence against women, the pope makes continual reference to the fact that women "must be respected and honored," because a woman's body — which he calls "the noblest flesh in the world" — is capable of conceiving and giving birth.

What the pope still doesn't seem to consider is the way in which the church exerts enormous, life-or-death power over the bodies of women. Catholic doctrine on contraception and abortion has forced countless women, many of them the poorest of the poor, to give birth, even if they are rape victims and or facing high-risk pregnancies that could kill them. Where is the humanity in this treatment of a woman's body?

There are small signs of potential progress in the pope's New Year's Day remarks. At one point in the speech he suggests that women "must be fully associated with decision-making processes," an idea he has hinted at many times before, but still has yet to act on. Where is the humanity in continuing to make women powerless and voiceless in their own church simply because they are women?

While I hope that Francis will continue to speak out about violence against women, I long for the day that he will learn more about the ways in which physical, emotional and sexual violence against women is rooted in the notion that men have God-given right to rule over women — an idea he supports every time he restates the church's teaching on gender complementarity.

For all of the pope's concern about women, he still does not believe that they are equal to men. The day that teaching changes, the church can really begin confronting all forms of harm, oppression and degradation forced on women because of the dehumanizing belief that they are inferior simply on the basis of their sex.

The next time the pope wants to preach about the horrors of domestic violence or any other violence against women, he should first examine the ways in which the teachings of his own church play a role in creating or reinforcing women's suffering.

[Jamie L. Manson is books editor and an award-winning columnist at the National Catholic Reporter. Follow her on Twitter: @jamielmanson.]

Editor's note: We can send you an email alert every time Jamie Manson's column, "Grace on the Margins," is posted to NCRonline. Sign up here.