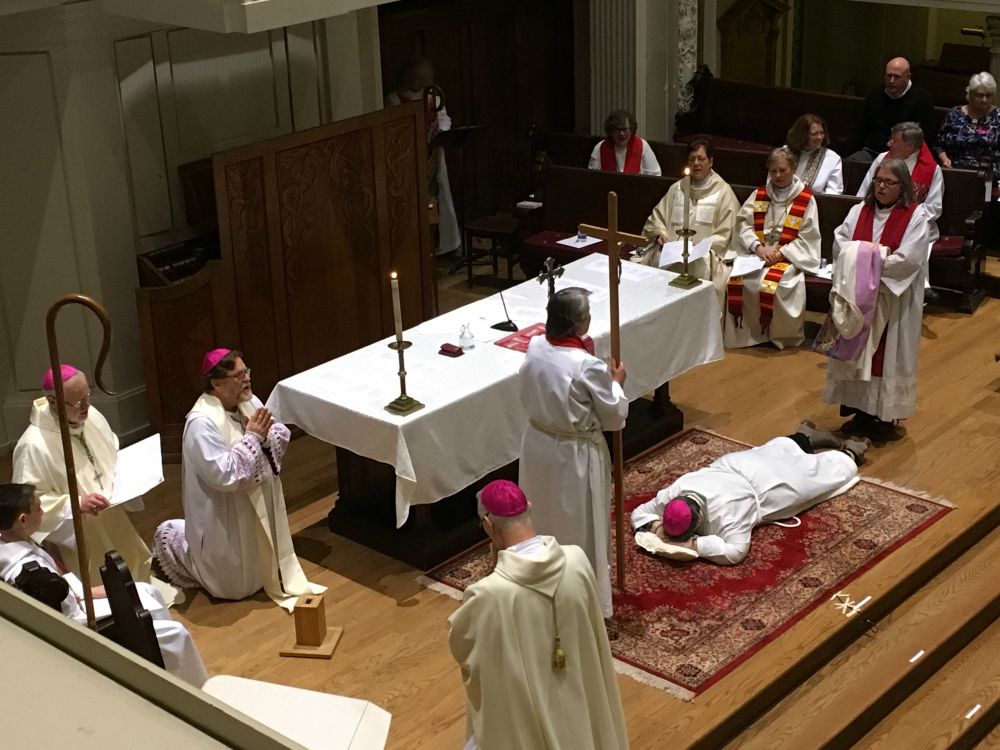 From left to right, Bishops Raphael Adams, Peter Hickman and Francis Krebs pray the litany of the saints with the community during the prayer over Denise Donato, who lies prostrate for her ordination as bishop in the Ecumenical Catholic Communion church. (NCR photo/Jamie Manson)

"Bye, Bishop Mema!" 4-year old Miles crooned as he wrapped his arms around his grandmother.

His Mema, Denise Donato, had just been ordained the first female bishop in the Ecumenical Catholic Communion (ECC). Psalm 82 speaks about wisdom coming "from out of the mouths of babes." One day Miles will learn that his sweet farewell was also a revolutionary statement.

Yet, for all of its radical elements, Donato's ordination, which took place on Feb. 9, looked and felt a lot like a typical ordination of a Roman Catholic bishop. The order of the liturgy, the prayers, and the symbols were remarkably traditional.

Like all bishops, Donato was offered sacramentals to mark to her nascent episcopacy: a crozier carved by her husband, Phil; a pectoral cross from her parents; a ring that was a gift from Mary Magdalene Church, the community that she serves as a priest; a mitre handcrafted by the same women who made her vestments for her priestly ordination 15 years ago.

Though three male bishops led the ordination rites, the Eucharistic liturgy was celebrated with eight women bishops and priests, all of whom had walked with Donato on the path that led her to this moment.

Donato's elevation to bishop is the latest milestone in what has been a quietly prophetic life. 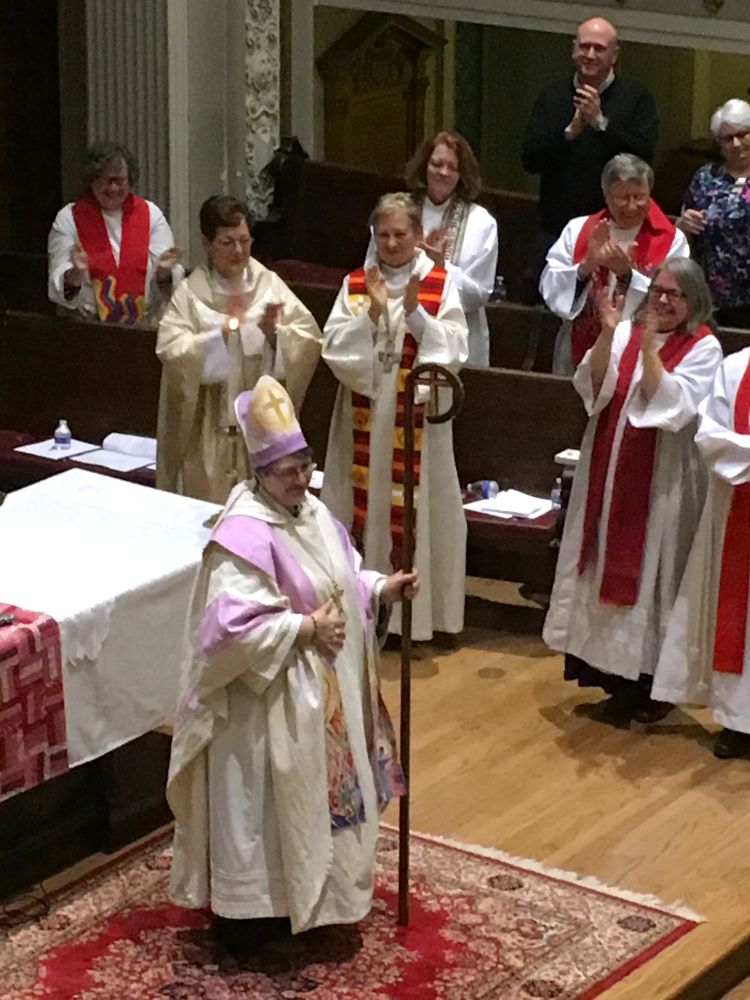 She began her ministry in the mid-1990s when she was hired as family minister at Corpus Christi Church in Rochester. A few years into her work, the parish received nationwide attention because of a dispute it was having with the Rochester Diocese. Several parishioners had complained to the bishop about Associate Pastor Mary Ramerman's role in assisting the parish's pastor, Jim Callan, during the consecration of the Eucharist. (Ramerman would stand beside Callan at the altar and raise the chalice during the words of institution.)

In 1998, the diocese removed Callan from the parish and fired Ramerman, Donato and several other staff members. Within months, the community found the gumption to re-establish itself as Spiritus Christi Church. In time, they discerned that Ramerman and Donato should be ordained as priests.

Spiritus Christi's search for a bishop who would ordain Ramerman led them to Peter Hickman, a bishop in the Old Catholic Church serving St. Matthew's community in Orange County, California.

Hickman agreed and, in early 2001, more than 3,000 people attended Ramerman's ordination at the Eastman Theater in Rochester.

"Mary's ordination was this great outpouring of the spirit," Hickman recalls. "We were having a tangible experience of the sacred."

"They saw the release of the energy of the power of the Holy Spirit and they saw that something was lit in Rochester," Hickman says. "They wanted to put some organization behind it."

With the help of donations and a paid executive director named Allison Sansone, the ECC was formed.

"It was birthed through the efforts and dreams and hopes of so many countless individuals," says Hickman. "All I really had to do was show up."

Donato herself began to gravitate toward the ECC after Hickman ordained Ramerman a priest.

"We met for lunch, and Peter said to me, 'You've been affirmed by your community. It's very clear to me that I see God's call in your life. Now you have an open door, will you go through it?' " Donato remembers.

Hickman ordained Donato to the priesthood in February 2003. Six months later, the ECC had its first formal convocation. They will celebrate their 15th anniversary at their Synod in September.

Though Hickman no longer identifies as an Old Catholic, he does see the ECC as rooted in that tradition. A former Baptist minister who later converted to Roman Catholicism, Hickman says he shifted to the Old Catholic Church because of his reservations about papal infallibility.

For him, the ECC takes the reforms of the Old Catholic tradition to a new place, ordaining women and welcoming clergy who are openly LGBT.

It was this kind of prophetic welcome that attracted the ECC's current presiding bishop, Frank Krebs, to the movement. Krebs left the Catholic priesthood in the 1980s out of a desire to live life as an openly gay man.

"I came to be a part of the ECC because it lets us be Catholic again," says Krebs. "I get to minister to people again." 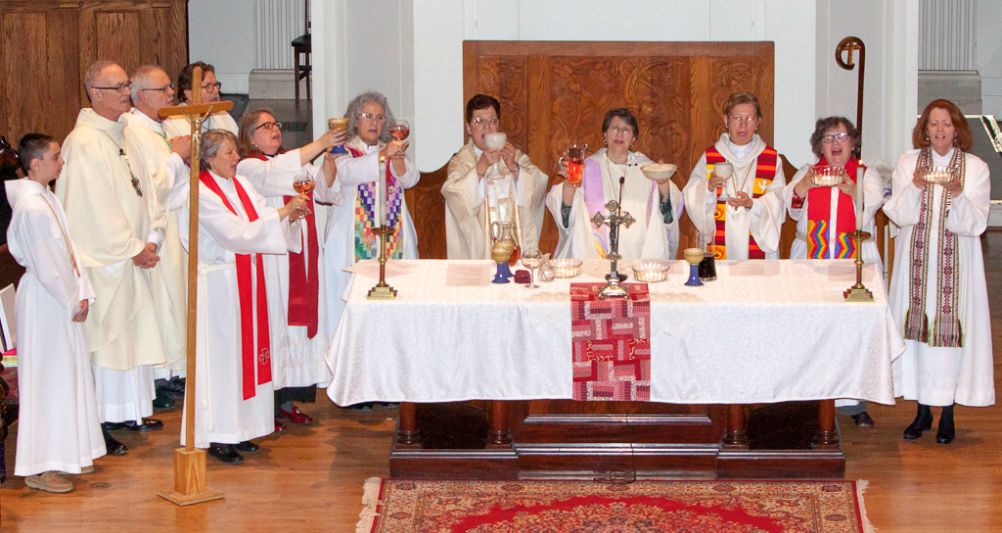 Eight women bishops and priests led the celebration of the Eucharist during the ordination liturgy. (John DeMaria)

Though Krebs admires those Catholics who are struggling for change within the institutional church, he sees the role of the ECC as designing, planning and building a new model of the church.

"We're reformers in the sense that we are reforming the tradition, but we're not fighters," says Krebs. "We have freedom from the institution, so we're using it to move the church forward."

Krebs believes the Old Catholic tradition is a better reflection of the early church, particularly because it allows the people to choose their bishops.

"People know how to choose their own leaders," says Krebs. "We chose Denise because she has incredible gifts, and everyone can see it. We gravitated toward her naturally."

Both Krebs and Hickman were among the bishops, priests and lay people who shared in conferring Donato's ordination rites. Callan and Ramerman were also among the clergy in the sanctuary.

"We're living the church we want to see in the world."

Donato says that the church still feels like home to her, even though she no longer serves Spiritus Christi as a priest. In 2009, she took a leap of faith and founded a new community called Mary Magdalene Church.

That church has grown to 150 members and, in 2015, the community was able to purchase a former Lutheran church property in East Rochester. Though it is a relatively small space, the church has become a community center, hosting teen groups, theater troupes, Alcoholics Anonymous and Narcotics Anonymous meetings, homeless outreach and adult education programs, in addition to its Sunday mass and other liturgies.

"The whole building is alive," says Donato. "You can feel it."

As a bishop, Donato will help to serve the ECC's 51 parishes in the United States. Those parishes comprise the ECC's two dioceses, one in mid-America and the other in California. Each year, several new communities join the ECC, and in the next few years they hope to form one or two more dioceses. Currently, about 95 priests (28 of whom are women) serve ECC communities, as well as 11 deacons and seven bishops.

While most ECC communities have between 20 and 100 members, several of the California-based parishes boast hundreds of members. The largest ECC parishes are its Hispanic communities, led by Bishop Armando Leyva. There are currently more Hispanic members of the ECC than there are non-Hispanic members.

Donato says one of the focuses of her ministry will be to reach out the Roman Catholic Women Priests community, many of whom she has journeyed with for over 20 years. Their presence was felt at Donato's episcopal ordination, with Bishops Christine Mayr-Lumetzberger and Andrea Johnson sitting among the ECC bishops in the sanctuary and praying over Donato.

Donato believes that the many incarnations of the Catholic reform movement are a sign that the Holy Spirit is at work.

"When the Spirit breaks things open, there is not one trajectory, there are many," she says. "Like the apostles, we went out and scattered, and our communities all look different."

Donato hopes to work with other women priests to bridge the gaps. "We will have different expressions, but in the end we are all one."

She also has a vision of reaching out to Catholics much more broadly, especially women who have feel called to ordained ministry.

"We've got to help women who do not know about the ECC or the [Roman Catholic Women Priests], especially those who are in seminaries," says Donato. "There are women who, like me, say, 'I'm Catholic; it's part of me. I don't feel called outside of it. But just as deep in me is the call to ordination.' "

As radical as Donato's life might seem from the outside, she insists that she is not a reformer.

"I had to reflect on the question of whether I was called to reform the church or called to minister to the people," says Donato.

Like many members of the ECC, Donato believes that if you choose to do ministry first, the ministry will produce its own reform.

"We're living the church we want to see in the world."