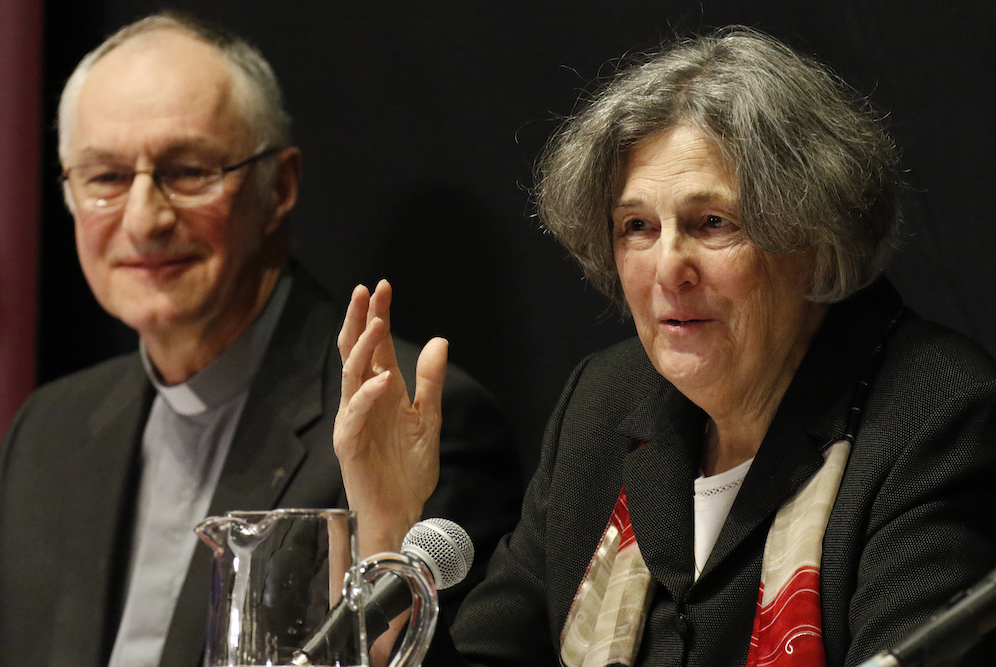 Catholic scholar and author Phyllis Zagano speaks during a symposium on the history and future of women deacons Jan. 15 at Fordham University's Lincoln Center campus in New York City. Looking on is Jesuit Fr. Bernard Pottier, a member of the Vatican's International Theological Commission. (CNS/Gregory A. Shemitz)

Last week, two members of the Pontifical Commission for the Study of the Diaconate of Women spoke publicly for the first time since their appointment.

The commission members were Phyllis Zagano, one of the world's leading experts on the history of women deacons (and an NCR columnist and a friend of mine), and Jesuit Fr. Bernard Pottier, a scholar in the early church, philosophy and psychology and a member of the Vatican's International Theological Commission.

As they offered their reflections during a panel discussion at Fordham University, several questions were answered: the commission's report is complete; it is on Pope Francis' desk; no one knows how, or if, or when the report will influence the pope's decision on whether the Roman Catholic Church should restore the diaconate for women.

But even with these new revelations, I came away from the event with even more questions, and some of them rather troubling. Though much was said that evening, just as telling was what was not said and what, apparently, could not be said.

As NCR reported last week, at the conclusion of the question-and-answer period, an audience member, Karen Gargamelli-McCreight, expressed her frustration from the back of the room that none of the pre-selected questions dealt with women's ordination to the priesthood. (Full disclosure, Karen is also a friend of mine.)

Karen asked the panel to "look me in the eye and tell me you do not believe women are called to be priests." The panelists simply responded that the ordination of women as priests was not the topic that they were there to discuss.

The avoidance of the question was no surprise since throughout the course of the two-hour event, the panelists took pains to make it clear that they were in no way suggesting that women should be ordained priests.

And every time I heard a panelist distance herself or himself from the issue, I could not help but wonder, is this what it is going to be like if women do become deacons? Will every woman deacon have to promise that she will never suggest that women should be priests? Will every woman deacon be expected to disassociate herself from the issue like this?

And if that is the case, doesn't it mean that women deacons who actually do support women priests will have to self-censor and keep their convictions hidden, as every male bishop, priest and deacon who secretly supports women priests is expected to do today? And if these women deacons don't keep silent, won't they face the same discipline, or coercions to recant, or threats of expulsion that male advocates for women priests do?

Pope Francis has repeatedly said that the issue of women priests has been decided and the door is closed. Why wouldn't women deacons be compelled to parrot that response or face the same consequences?

Will women deacons be put in the painful situation of having to silence other women who dare to press the issue of women priests?

I can easily envision a situation in which women deacons, having been given a little bit more authority in the church, are then instructed not to complain or push for other roles. Wouldn't these women be told to be grateful for what they've been given and not upset their bishops?

I cannot help but fear that, rather than allowing women to grow into greater roles in their church, this issue will end up dividing and conquering them.

One concern that did not arise during the panel presentation was the very real possibility that an alternative form of the diaconate could be formed for women. In her recent column, titled "It's not about women priests," Zagano described the typical duties of a women deacon:

Did any of the women deacons of the past preach or witness a wedding ceremony, as male deacons are permitted to do? If they didn't, what would stop Francis from making a sub-diaconate or a new order of deaconess for women? That is, a role that lets women do service work, but without the fullness of authority that male deacons enjoy.

Giving women a "special" role like this would certainly help Francis pacify women while also avoiding the melee that would undoubtedly arise if women were actually granted an ordination equal to that of men. The truth is, that kind of equality really doesn't jibe with Francis' firm belief in gender complementarity anyway.

One of the headlines on the coverage of the women deacons panel declared that "ordaining women deacons is 'about ministry,' not 'power.' " This is a common refrain of advocates for women deacons. And every time it is said, it seems aimed at soothing ordained men who cannot bear the idea of a women having a role equal to theirs. But all it really does is reinforce the corrosive notion that women have no desire or natural ability to lead or have authority in their church. And that simply isn't true.

It also gives the ugly impression that women who are called to be priests are somehow power-hungry and status-seeking — characterizations that are never applied to men who pursue the priesthood.

The papal commission has done a fine job of collecting facts to back up its claim that women did once serve as deacons. But if we relied solely on historical precedent to determine how we are to grow as a people and as a church, where would we be now? Would the Second Vatican Council have even been called?

When Gargamelli-McCreight asked the panel to tell her what they really think about women priests, I believe what she was trying to say was: Don't just give us the facts, give us the truth.

The truth is women should be priests, and we should be unafraid to say so, because allowing women to be priests is simply the just and right thing to do.

The truth is a church that claims to have such a radical commitment human rights and human dignity ought to understand that it has a profoundly influential role in telling the world that women are fully human and truly equal and completely entitled to the rights, roles and responsibilities given to men both in society and in the church.

The truth is a church that claims that God is everywhere and that God works through all of creation should not stand in the way of God's longing to work through the gifts, strengths and power of women as priests.

I appreciate and respect that the commission members believe in good faith that they are taking an incremental approach to getting women inclusion in the church.

But this week we were reminded of the words and witness of Dr. Martin Luther King Jr. who, in time, abandoned the incremental approach to change.

In his "Letter from Birmingham City Jail," he famously criticized the white Christian moderate who "paternalistically believes he can set the timetable for another [person's] freedom" by telling black Americans "to wait for a 'more convenient season.' "

Later in the letter, with language that sounds remarkably like good Catholic theology, King writes:

Human progress never rolls in on wheels of inevitability; it comes through the tireless efforts and persistent work of [people] willing to be co-workers with God, and without this hard work time itself becomes an ally of the forces of social stagnation. We must use time creatively, and forever realize that the time is always ripe to do right.

[Jamie Manson is a columnist and the books editor at National Catholic Reporter.]

A version of this story appeared in the Feb 22-March 7, 2019 print issue under the headline: What cannot be said.