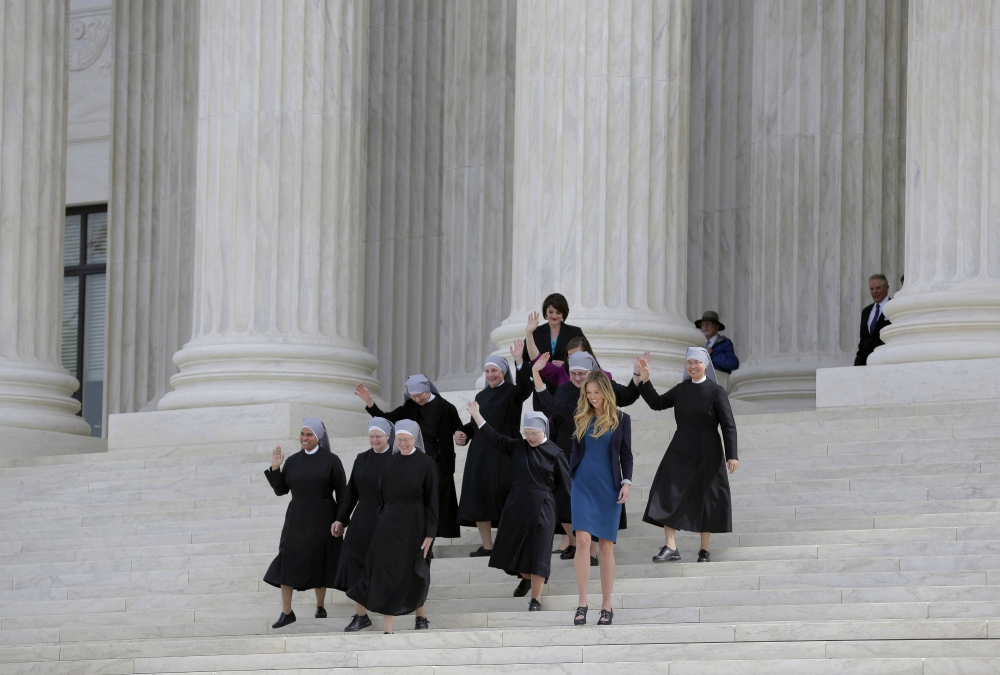 Members of the Little Sisters of the Poor and other women walk down the steps of the U.S. Supreme Court in Washington in March 2016 after attending oral arguments in the Zubik v. Burwell contraceptive mandate case. (CNS/Reuters/Joshua Roberts)

On July 8, for the third time in five years, the Little Sisters of the Poor emerged victorious from their latest religious liberty fight in the Supreme Court.

Though COVID-19 kept them away from the courtroom to witness their latest case, Little Sisters of the Poor Sts. Peter and Paul Home v. Pennsylvania, one could imagine the small collection of older women in gray habits spilling out onto the steps of the Supreme Court smiling and waving, as they have after similar wins.

The Little Sisters of the Poor, we have learned, are neither little, nor poor. They are an avatar for the wealthy and powerful Becket Fund for Religious Liberty, a well-oiled legal organization backed by the Knights of Columbus and other wealthy Catholic donors. The Becket Fund provided counsel on all three of the Sisters' cases. They also won the other July 8 SCOTUS case, Our Lady of Guadalupe v. Morrissey-Berru, which gives religious employers sweeping immunity from nondiscrimination laws.

For more than 130 years, the Little Sisters' primary mission has been serving poor, elderly populations. But when the Obama administration proposed that free access to contraception was an essential part of preventative health care, the sisters discovered a new charism as warriors for a right-wing interpretation of religious freedom.

If you don't recall how we got to this place, here's a recap. When the Affordable Care Act became law in 2010, employers were obligated to provide no-cost contraceptive coverage as part of their insurance benefits. Religious leaders — namely Catholic bishops — threw a fit, claiming that the mandate violated their conscience. A narrow exemption was then created to protect churches and other houses of worship that banned contraception, but it did not include schools, hospitals, charities and other organizations owned by religious groups.

That wasn't good enough for the bishops, so the Obama administration revised the exemption to include religious nonprofits, allowing them to opt out of providing coverage through a process called "self-certification," which meant giving written notice of their objection. In these cases, the government or the insurer would cover the cost.

Then, in 2014, the Supreme Court made a stunning decision in favor of Hobby Lobby and other for-profit employers who were also refusing to provide contraception coverage for their workers. The court determined that the federal Religious Freedom Restoration Act permitted them to opt out. It was more important to protect the religious freedom of corporations, the court's majority argued, than it was to protect the rights of workers who were guaranteed contraceptive care under federal law.

In 2017, President Donald Trump signed an executive order that broadened the kinds of employers permitted to opt out of contraception coverage for religious or "moral" reasons. Any nonprofit company or for-profit company (both publicly traded and not publicly traded) was allowed to defy the contraceptive mandate on the basis of "sincerely held moral convictions."

Pennsylvania and several other states then sued Trump, claiming that the increased costs of the exemption were becoming too burdensome. This is the dispute that resulted in SCOTUS's July 8 decision in Little Sisters of the Poor Sts. Peter and Paul Home v. Pennsylvania (which was consolidated with Trump v. Pennsylvania).

There are two ironies in this latest case. First, the Little Sisters were not even an original party in the lawsuit. A federal appeals court permitted them to "intervene" in the case, which gave them "many of the same rights to litigate the case as an actual party," writes journalist and legal expert Ian Millhiser.

Second, the Little Sisters already had an exemption. They have been protected since 2012 when the Obama administration revised "conscience protections" to allow religious charities, hospitals and schools to shift the cost of contraception coverage onto insurers.

So why were the sisters involved? Well, they didn't like the "self-certification" process that was required to get them out of contraception coverage. They agreed with the Trump administration's claim that the process of giving written notice of their objection " 'makes them complicit in providing [that] coverage,' even if the coverage is actually paid for by other parties."

So, just one piece of paper was too burdensome for the Sisters because it forced them to collude in the evils of contraception access. And they wanted all religious objectors to have an absolute right to refuse to participate in the process in any way. The sisters claim that the treatments covered by the contraceptive mandate, like birth control pills and IUDs, induce abortions. As I wrote in 2012, that allegation has been debunked, including by the Catholic Health Association's journal itself.

Nevertheless, the Little Sisters of the Poor won again on July 8 and continue to be the perfect front for an extreme, right-wing religious battle being waged in the courts. In yet another irony, this latest victory will cause undue burden and possible harm to workers, especially the poorest.

Consider this: While the Sisters do outstanding work among elderly, they themselves are quite elderly, too. This suggests that, like most nursing homes, the primary caretakers in their facilities are female nursing assistants. Nationwide, the average salary for nurses' aides and orderlies, according to Bureau of Labor Statistics, is $14.25 per hour or $29,640 per year. In Pennsylvania, the average hourly wage is for a nursing assistant is $12.89, and a housekeeper's wage can go as low as $10.33, according to Indeed.

The very women who are breaking their backs in the Little Sisters facilities were part of the population that the Obama administration was seeking to protect when it passed the Affordable Care Act. Justice Ruth Bader Ginsburg reminded us of this reality in her dissent, saying that low income women will be forced "to hunt for other government programs that might cover them" or pay out of pocket, "which is exactly what Congress didn't want to happen."

The "glaring feature" of what Trump administration has done, Ginsburg added, "is to toss to the winds entirely Congress's instruction that women need and shall have seamless, no-cost, comprehensive coverage."

Between 70,500 and 126,500 Americans will immediately lose access to no-cost contraceptive services because of SCOTUS's ruling, Ginsburg also noted. And millions more stand to lose it.

This ruling feels especially cruel during the coronavirus pandemic when women working in elderly nursing facilities are among the most vulnerable to getting sick and dying.

Trump did this, of course, to appease right-wing religious leaders who are still trying desperately to control women's fertility and women's agency over their bodies and their health. What is most frustrating is that religious freedom is supposed to guarantee the right to be free from the burdens of someone else's religion.

The majority of justices, unfortunately, do not see it that way. At least five of them are very conservative, highly privileged Christian men who have made it clear that a right-wing organization's claim to religious liberty can trump any right to health care mandated by federal law.

This ruling will have a profound and lasting impact that will not change with a new administration or a new session of Congress. Time will tell what other laws will be in jeopardy as a result of this precedent. With Ginsburg's announcement that her cancer has returned, it's an alarming reminder of how consequential November's election will be.