Pro-life supporters pray during a protest Jan. 18, 2018, outside a Planned Parenthood facility in Washington. Fr. Frank Pavone, national director of Priests for Life, led the group of about 200 in prayer. (CNS photo/Lisa Johnston, St. Louis Review)

Near the end of the new FX documentary "AKA Jane Roe," there is a scene from the funeral of Norma McCorvey, the woman who was the lead plaintiff in the landmark Roe v. Wade case that legalized abortion nationwide.

Three clergymen process up the aisle to co-preside at the service: Fr. Frank Pavone, Rev. Rob Schenck and Rev. Flip Benham. For years this triumvirate attached themselves to McCorvey as she converted to and later became a chief evangelist for the anti-abortion movement. What none of them know at the time of her funeral is, not long before she died, she made a "deathbed confession" that her rebirth as an anti-abortion activist was a lie. 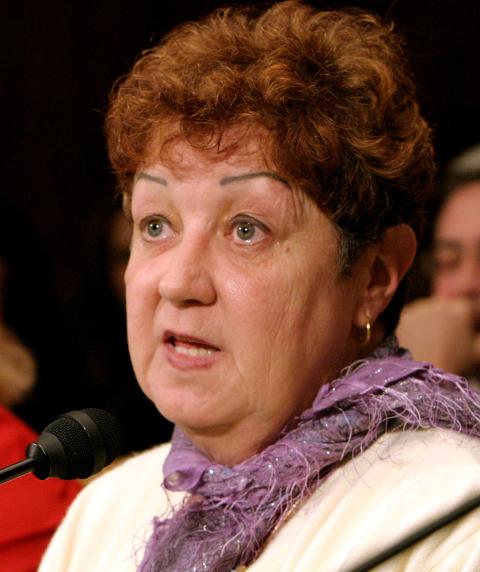 Norma McCorvey, the anonymous plaintiff known as Jane Roe in the Supreme Court's landmark 1973 Roe vs. Wade ruling legalizing abortion in the United States, died Feb. 18, 2017, at age 69. She is pictured in a 2005 photo. (CNS photo/Reuters/Shaun Heasley)

McCorvey's revelation, told on camera to the "AKA" filmmakers, drives the film's entire narrative. Details from her troubled youth help explain her stunning shift from vociferously pro-choice in 1973 (the year Roe was decided) to radically anti-abortion in 1995, after Benham baptized her in a backyard pool.

After being abused, betrayed and abandoned by her parents, she was a child bride and battered by her husband, who abandoned her, too. In her early 20s, McCorvey got pregnant while living as a drug addict on the streets in Texas. After many attempts to obtain a legal abortion, she found a back-alley provider in a filthy, roach-infested apartment in a rundown part of Dallas. She had heard stories of women bleeding to death in places like that and decided to flee.

McCorvey turned to an attorney to arrange an adoption. He told her about two young Texas lawyers, Sarah Weddington and Linda Coffee, who were seeking a plaintiff to try to overturn Texas's abortion ban. McCorvey fit the exact profile they were looking for: a poor, pregnant woman with no resources to travel to a state where abortion was already legal.

In 1969, McCorvey signed a one-page affidavit that made her Jane Roe. Of course, she never got the abortion she wanted because the Supreme Court didn't make a decision until 1973. She had no choice but to put up her baby for adoption right after giving birth.

Four days after the ruling, Jane Roe came out publicly as Norma McCorvey and became a national spokesperson for the pro-choice movement. But they never really embraced her, preferring celebrity spokespeople instead.

McCorvey did become a target for the anti-abortion movement, particularly Operation Rescue, its most radical faction that regularly staged massive demonstrations at clinics, blocking access and harassing women and patients. Benham and Schenck, its two most visible leaders, used extreme tactics. The documentary shows Schenck running up and down a picket line cradling fetal remains in his hands.

Benham intentionally moved one of Operation Rescue's offices right next to an abortion clinic where McCorvey worked. He used McCorvey's smoke breaks to form a relationship with her and groom her to be part of his movement. By July 1995, he had McCorvey "surrendering her life to Christ" and fully enlisting in his anti-abortion army.

"Sure Norma was a target," Schenck admits with candor in the documentary. "She was less defended, more needy. That was easy to detect especially for those of us who were clergy who were used to those kinds of personalities. We saw that her greatest weaknesses could be exploited."

But McCorvey wasn't done reinventing herself. In 1998, she converted to the Catholicism under the spiritual direction of Fr. Frank Pavone, leader of the extremist anti-abortion organization Priests for Life.

Though Pavone is only mentioned briefly, Benham and Schenck contribute heavily to the documentary. Benham is as fired up as ever, boasting about the time he and McCorvey burned a copy of the Roe judgement, a gay pride flag and a copy of the Quran on an outdoor grill in front of a crowd.

Schenck still identifies as an Evangelical pastor, but recently had what he calls a conversion from his former life as an anti-abortion extremist. He told NPR's Terry Gross it was sparked by his powerful encounter with the family member of a doctor murdered by anti-abortion activists. He realized his inflammatory rhetoric made him culpable in his death and the deaths of two other doctors.

Both Benham and Schenck agree that McCorvey was a trophy for the movement, which suggests how much of this fight might be driven by a deeply male need to win.

But McCorvey isn't naive. "I was the big fish," she tells the filmmakers.

That feeling of importance lured in McCorvey, who was ultimately more "pro-Norma" than pro-life or pro-choice. And how couldn't she be after so much abuse, abandonment and poverty? Radical anti-abortionists gave her what she craved: attention, a sense of value and purpose, and enormous sums of money.

The documentary suggests that over several years McCorvey earned more than $400,000 in speaking fees, book deals and income from the payroll of Operation Rescue.

"There was a worry that if she wasn't paid enough, she would go back to the other side," Schenck admits in the film.

But her constant demands for money seemed to wear on Benham and Pavone. In a 2013 article in Vanity Fair, Benham complained, "She just fishes for money."

Pavone told the magazine that McCorvey got "a few hundred dollars here and there" from his organization, and that there was still a "big temptation on the pro-life side to view this person as a trophy."

On his Twitter account last week, Pavone repudiated the documentary as deceptive and misguided, suggesting he knew McCorvey better than most.

But if you make someone a pawn in a politically-charged crusade, do you really ever see her for who she is, or only for who you need her to be?

Still in the thick of his anti-abortion crusade, Pavone does not possess the level of honesty and self-reflection that Schenck displays. When the filmmakers show him McCorvey's confession (after her death), Schenck is stunned, but not surprised:

"I knew what we were doing and there were times I was sure she knew. And I wondered, 'Is she playing us?' What I didn't have the guts to say was, 'Because I know damned well we were playing her.'"

These men were exploiting McCorvey's desperate need for money and attention, and McCorvey was exploiting their desperate desires to win and to control female fertility. Yet the ones who actually get swindled, the ones who really lose, are women, who are denied the freedom to make choices about their lives, their health and their families.

But McCorvey's position as a powerbroker is an illusion. She was utterly dependent on these men, dominated by them even at her funeral. "AKA Jane Roe" is a reminder that abortion legislation has never really been in the hands of women. The majority of politicians and religious crusaders who obstruct a women's right to choose are men. And their holy war is based on doctrine created by the all-male clergy of the Catholic Church who, in theory, are forbidden from sexual relationships with women.

As fascinating as McCorvey's story is, Schenck is perhaps the most compelling voice in the film. He now believes that abortion is an ethical issue that should be resolved by individual conscience, not legislation. He tells the filmmakers that he fears Roe may be overturned and, if so, "the result of that would be chaos and pain. And to impose that kind of crisis upon a woman is unthinkable."

"Sure Norma was a target. She was less defended, more needy. That was easy to detect especially for those of us who were clergy who were used to those kinds of personalities. We saw that her greatest weaknesses could be exploited."

As one of the 48% of U.S. Catholics who thinks that abortion should be legal in all or most cases, I wish that pro-lifers could listen to Schenck, particularly those who claim to be in the sensible wing of the movement — those who say they want "middle ground" but who, ultimately, are opposed to a women's right to choose.

In that interview with Terry Gross, Schenck had this to say about his past and the present:

"I live with regret. … I remember women — some of them quite young — being very distraught, very frightened, some very angry. Over time, I became very callous to that.

"This is not a question for politicians. When your end goal is a political one, you will, without exception, exploit the pain and the suffering and the agony of those who face the issue in their daily reality, in their real life."

"AKA Jane Roe" portrays the mess that religious extremism has made of a legal battle that should never have been infringed upon by religious groups in the first place. Even more importantly, it shows how and why women's needs, rights and realities are always the first things that get lost in the fight.