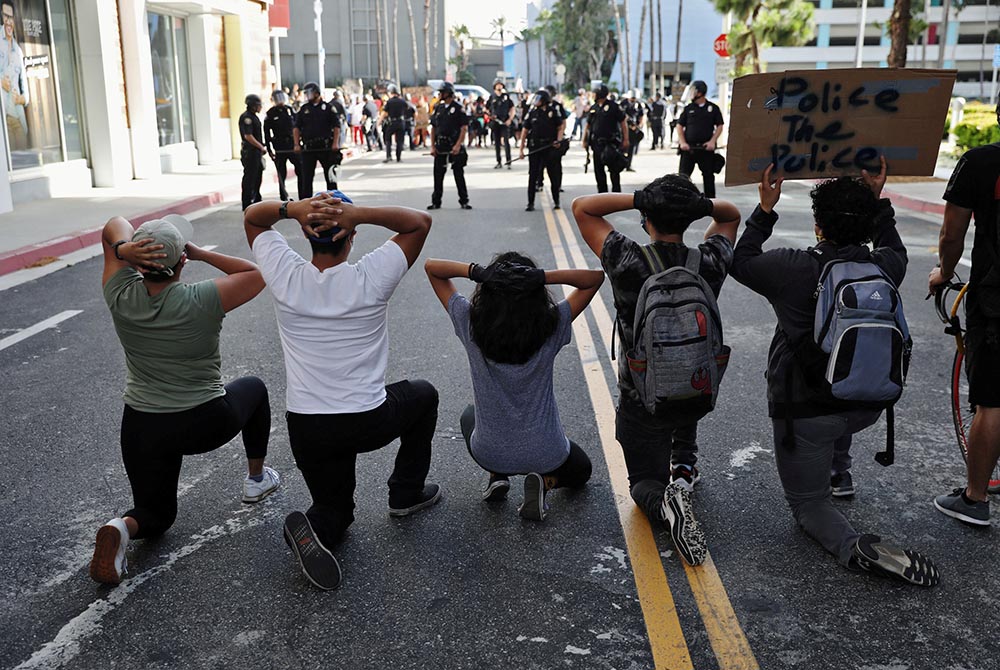 Protesters in Long Beach, California, demonstrate May 31. Demonstrations continue after a white police officer in Minneapolis was caught on a bystander's video May 25 pressing his knee into the neck of George Floyd, an African American, who later died. (CNS/Patrick T. Fallon, Reuters)

Like many progressive Catholics who try to practice anti-racism, I was disappointed by some of responses that came from Catholics leaders — bishops and communities of women religious alike — in the wake of the murder of George Floyd on a street in Minneapolis.

I share Fr. Bryan Massingale's frustration at the "pathetic, anemic Catholic response." Like the Catholic reform group Call to Action, I am angry that Catholic leaders refused to say Black Lives Matter, and that many instead used its cowardly counterpart All Lives Matter.

In the most charitable read of the situation, perhaps the problem is that Catholic leaders don't realize what Black Lives Matter means.

The phrase, of course, has been a lightning rod since it was coined after George Zimmerman was acquitted of murdering Trayvon Martin in 2013. Zimmerman gunned down the unarmed teenager and then claimed Florida's "stand your ground" law as a defense.

In a 2015 speech to Call to Action, which I covered for NCR, theologian Kelly Brown Douglas traced the roots of "stand your ground" laws to slavery and the ideology of "American exceptionalism," which privileges white lives over all others.

"Just because chattel slavery no longer exists in America ... does not mean that the racial constructs that slavery produced do not continue to exist," Douglas said. "The black body as chattel is the specter from slavery that has the greatest impact on black people's current social, cultural realities."

The ongoing drive to criminalize the entire black population is a sign of white America's enduring belief that "the black body is not meant to be free," she said.

In this speech and in her book Stand Your Ground: Black Bodies and the Justice of God, Kelly explained that the dehumanization, injustices and degradations that people of color endure are based on one basic notion: White people are more important and valuable than people of color. That is, white lives not only matter, they matter more.

In his NCR essay yesterday, Fr. Bryan Massingale asked white people to "sit in the discomfort" of the hard truth of their own racism. "Let it become agonizing. Let it move you to tears, to anger, to guilt, to shame, to embarrassment," he said.

When I sit with it, one of the ugliest aspects of my own racism emerges when I watch the news and see that something awful has happened to a white person or family: a catastrophic car crash, a fire, a kidnapping, a murder. I react more strongly. I somehow feel it is more of a tragedy when it happens to white people. Perhaps, it's because I see myself, my image and my life reflected in the victims. But it's also because it has been so ingrained in me that white people matter more, that somehow white people don't "deserve" this.

Saying Black Lives Matter is no different from Catholics saying we have a preferential option for the poor. That is, God dwells with those who suffer most and we must take better care of them than we take of ourselves.

This is one reason why it is so crucial to explicitly say "Black Lives Matter" without any qualification, and particularly without the qualification that "All Lives Matter." Because white people naturally think and act with the deep-seated belief that white people matter more and that black people matter less. And, of course, "all lives" cannot matter if indeed black lives don't matter first.

Saying Black Lives Matter is no different from Catholics saying we have a preferential option for the poor. That is, God dwells with those who suffer most and we must take better care of them than we take of ourselves. If we can go to the border and care for brutalized immigrants, we must go to the protest line and fight for justice for black people. Both communities are suffering from the same entrenched, racialized myth that people of color are not fully human.

There are ways that the struggles of some white people intersect with the sufferings of people of color. For example, being a queer woman gives me some insight into what it is to live in fear. My gender makes me wary of all men at all times, especially when I am alone, and my sexuality makes me afraid to show a public display of affection in many parts of this country and most parts of the world.

But that pales in comparison to how much I benefit from my white skin. I'm never afraid when a cop car passes by me; if I get pulled over, not only am I unafraid, I even have some confidence I can talk my way out of it. My whiteness gives me the presumption of innocence, the benefit of the doubt and preferential treatment.

Being a queer woman also helps me understand what it means to be disappointed by the cowardice of religious leaders when it comes to issues of justice and inclusion. Bishops, priests and even some women religious communicate to me and my communities that we simply are not worth the risk and effort. I know what it is to have my church treat me as subhuman. I know what it is to be told that because of my gender and sexual orientation, I do not deserve equality or justice or access to sacraments in my own church.

Because issues of women's equality and LGBTQ justice affect white people, we can more easily recognize the injustice. Because I am white, I still have the chance be heard as the church closes its doors in my face. I even get a platform in a national Catholic newspaper. I get these opportunities because white people are in power, and they think that injustices that happen to white people matter more. Just like I more readily identify with white crime victims on the nightly news, they identify with me.

As a white queer woman I am what Rachel Ricketts calls an "oppressed oppressor." My own experiences of discrimination break open my heart so that I can see oppression and understand what it feels like, but I'm still a white person and, as such, I carry and carry on the legacy of white supremacy that has been ingrained in me all my life.

In the past few years, we have seen many justified uprisings to the unjust murder of black bodies. But the response to the killing of George Floyd feels different. These protests are affecting white people beyond the U.S. and have moved into Canada, the U.K. and Europe. According to The Washington Post, on one of the remaining strips of the Berlin Wall, a new mural with George Floyd's face appeared over the weekend. "I can't breathe," it read.

Has the worldwide rise of nationalistic, white supremacist leaders finally unleashed the peoples' backlash? Has the coronavirus' looming threat to take our breath away given us more compassion for a man who was slowly suffocated before our eyes under the knee of a man who does not think black bodies should be free? Are white Christians finally able to see the face of the crucified Christ in a black man who dies a slow, painful death, crying out for his mother the way Jesus cried out for his father?

Perhaps. But even white people with the best of intentions, people who actively and intentionally work at being at anti-racist, still hold prejudices within ourselves. Being anti-racist doesn't mean being free of racism, it means committing to "fight racism wherever you find it, including in yourself," to quote an insightful tweet by Ijeoma Oluo.

It's hard, uncomfortable work and it's a lifelong road. The weeks and months ahead with tell whether this moment was a flash in the pan or the beginning of genuine transformation of heart and consciousness. But it must start by all of us saying unequivocally, Black Lives Matter.