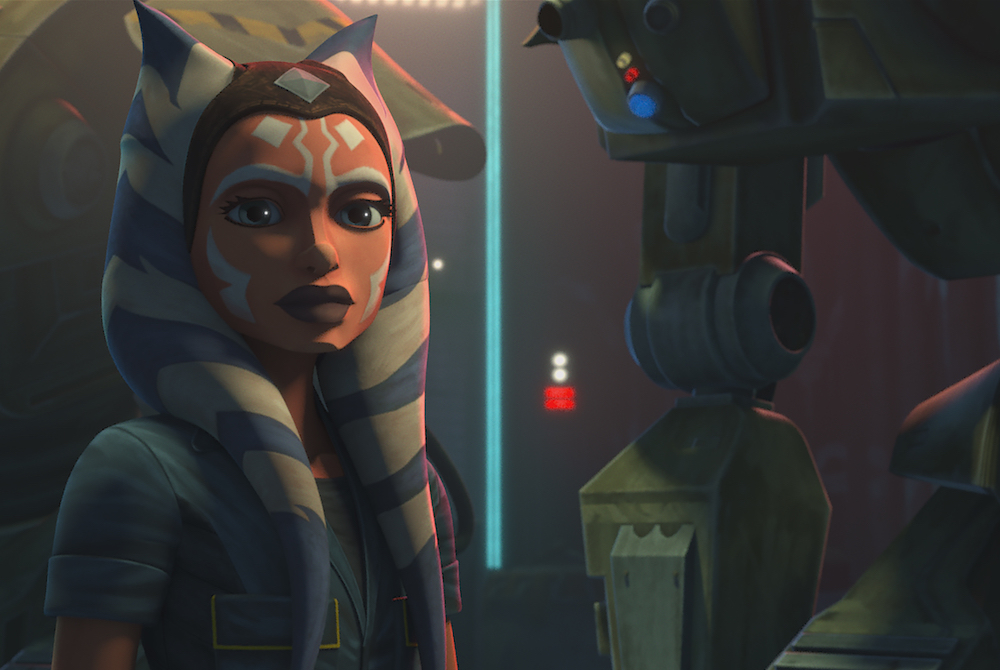 Ahsoka Tano (Ashley Eckstein) is stranded in the underworld of Coruscant in "Star Wars: The Clone Wars," Episode 705, "Gone With a Trace." (Disney+)

As a Catholic woman and a diehard science-fiction/fantasy fan, I'm used to feeling underrepresented.

I learned early on not to hold my breath for three-dimensional women to take center stage in the stories and Scriptures, homilies and home-worlds I loved. I learned to connect with Frodo and Harry and Luke — and with St. Paul and St. Francis and Thomas Merton. But to see the heroic spiritual journeys of women at the fore? Mission: Improbable.

All the great sci-fi/fantasy franchises involve deeply spiritual themes, but "Star Wars" takes it a step further: There is religion. We get a divine Force, an order of peacekeeping monks, even a common blessing ("May the Force be with you"). But while binge-watching "The Clone Wars" animated series after the release of its much-anticipated final season this spring, I was not prepared for Ahsoka Tano.

Ahsoka (Ashley Eckstein) fast became one of the franchise's most beloved Jedi, blossoming from saber-wielding pipsqueak to steadfast peace-seeker. But when she's framed for a crime she didn't commit, the Jedi Council — deep in the pocket of a corrupted Galactic Senate — sides with her accusers and ejects her from the Order. After her name is cleared, the Jedi offer a gaslighting non-apology — "You have become a greater Jedi than you would have otherwise" — and a chance to return to the Order.

And Ahsoka says no. She walks away.

I was floored. By this point, the personal betrayal is only part of the injury. It's really the realization that Jedi have abandoned their identity to back the political power machine that sends Ahsoka walking off (literally) into the sunset.

I watched in shock as a familiar kind of deconstruction unfolded onscreen: A young woman realizing that the institution she loved did not love her back. That the leaders she trusted failed to preserve the core principles of their creed and would continue, again and again, to ally with the powerful. That she must choose between her faith — her connection to the Divine and to herself — and the very community that taught her.

I was, for the first time, witnessing a spiritual journey that felt a lot like mine.

Desperate for more of Ahsoka's story, I plowed through "Star Wars Rebels" — which originally aired from 2014 to 2018 and is currently streaming on Disney+ — set 15 years later. I was relieved when she appeared in the series, different, of course, but undeniably "grown in wisdom and stature," her connection to the Force intact, her path forward clear.

We don't see Ahsoka reconcile with the Jedi; the Order collapses before any bridges have been repaired. But it is she who survives, the wise, wounded woman on the margins who still lives out the truest tenets of the Jedi: selflessness, courage, compassion, balance and peace. The institution may have failed her, but the Source has not, and she knows it.

For many like me, coming of age in today's Catholic Church requires this same separation of faith from institution. It means seeing, not denying, the darkness festering within what was supposed to be a source of light: abuse and the lengthy shadow of coverup, once again back in the American Catholic consciousness, thanks to the release of the McCarrick report; misogyny and sexism fused into our catechism; white supremacy and racism entrenched in our leadership. It means disenchantment, distrust and, often, disengagement.

I have not "left" the Catholic Church. But it's become clear over the years, and again in the last few months, that following the still, small voice of God is increasingly in opposition to following the example of church leadership. Trusting one's conscience when it's in conflict with the community that formed it can feel like rebellion.

Science fiction is by nature prophetic; fantasy is by nature a spiritual exercise. Fiction is not just "escapism" — it shows us our very real hearts on the page or the screen. It gives us the chance to actively participate and imagine different ways forward, to wrangle with the toughest questions we know within the safety of a world just a little removed from our own. A kingdom in a wardrobe. A galaxy far, far away.

We are, after all, a storytelling religion. Jesus told stories to communicate truths and archetypal journeys, giving his disciples room to wrestle with their role in the kingdom of God. He drew connections between himself and the stories he grew up with, placing his world inside a greater narrative. Finding grace, meaning and guidance in stories is our birthright, an exercise of our Catholic imagination.

I ordered a little decal with Ahsoka's symbol for my car. It felt a little like ordering a figurine of a saint to stick on my dashboard. Not because I'll be invoking her intercession, but I will be invoking something else: her faith.

Ahsoka's journey is that of a young woman trusting the primacy of her conscience and finding it to be trustworthy, her faith in the Force leading to faith in herself.

[Jennifer Vosters is a writer and theatre artist from southeastern Wisconsin.]