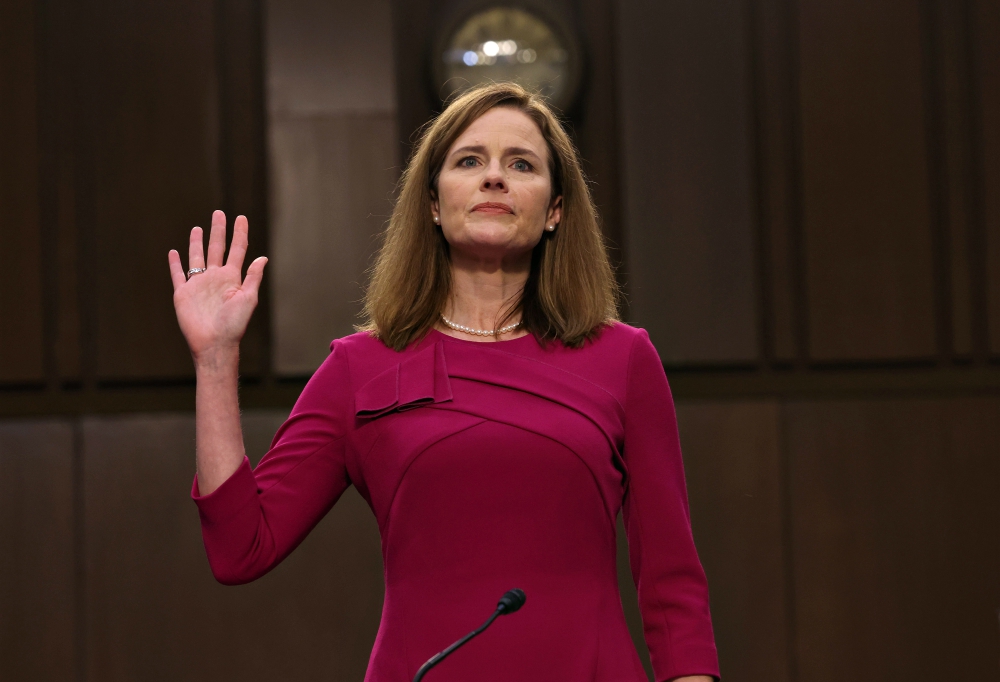 Judge Amy Coney Barrett, President Donald Trump's nominee for the U.S. Supreme Court, is sworn in for her confirmation hearing before the Senate Judiciary Committee on Capitol Hill in Washington Oct. 12. (CNS/Win McNamee, Pool via Reuters)

President Donald Trump's nomination of Amy Coney Barrett to the U.S. Supreme Court seat formerly held by Justice Ruth Bader Ginsburg is heavy with culture war significance. Before her nomination was even official, Barrett was already being lauded as the latest conservative hero — and, in a surprising twist, as a new feminist icon.

The rush to replace the popular iconography of "the Notorious RBG" with "the Glorious ACB" is a study in conflicting ideals about women's identity.

Ginsburg, whether she wanted it or not, was an emblem of everything the religious right hates and fears about feminism. And Barrett, also whether she wants it or not, is now being invoked as the alternative to Ginsburg-style feminism. In the eyes of a demographic routinely hostile to female leadership, Barrett "passes" as an acceptable woman to wield influence in the public square.

In their adulation of Barrett, anti-feminists broadcast a familiar message: Being anti-feminist does not mean being anti-women. The usual argument is that feminism is harmful to women, and conservative ideologues are the true defenders of women's dignity. But now we are seeing a different tactic. While conservative women such as Phyllis Schlafly were revered as anti-feminist icons, Barrett is being presented as representing a new feminism preferable to Ginsburg's.

In a piece in Politico, Erika Bachiochi argues that Barrett embodies "a new kind of feminism":

… a feminism that builds upon the praiseworthy antidiscrimination work of Ginsburg but then goes further. It insists not just on the equal rights of men and women, but also on their common responsibilities, particularly in the realm of family life. In this new feminism, sexual equality is found not in imitating men's capacity to walk away from an unexpected pregnancy through abortion, but rather in asking men to meet women at a high standard of mutual responsibility, reciprocity and care.

Contemporary feminism has even resuscitated the idea of the "feminine" — while recognizing that it has to do with personal aesthetic, not an eternal mandated ideal. Feminists in 2020 can choose to stay home and have babies. They can enjoy dressing up in skirts and heels. And many of them are deeply religious. Non-white feminisms, especially, tend to emphasize the value and power of motherhood.

Still, even older movements of feminism were far more open to the possibility of diverse choices than anti-feminist ideologues realize. Betty Friedan, for instance, wrote about the importance of shared responsibility in the home. Ginsburg was also a wife and mother; why is her own achievement in balancing work with family life ignored? The reality is that feminism has always been far more diverse than its critics like to paint it. 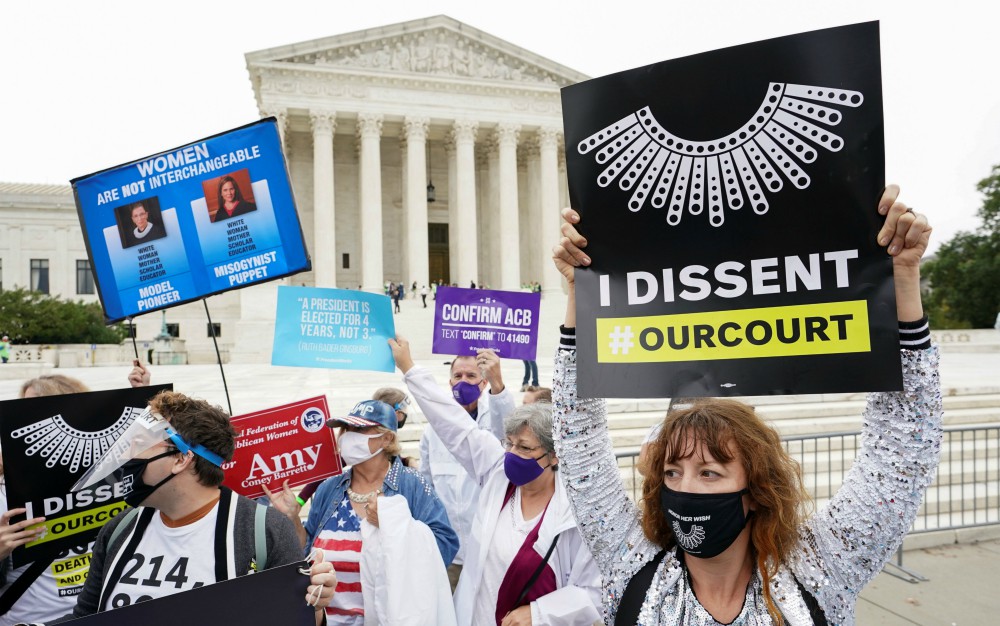 Barrett owes much to Ginsburg's legacy. This does not mean that she is automatically carrying on this legacy, simply by virtue of stepping into the place of influence she occupied. It is not enough for a woman to claim a seat at the table. She needs to work, as Ginsburg did, for other women to be given places as well. And Barrett has not done this.

Pro-choice feminists have made much of Barrett's anti-abortion perspectives as proof that she is anti-feminist, but the issue extends beyond abortion. Barrett is not on record as a defender of women's rights in any arena.

She has ruled against environmental protections, even though environmental degradation disproportionately affects women, especially those of low income. She has ruled against consumer protection. Her history of legal opinions on health care, sexual assault, and immigration suggests she has no intention of advocating for women in vulnerable situations, but rather will uphold the Trump administration's far-right policies that harm women, especially women from less advantaged demographics.

Bachiochi is enthusiastic about Barrett's achievement of a work-life balance, even while admitting that "few mothers of seven could become federal judges, never mind Supreme Court justices." And thus, unwittingly, she admits what all the rest of us are thinking: that Barrett's achievement is rare because few women have the advantages she has.

Barrett was born into privilege: Her father was an attorney for Shell Oil Company. She and her husband can share the work of child-rearing because their family has no fear of financial instability. She can afford to pay for child care, and for many years had the free assistance of her husband's unmarried aunt. These are not advantages that most working mothers enjoy.

Barrett has stated, "Supporting poor, single mothers would be the best way to reduce the number of abortions in the U.S." This is a belief that has been reiterated by consistent-life feminists who are against abortion but wary of the outcomes, should Roe be overturned. It might be tempting to view Barrett as an ally of these activists. But her words ring hollow when held against the reality of her judicial record.

What has Barrett done to work to be sure that other women have the security and support — and the choices — she enjoys? Very little. Barrett seems similar to the women theologians who enjoy a special place at the magisterial Catholic table simply because they dedicate their energy and intellect to supporting the hierarchy.

Bachiochi is right to point out that often the workplace discrimination women face is directly connected to pregnancy discrimination, or a distrust of women who are mothers. Nevertheless, it is naive to assume that returning to a pre-Roe society will fix this. Simply making abortion illegal will not solve the problems of inequality and discrimination that women face. It will not automatically guarantee women more choices, if they are not legally protected from discrimination and provided access to the advantages needed in order to make the kind of choices Barrett has made.

Yes, opportunistic and misogynistic men depend on abortion to evade their own responsibilities. But that does not mean that pro-choice feminists are trying to let men off the hook, or force women to be more like men, or to maintain a culture of discrimination. However we may regard their work to keep abortion legal, we need to note that these women are also working to ensure that all women have the opportunities they need in order to choose life, safely and without financial distress or fear for their livelihood.

We may disagree with their approach to these problems, but at least they are addressing them. Barrett, by contrast, seems content to enjoy the scraps from the table of patriarchy without considering that for women, these scraps are rare, and meted out only to the select few who will return the favor with their complicity.

Ginsburg famously stated, "Women belong in all places where decisions are being made." Out of context, this statement could be misinterpreted to mean that feminism is simply about placing women, any women, in positions of power. But Ginsburg's legacy reminds us that feminism is about equality and representation for women across all of society.

Placing women in positions of power, when those women turn and deny equality or representation to other women, is not feminism. Nor is feminism reducible to supporting women no matter what their choices might be.

Many of the criticisms leveled at Barrett may be misogynistic or discriminatory, but that does not mean that it is sexist or anti-feminist to pose serious doubts about her nomination, given her record.