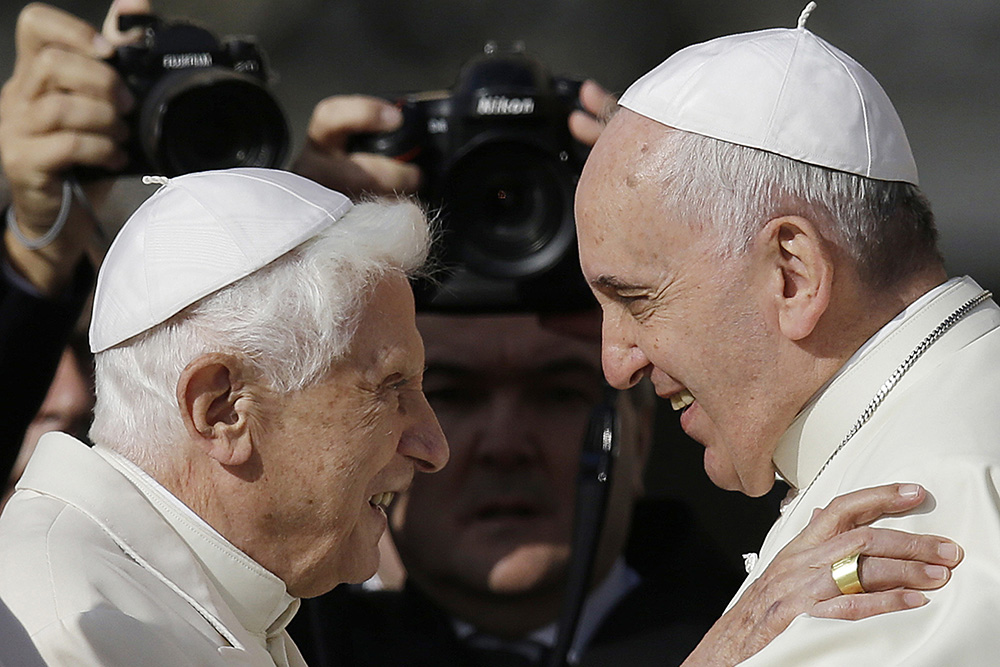 On Sept. 28, 2014, Pope Francis, right, hugs Emeritus Pope Benedict XVI prior to the start of a meeting with elderly faithful in St. Peter's Square at the Vatican. (AP/Gregorio Borgia, File)

When Pope Benedict XVI retired in 2013 — the first pontiff to do so in 600 years — the church had no rules for what a retired pope's role would be or even what he would be called.

After Benedict's resignation, his papal seal and fisherman's ring were wisely broken, as would have happened if he had died. But other decisions about what he would be called, what he would wear and where he would live were made quickly and without any consultation with theologians and canon lawyers. The retired pope became "Pope Emeritus Benedict," and he continued to wear the white cassock and to live in the Vatican.

Because these decisions were largely made by Benedict himself, as long as Benedict was alive, any effort to establish formal protocols could be seen as criticism of him. Any new rules that forced him to change his way of life would have been seen as demeaning, even vindictive.

Now that Benedict is dead, the church needs to set those protocols. Pope Francis can issue new rules that will apply to him, should he retire, and to his successors without disturbing his predecessor. Ideally, a draft proposal of these protocols would be circulated for discussion prior to its codification in church law.

The protocols should be informed by the confusion caused by the experience of having a pope emeritus. When sitting side by side, dressed in white, Benedict and Francis looked like equals. Even the kindness and deference Francis showed Benedict made it seem as if the church had two popes.

The media, which thrives on controversy, scrutinized Benedict's few public words and actions for signs of disagreement with Francis. Archconservatives tried to use the pope emeritus as a foil against the new pope, whom they did not like, and though Benedict condemned such actions, he could not stop them.

None of this was good for church unity. Both conservatives, like Cardinal George Pell, and progressives, like myself, called for protocols that would more clearly show that there is only one pope in the Catholic Church.

"The Directory for the Pastoral Ministry of Bishops" states:

This paragraph could easily be modified to urge retired popes to avoid even hinting at some kind of parallel authority to that of the reigning pope. For the most part, Benedict followed this practice.

Canon law provides that "a bishop whose resignation from office has been accepted retains the title of emeritus of his diocese and can retain a place of residence in that diocese if he so desires, unless in certain cases the Apostolic See provides otherwise because of special circumstances."

Under this canon, if the pope were simply the bishop of Rome, he would be known as the emeritus bishop of Rome when he retired. He would be allowed to live in the diocese, which would be responsible for providing him with "suitable and decent support."

Having the retired pope live in the Vatican causes some confusion, but the alternative is also problematic, because his new residence could become a pilgrimage destination for dissidents wanting to rally opposition to the new pope.

My own preference would be to have him retire to Castel Gandolfo, an extraterritorial property of the Vatican 16 miles southeast of Rome. This used to be a summer residence for the pope, but Francis has not used it. If this location became a rallying place for dissidents, he could always move back to the Vatican.

But there are aspects of the papal office that are unique for which there are no episcopal equivalents.

Popes change their names when they become pope, as Joseph Ratzinger became Benedict XVI. They wear white instead of purple like bishops or red like cardinals. These symbolic changes make the pope stand out as unique in the Catholic Church.

But as symbols of the papal office, a pope should put them aside when he retires.

Related: My encounters with Joseph Ratzinger — and Pope Benedict XVI

Cardinal Gianfranco Ghirlanda, a preeminent canon lawyer who for decades advised Vatican dicasteries and was dean of canon law at the Gregorian University in Rome, noted, "Having two people with the title of 'pope,' even if one added 'emeritus,' it cannot be said that this might not generate confusion in public opinion."

Despite the double negatives, his meaning is clear. Using the title emeritus pope can generate confusion among the public.

He suggested titles like "former Roman pontiff" or "former supreme pontiff," while others preferred simply "emeritus bishop of Rome."

He might even rejoin the college of cardinals, but as a nonvoting member.

Finally, he should put aside his papal garments and use those of a retired bishop or cardinal.

Symbols are important in the Catholic Church. After the election of a new pope, nothing would be clearer than to have the retired pope, dressed as a cardinal, kissing the new pope's ring and swearing allegiance to him along with the other cardinals. This would make it clear that there is only one pope in the Catholic Church.