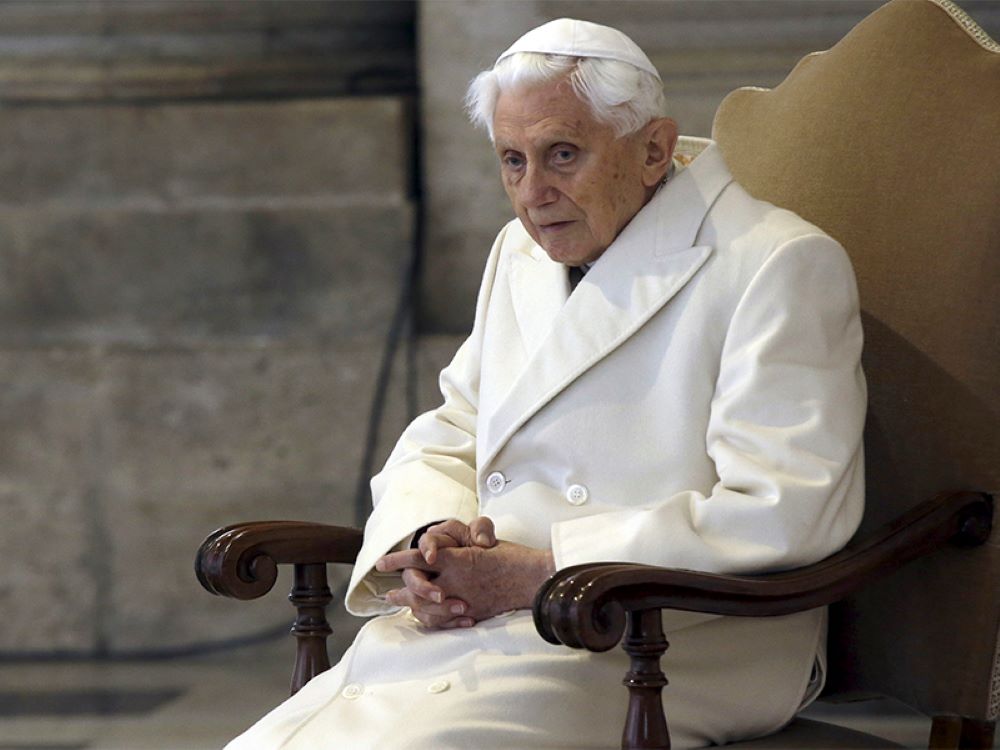 Pope Emeritus Benedict XVI sits in St. Peter's Basilica as he attends the ceremony marking the start of the Holy Year on Dec. 8, 2015, at the Vatican. (AP Photo/Gregorio Borgia)

The cardinals who voted for Cardinal Joseph Ratzinger at the 2005 papal conclave believed they were electing the smartest man in the room. Just as Plato believed that a philosopher king would be the best ruler, they thought that a brilliant theologian would be the best pope.

The church is still debating the cardinals' wisdom. Benedict became an ecclesial Rorschach test, and opinions on his effect on the church ultimately say more about the speaker than the pope himself: Those who approve of Benedict are marked as conservatives; those who consider his papacy a mistake are classified as progressives. Nuanced analysis is difficult.

As a young theologian, Ratzinger advised German bishops promoting reform at the Second Vatican Council. He ghostwrote a speech severely criticizing the Holy Office, the Vatican department responsible for defending the faith, which he would one day lead. He called its methods of silencing prominent theologians prior to the council "a source of scandal to the world."

In these early days, Ratzinger was friends with liberal theologian Hans Küng, who helped him get a professorship at the University of Tübingen in 1966. Student demonstrations there in 1968 soured Ratzinger on the progressive movement, which he saw as turning away from orthodox Catholic theology.

In 1969, Ratzinger abandoned Tübingen for the more conservative University of Regensburg. Ratzinger preferred docile students to those who challenged him. He avoided the rough and tumble of academic debate. You would not see Ratzinger at academic conferences where he could be challenged by his peers.

He did have a loyal following of former graduate students who met with him periodically through the years to discuss theological issues. Even after being appointed archbishop of Munich in 1977, he continued to direct his doctoral students who had not finished their dissertations.

But it was always clear he was the teacher. A Jesuit who brought a group of Americans to meet Benedict at a papal audience introduced the pope as "my friend." The pope corrected him: "You were my student, not my friend." 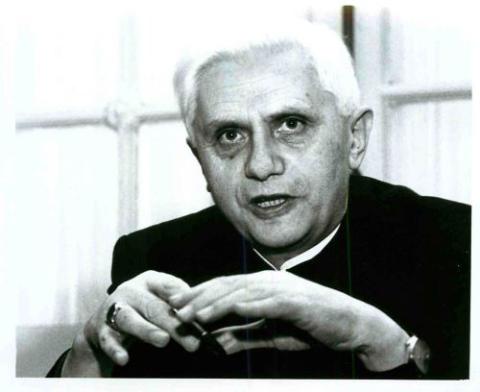 Ratzinger was a prolific writer. His popular Introduction to Christianity, published in 1968, brought him to the attention of Pope John Paul II, who in 1981 appointed him prefect of the Congregation for the Doctrine of the Faith, the successor to the Holy Office he had so vehemently criticized.

As head of the congregation, Ratzinger did many of the same things he had earlier warned against. He treated theologians to the kind of correction he used to apply to his students. If they did not follow his view of orthodoxy, he "flunked" them, taking away their authority to teach and publish. He would also stop the appointment of any bishop he considered suspect.

(Full disclosure: I was forced to resign as editor of America magazine at the insistence of Ratzinger, a story I relate in a separate column.)

He was especially critical of moral theologians in the United States, liberation theologians in Latin America and interreligious theologians in Asia. Also carefully watched were writings on priestly ministry, especially any thoughts on women's ordination or optional celibacy. Any criticism of church authority was suppressed.

The suppression of theological debate under the papacies of John Paul and Benedict was disastrous for the church. The creative rethinking of church teaching begun at Vatican II was squashed. Rather than finding new ways to explain the faith to people in the 21st century, the church repeated formulas many found meaningless.

Papal teaching about women was especially repugnant to educated women, who saw the church as protecting patriarchal values. Describing homosexuality as "intrinsically disordered" was grating, especially to young people.

These papacies also attracted to the priesthood a cadre of young men whose clerical style would be off-putting to many, especially women.

By electing the smartest man in the room, the cardinals had chosen someone who was not interested in listening to people who had other views. A smart leader surrounds himself with people who supplement his weaknesses, not with people who always agree with him. Benedict XVI's great failing was surrounding himself with acolytes who would never challenge him and would insulate him from challenge.

This got him into trouble when he acted on his own without consulting experts. When he spoke of Muslims at Regensburg in 2006, he said things that they found insulting. But rather than consulting Archbishop Michael L. Fitzgerald, the Vatican's expert on Islam, he exiled him to Egypt as nuncio. (Francis made Fitzgerald a cardinal in 2019.)

Benedict angered many Protestant leaders in 2007 when he said that only the Catholic and Orthodox churches were true churches because they had legitimate bishops; the others, he said, are only "ecclesial communities." Jews were upset when he lifted the excommunication of antisemitic schismatic bishops in 2009.

In both instances, problems could have been lessened if he had consulted ecumenical and interreligious experts before acting.

Benedict's heart was in the liturgy and spirituality of the past, which attracted only a minority of Catholics, let alone those outside the church. For the liturgy, he ignored the advice of translation experts, preferring literal translations that read as if they had been run through Google translations and were difficult to understand when read out loud.

The Benedict papacy did advance the church in its handling of clerical sex abuse. I suspect there were a lot more cases of sex abuse in Munich while he was archbishop than ever revealed, but as head of the Congregation for Doctrine of the Faith, he did listen to American bishops' concerns when other cardinals stonewalled them.

When his congregation was assigned abuse cases, the disciplinarian tendencies that led him to police theologians allowed him to cut through canonical niceties to expel hundreds, perhaps thousands, of abusers from the priesthood. His response was never perfect, but he did understand and deal with the problem quicker than any other Vatican official, including John Paul. As pope, he met with victims of abuse but did little to deal with bishops who had covered up their crimes.

He also listened to the international experts in the Secretariat of State, which kept him from making mistakes in foreign affairs. Here he was not an innovator, but continued the Vatican line of his predecessors. He upheld the social teaching of the church and began dealing with climate change, but these were never a principal focus of his papacy.

Benedict also made the critical decision to subject the Vatican finances to review by Moneyval, the international agency created to stop money laundering and the financing of terrorism. This was the first time the Vatican opened itself to review by an outside body. Because of Benedict, Moneyval periodically reviews and publicly reports on the Vatican's progress, or lack of it, on financial reform.

Finally, Benedict dramatically changed the papacy by resigning, making it possible for popes to resign in the future. What in the past was unthinkable, now is acceptable.

Benedict was a humble man who wanted what was best for the church. He trusted that the Holy Spirit could guide the church without him. He supported his successor and for the most part stayed silent, though supporters and detractors tried to spin his few statements as attacks on Francis.

No doubt there will be a conservative movement to canonize Benedict with cries of "santo subito" ("sainthood now") as a way of carving his teachings in stone. I oppose the canonization of any pope, but I have no doubt he is in heaven. If I had to place a bet, I would predict that Benedict and Francis will be canonized on the same day, just as John Paul II and John XXIII were. That is what unity looks like in the Catholic Church.

Benedict XVI's great failing was surrounding himself with acolytes who would never challenge him and would insulate him from challenge.

This story appears in the The Ratzinger/Benedict XVI legacy feature series. View the full series.
A version of this story appeared in the Jan 20-Feb 2, 2023 print issue under the headline: Pope Benedict XVI was at heart a German professor. 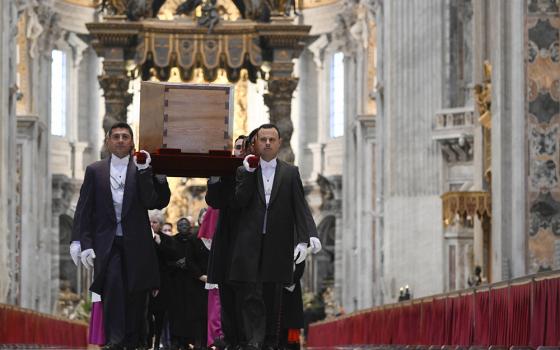 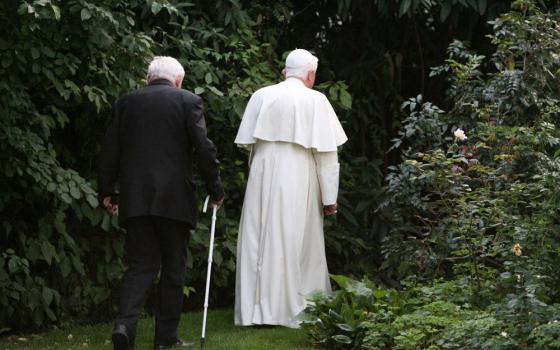 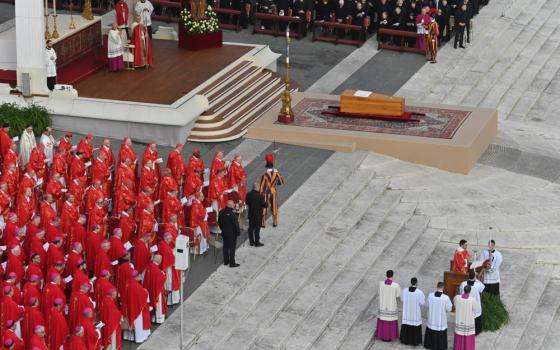 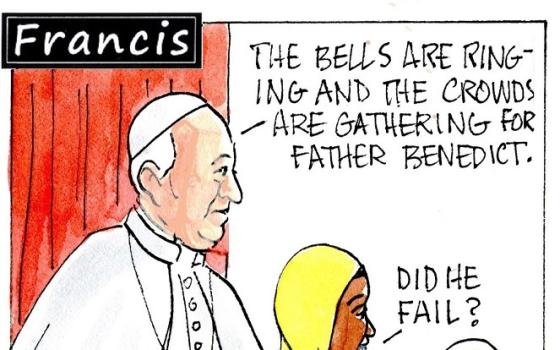