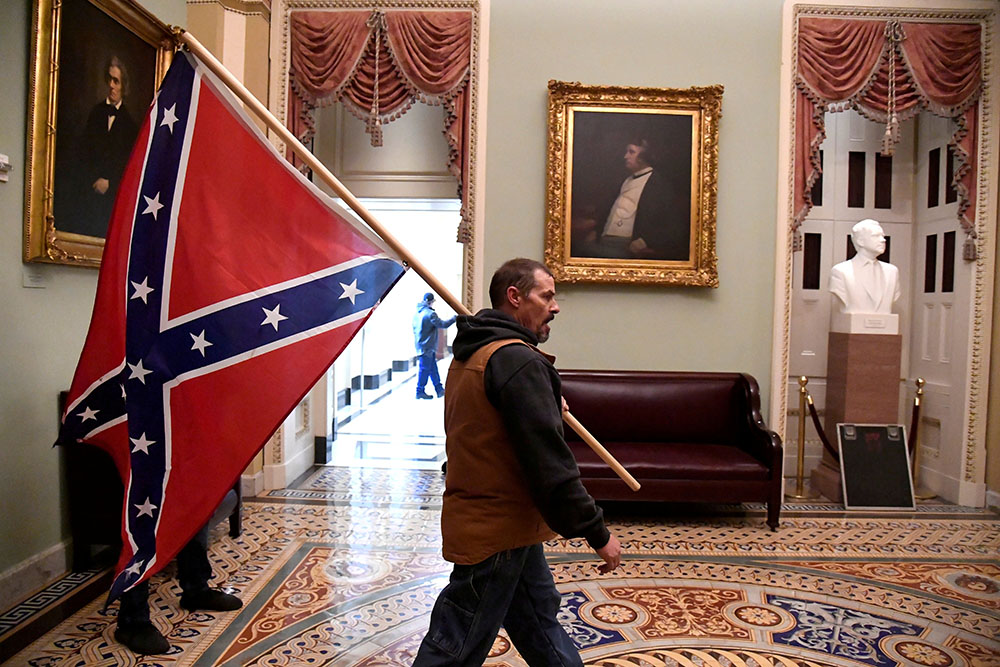 A supporter of President Donald Trump carries a Confederate battle flag on the second floor of the U.S. Capitol building in Washington near the entrance to the Senate after breaching security defenses Jan. 6. (CNS/Reuters/Mike Theiler)

One of the most vivid and troubling images from the insurrectionist attack on the Capitol was a man carrying a large Confederate flag through the halls of the Capitol. So much blood was once spilled to prevent that flag from being waved in this exact place just over a century and a half ago. And it is a testament to the leadership of Abraham Lincoln and the sacrifice of American patriots that this never happened.

The presence of this flag, carried by people who imagine themselves to be patriots, is a reminder that there have always been two competing forms of nationalism and patriotism in this country.

On the one hand, you have civic nationalism, rooted in universal commitments — the belief that all persons are created equal and endowed by their Creator with certain unalienable rights. To be an American means to be devoted to those rights, to freedom, to democracy.

The foundation for this devotion could be the philosophical liberalism or republicanism of the Founders, but it can also be found in the personalist commitments at the heart of the Catholic faith: our belief in the equal dignity and worth of each person, endorsement of universal human rights, preference for resolving conflict peacefully, and recognition of people's right to participate in their own government.

Now most of us who believe this is the proper foundation for our republic know how frequently we have failed to live out these ideals throughout this nation's history. Slavery is compatible with neither freedom, nor authentic democracy. The same is true of segregation. And to this day, we continue to allow for the depersonalization of human beings and fail to safeguard their most fundamental rights — whether that is families intentionally ripped apart at the border, or unwanted unborn children, or those who still suffer from the scourge of racism.

Yet our highest ideals can still propel us forward toward the creation of a more just society. During the Civil War, Lincoln came to the realization that preserving the union was a worthy goal, but for the dead who sacrificed their lives for the country to have truly not died in vain, we would need "a new birth of freedom."

Franklin D. Roosevelt realized that freedom must include freedom from want and that real equality demanded a Second Bill of Rights to ensure that freedom.

In his "I have a dream" speech, Martin Luther King Jr. challenged America to be great, to live out the universal principles of the Declaration of Independence, and "to make real the promises of democracy." Our understanding of freedom and justice has been refined and our commitment to them has expanded, often with the help of Christian thinkers and activists like King.

At the same time, there has been a competing nationalist vision that has challenged this civic nationalism throughout the country's history. It is an ethnic nationalism that is dedicated to the preservation and strengthening of white supremacy. And it is antithetical to authentic Christianity, though many American Christians have embraced it and distorted the Christian faith in order to defend it.

It is this nationalism that inspired the Confederates' treason. As children, we are taught that the Civil War was about slavery. Later, we may learn about tariffs, states' rights, why poor Southerners fought, the ambivalence of certain people in the North to the cause of black freedom, and more details about this seminal conflict and what led to it. Yet none of these details should obscure the big picture. The South fought to preserve slavocracy. Their motive is crystal clear when one examines the words of their leaders or looks at the South Carolina Declaration of Secession with its litany of complaints centered on the fear that slavery was under threat.

In the Civil War, the ethnic nationalists lost. But they did not disappear. Andrew Johnson, Lincoln's successor, actually embraced their same approach, saying, "This is a country for white men, and by God, as long as I am President, it shall be a government for white men."

The former rebels faced relatively few repercussions for their traitorous actions. And they worked to undermine Reconstruction and the integration of Black Americans into our democracy. They engaged in outright terrorism.

And it ultimately worked. The Republican Party's commitment to racial justice faded, the U.S. military was withdrawn from the South, democracy was shattered, and Jim Crow segregation took its place, thanks to a Democratic Party that chose white supremacy over democracy and economic justice.

It was not a surprise then that ethnic nationalists were waving that Confederate flag when they resisted the integration of schools and voting rights for black Americans during the civil rights era. It has become a symbol for ethnic nationalists of the struggle against democracy, equality and the other universal commitments that civic nationalists hold so dear.

It was likewise not a surprise to see members of the insurrectionist mob waving this same flag. President Donald Trump was elected on a populist nationalist platform, the latest iteration of ethnic nationalism.

Populist nationalists promise to protect the people and defend their interests — but "the people" is narrowly defined. Trump promised to build a wall to keep out Mexican "rapists and criminals." He trampled upon religious freedom in his attempt to ban Muslims, whom he often treats as terrorists or potential terrorists, from traveling to the U.S. He has championed the police, as the Black Lives Matter protests seek an end to police brutality and to ensure greater accountability. When neo-Nazis and other white supremacists marched in Charlottesville, Virginia, he said there were good people on both sides.

Racism and other forms of bigotry are integral to populist nationalism and Trumpism. They are integral to who Trump is as a person and as a politician. When he refused to accept the clear results of the election and instead mobilized his supporters to try to steal the election, it was clear that others would join this attack on American democracy — and not just those ill-informed everyday Americans who sincerely believe his lies, but anti-democratic ethnic nationalists in the House and Senate who knew perfectly well there was no widespread fraud.

Looking forward, the question is: Will this attack be a turning point? Will we wake up as a country, hold those who tried to destroy our democracy accountable, and strengthen our democratic institutions and norms, or will ethnic nationalists maintain their hold on the Republican Party, escape real accountability, and continue their assaults on American democracy?

This is a domestic issue, but the consequences are global. Despite our flaws as a nation, those who have fought for freedom, democracy and human rights around the world have often been inspired by our grand experiment and the persistence of our democracy. Since the founding of this country, reactionaries have been hoping to prove that government of, by and for the people is bound to fail — that we should instead be ruled by dictators who crush their opponents and maintain stability, technocratic authoritarians who trample on freedom, or inbred monarchs who inherit their thrones.

Civic nationalism and the patriotism of Lincoln and FDR and King are rooted in the belief that we can do better than that. And that we can move toward a more perfect union, where our highest ideals are better realized. We can still be an inspiration to those who fight for their fundamental rights, including the right to participate in their own government, but that means we have to get our own house in order and permanently shatter the pernicious dreams of ethnic nationalists.