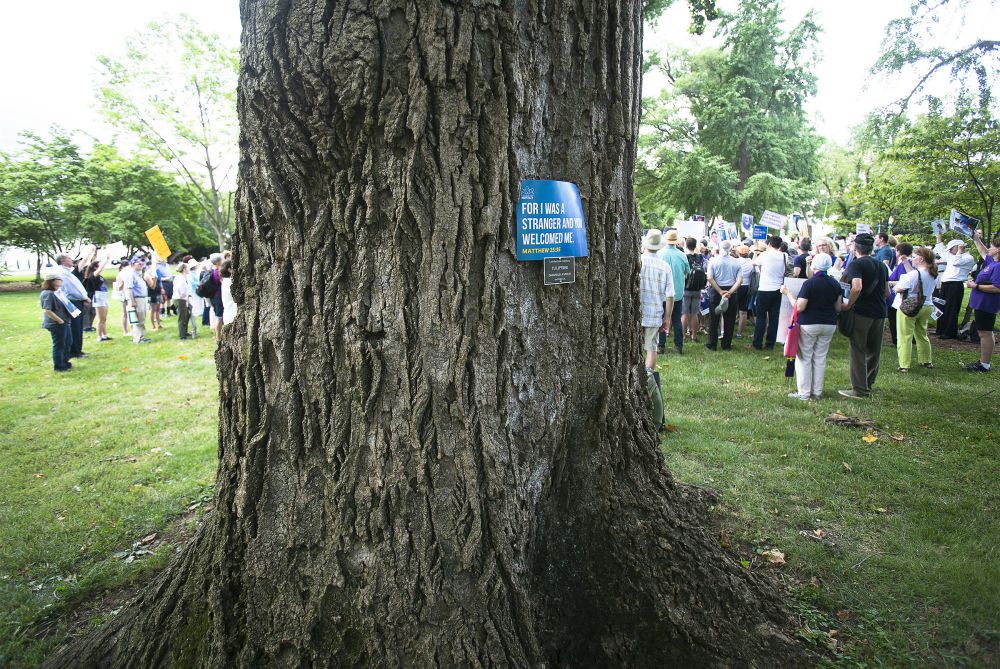 Catholic leaders and advocates protest the Trump administration's handling of detained immigrant children during a "Catholic Day of Action for Immigrant Children" July 18, near the U.S. Capitol in Washington. (CNS/Tyler Orsburn)

It's been more than a month since I took part in the Catholic Day of Action on the U.S. Capitol grounds, to call attention to the Trump Administration's inhumane immigration policies, and the world continues to spin off its axis, each day bringing new cruelties from the White House.

It was so hot the morning of July 18 that I grew lightheaded standing outside during the rally before our act of civil disobedience, my first. I was nervous about it. It seems silly, now, to be scared about getting deliberately arrested. Sillier still to need to sit in the shade of a tree after walking a mile to the metro in the heat when my migrant sisters and brothers had walked — were walking still — from Honduras and Guatemala, El Salvador and southern Mexico, in search of a safer, better life.

We were several hundred that day protesting the treatment of those same migrants, and especially the detention of children, at the border. If nothing else, you'd think the thought of children in cages would get people protesting in the streets of Washington, D.C. But as I said, it was hot, and people here are busy and important, and attention spans are short, perhaps especially during the summer. The Capitol Police officers would tell us later that they'd arrested far more people last year protesting the nomination of Brett Kavanaugh to the Supreme Court than protesting the detention of migrants at the border. For what it's worth, I protested him, too, although not to the point of arrest. A cynic might say that even my sense of futility has its limits.

We were, all in all, a jolly group, considering the circumstances, although it was tiresome being handcuffed, and the second set of cuffs was tight. While several of us on the women's side of the bus had slipped our wrists out of the first set of heavy plastic zip ties, there was no getting out of them at the warehouse.

But there, at least, I had the good fortune to be seated behind Mercy Sr. Pat Murphy, who, at 90 years old, is a veteran protester and was no stranger to our present circumstances. Another sister was celebrating her birthday that day, and a third told me stories of being arrested years ago alongside the Berrigan brothers. As a lay staffer at the Institute of the Sisters of Mercy of the Americas, I was — and always am — in good company.

Eventually, after paying the $50 fine, I was released and sent back outside into the heat to make my way home. First, though, and disconcertingly, I received a hero's welcome from the support team camped on lawn chairs in the shade on the next block. Then, fortified with a handful of tangerines and protein bars, I walked to the metro with another protester, chatting about the day's events. It was another mile home from the station, threading my way on foot through rush-hour traffic and thinking about a cold shower and a change of clothes. 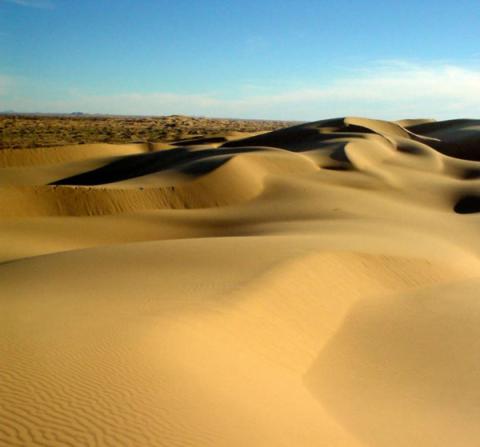 And then I remembered the women at Annunciation House in El Paso, Texas, the ones we'd met in April on a Mercy delegation to the border. A Mercy sister and I were assigned to sort piles of donated jeans in the basement and help migrants find a clean change of clothes after their long journeys from there to here. They were allowed one of everything, but I defy you to deny a young migrant mother a second pair of ankle socks when she asks you — without words, because you don't speak the same language — to bend that rule for her.

And then I imagined spending more than a month in the dirty, sweaty clothes I was wearing — no bathing, no brushing teeth, no privacy and separated from your children. Wandering 40 days in the desert. Told to "go back where you came from" when where you came from is too dangerous to stay, largely because U.S. policies made it that way. I chose a few hours of inconvenience but many migrants have no such choice.

Which brings me to today, just over 40 days later. How many showers, how many changes of clothes, how many iced coffees and avocadoes and two-for-the-price-of-one quarts of summer strawberries later? How many of the children who were in detention on July 18 remain there still, separated from their parents? How much worse will it — could it — get now that the administration has shredded the protections of the Flores agreement and granted itself the right to detain migrant families indefinitely?

Later on the night of our arrests, at a reflection dinner for protestors, Sister Pat, who traveled from Chicago, said she couldn't not be in Washington for the Day of Action. She held my hands, looked into my eyes and told me I looked tired, which made me laugh out loud at a moment when tears seemed the only sane response to an insane situation. But then I remembered that the migrants I met in El Paso weren't crying, they were getting ready for the next leg of their journeys, and the next. And it was for them that we had spent the day hot and uncomfortable and inconvenienced. It felt like the very least we could do, to accompany them in spirit and, when possible, in body, until the world stops spinning off its axis and rights itself, no matter how many days in the desert that takes.

Read this next: Catholic Day of Action protesters arrested in stand against child detention