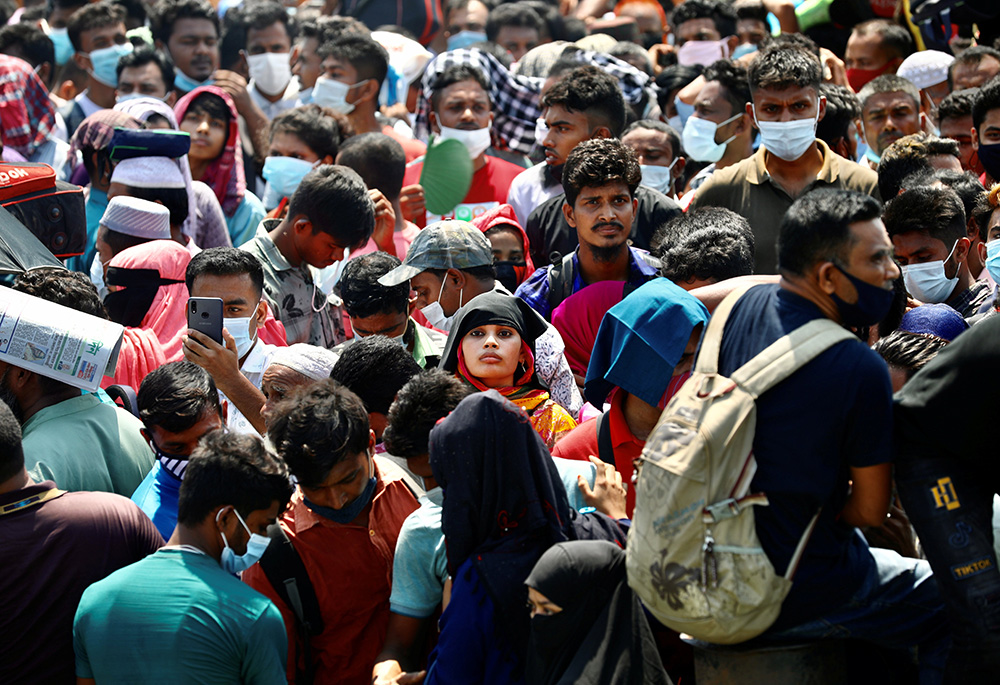 Editor's note: For many years, Maryknoll Fr. Bob McCahill has been sending an annual letter to friends at Christmastime, chronicling his experience living among the people of Bangladesh. Since 1984, NCR has published his annual letter near Christmas. The following is an edited version of his 2022 letter.

Every three years I move from one district of Bangladesh to another. This marks my 14th time to "start all over again." That's how life has gone on during these past 47 years. Not even the COVID-19 pandemic has disrupted that three-year cycle. In this year's message, I'll describe the happenings in Chandpur district where I lived during 10 of the 12 months and in Munshiganj during the remaining two months.

Eid al-Fitr is the Islamic festival Muslims hold as dearly as Christians hold Christmas. My role during that Islamic celebration, while not notable, is heartily offered. I merely go around, on foot or by bicycle, offering to shoot photographs of persons willing to pose. Meanwhile, I keep my eyes and ears open to learn about children having serious health problems whom I hope to contact after the holiday.

A pediatric surgeon and his team have done splendid work for poor children I had brought to them. In addition to their professional skills, the team leader offers to contribute financially to their care. I encouraged Dr. Saroar to simply continue giving surgery freely to the children of the poor. Blessed service.

While photo-taking is often my intention during holidays, it should be admitted that not all Muslims are happy to accept the offer. Some have a religious problem with portraiture and others cannot understand why a stranger would wish to share with them in that way. Portrait photos, we agree, are for those who appreciate them.

One of my regular contacts during these three years lives on the railway station platform. Salma and her daughter Mim, age 2 1/2, keep their belongings in a gunnysack and are often seen walking around town hugging one another and lugging that sack. Amazing that Mim has survived infancy. It always makes me glad to see them — and they to see me — for Mim receives an egg each morning due to our acquaintance.

Maryknoll Fr. William Irving Tillson was beginning to work here among Muslim neighbors during his first year in the missionary priesthood. He died from an illness. Fr. Lintu Roy of the Chittagong Archdiocese built a fitting and humble marker at his grave to commemorate Irv's sacrifice.

Subhan, a hyperactive boy, was waiting impatiently for a doctor to examine him. The 6-year-old stripling squirms continuously and needs constant adult attention. How heroic his grandparents are to give him that care 24/7.

On my last day in Chandpur, I bid goodbye to my three close brothers, men who had been unfailingly helpful to me during my three years of sojourn among them: Jakir, Narayan and Kabir. On my way out of town, I dropped in on our young Mayor Jewel. He noticed I was eyeing the strong cardboard carton beside his desk, which could be so useful for transporting my gear to a new district in Bangladesh. So, with smiles, he gave it to me.

Now I must advance to another town and district. But how to get there? I didn't even know where to catch a bus going to Munshiganj.

The district's largest town, where I would normally settle down, lies so far to the east in this district that I shall probably have to look around for a more central place from which I can travel in all directions in search of children in need.

During my first visit to Tongibari subdistrict, I visited Dr. Afzal in the emergency ward when, suddenly, a recently battered woman was brought to him. Thus ended my visit to that population center. Fifteen kilometers away from there in Louhajong subdistrict, friendly Swapon guided me to see some kids in need. Ten kilometers farther along in Baligaon Bazar, Dr. Bacchu introduced me to teachers and pupils at two schools. He hints also to give me a place to stay. Such a hopeful start in Munshiganj district!

Most of the first half-month I'd spent in this new district I had been able to travel by launch. Three minutes into our earliest journey I was suddenly thrown off the bench and on to the deck, as were many. We had run onto a sand-hauling barge, but recovered nicely. Expect the unexpected. Recently I was delighted to hear a song from the U.S. titled "I Believe Most People Are Good."

That's true of Bangladesh, too.

Hospitality, help and reunion amid COVID-19 in Bangladesh
A version of this story appeared in the Dec 23, 2022 - Jan 5, 2023 print issue under the headline: My 14th time to 'start all over again' in Bangladesh.