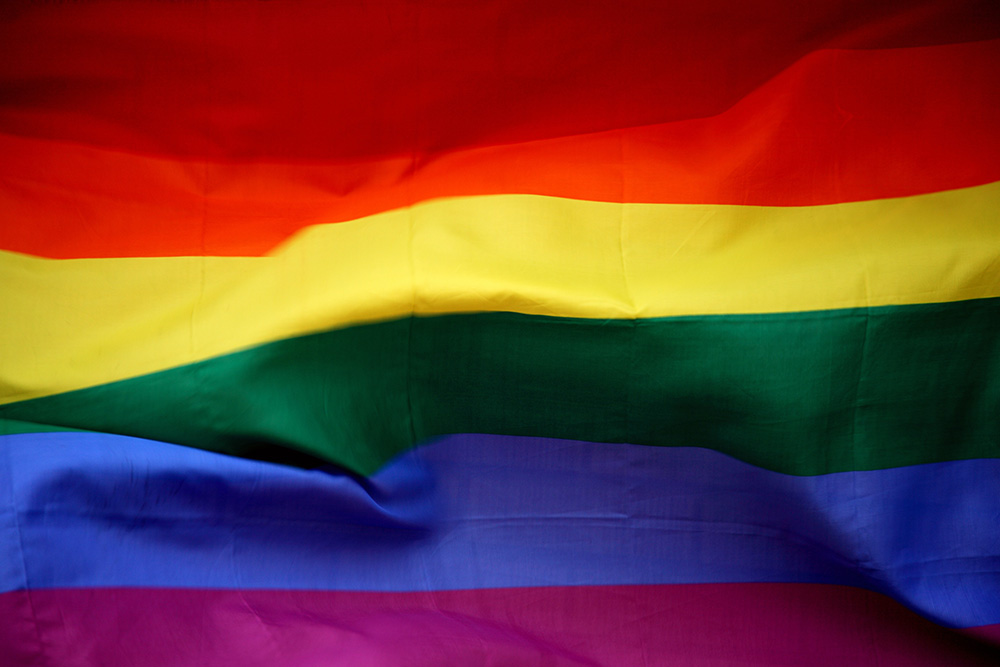 The news of Pope Francis' endorsement of civil unions for same-sex couples in the new documentary "Francesco" has taken the Catholic world by storm. Progressive Catholics have applauded the remarks as a major step forward in the church's pastoral attitude toward LGBT people. Conservatives have decried it as a break with official church teaching and a tacit approval of sexual immorality.

The secular media coverage, of course, will focus on a "reversal" of church teaching. And many Catholics, too, will assume that Francis has simply changed the doctrine of the church by fiat, and that now the Catholic Church has accepted same-sex couples universally into the fold. But Francis' comments must be read in context.

Related: Pope's civil union comments appear to be taken out of context

To begin with, Pope Francis has historically opposed efforts to inscribe same-sex marriage in law. And he still does. The idea of civil unions for same-sex couples is intended by Francis as a compromise: one that makes room for LGBT people to enjoy some protection of the law without damaging the theological integrity of marriage. Its purpose is to insulate the ecclesial and sacramental character of marriage from intrusion by same-sex couples.

In fact, it is not the first time that Francis has taken the position that perhaps same-sex couples should have access to civil unions. Speaking both as archbishop of Buenos Aires and in occasional interviews after his election to the papacy, Francis has gestured toward civil unions as a measure to avoid the legalization of same-sex marriage as such.

Moreover, the reasoning behind Francis's proposal is not new. It has roots in the history and tradition of the Catholic Church. In countries such as Mexico, for instance, Catholics have for more than a century accepted a firm distinction between civil and religious marriage, the result of a long history of struggle between the government and the church over questions of ecclesial authority in the secular realm. I remember quite regularly hearing relatives and friends describe the two-stage process of getting married as a Catholic in Mexico: se casaron por lo civil y mas luego por la iglesia.

Most European countries today practice a similar division. The case of the American Catholic Church, in which priests serve simultaneously as agents of the state and ministers of the church, grows more and more extraordinary (and it raises serious theological problems).

Francis' proposed distinction between canonical marriage and civil unions has roots even further back in the history of the tradition. Thomas Aquinas himself, the great monument of post-Tridentine Catholicism, insisted that personal morality and human law were not identical. The law, he said, exists for the sake of the common good, and so it should only permit or forbid things in light of their effect on the good of the whole community. Thus, there are any number of evidently immoral activities or styles of life that ought to be permitted by the law, or perhaps even protected, so long as doing so conduces to the common good. Aquinas references the venerable Augustine on this point, who offered the example of prostitution as an immoral activity the law should not forbid.

So it is entirely thinkable, from a within Catholic theological understanding, to propose civil unions for same-sex couples, even while affirming that such relationships are immoral. This relies on a hard distinction between civil law, on the one hand, and moral or ecclesial law on the other. And Pope Francis very clearly places same-sex relationships on the far side of the line. 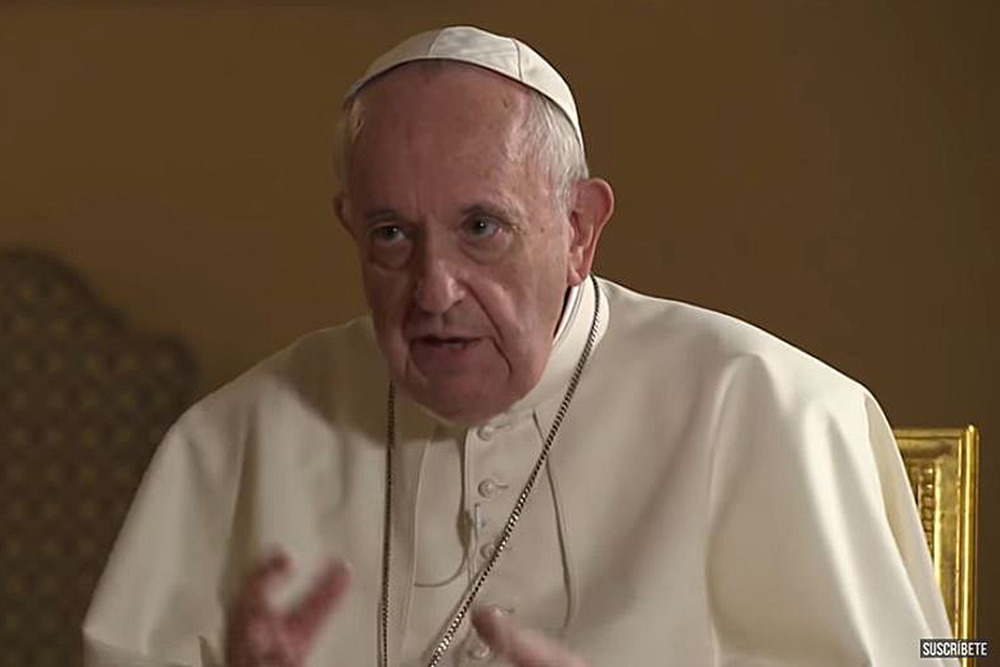 Pope Francis speaks with Valentina Alazraki of the Mexican television station Televisa during an interview that aired in May 2019. A clip, apparently cut from the interview and shows Pope Francis talking about “civil unions,” is used in the documentary "Francesco" by Evgeny Afineevsky. (CNS screenshot/Noticieros Televisa via YouTube)

Francis' remarks are also in complete continuity with the central theme of his papacy, which has privileged mercy and inclusion over moral judgment. "Homosexuals have a right to be a part of the family. They're children of God and have a right to a family. Nobody should be thrown out, or be made miserable because of it," says Francis in the new documentary.

Quite right! The "throwaway culture" against which Francis so fiercely preaches invades the very heart of the church when Christian parents, for purportedly Christian reasons, discard their LGBT children as broken, polluted things.

Christian religious motives are the most frequently cited reason for LGBT youth homelessness, according to Carl Siciliano, founder and executive director of the Ali Forney Center in New York City. Young people, made to believe that they are unworthy of family, are turned out onto the streets where they are exposed to the violence of poverty, drug use and sexual assault, while trying to survive, often through sex work.

For Francis to affirm so boldly that LGBT people are "children of God," that they deserve to be part of a family, and indeed that their relationships have a place in our communities is an enormous act of mercy. Without a doubt, many LGBT Catholics were brought to tears by the news of his comments. It was, for most of us, the first time in which the church looked at us and saw not disordered creatures but persons who belong.

Some of us, from the comfort of our progressive environments, may not appreciate how badly this message is needed in the global church. Bishops around the world still militate against LGBT people, regarding them as a plague or as infiltrators of the true church, or working to criminalize homosexual activity. One thinks especially of the anti-LGBT work of bishops in Poland and in certain African countries. Pope Francis has just made their work much harder.

But LGBT Catholics still deserve more. While civil unions may offer security and inclusion to same-sex couples as far as the law is concerned, they cannot do so within the church. I applaud Francis for his courage and for the care he offers to those who live "on the existential peripheries." But frankly, to keep LGBT people at the peripheries and to make life on the margins just a bit more livable through legal arrangements that do not transform the life of the church is not good enough.

My heart breaks at the polarization we see in the church. But I have never understood why LGBT people, already relegated to the margins of church life, should shoulder the burden of inhumanity for the sake of avoiding schism.

Radical mercy brings those at the margins to the center. There is a host of LGBT Catholics who know in their bones and in their souls that the love they share with other people of the same sex is a sacrament of God's grace, and therefore that it is marriage in the fullest sense. Their unions and the families they create are a gift to the church, which the church still refuses to receive.

Some well-meaning Catholics may bristle at this point. Of course, they say, LGBT people deserve more. Surely their love is sacramental. But the church is too divided right now. This is as far as Pope Francis can go, and even this small gesture of mercy toward LGBT people may bring about schism.

Like any other Catholic, my heart breaks at the polarization we see in the church. But I have never understood why LGBT people, already relegated to the margins of church life, should shoulder the burden of inhumanity for the sake of avoiding schism.

I do not want to undervalue the power of what Francis has said or the good it will do for LGBT people around the world. To insist upon civil unions for same-sex couples is to affirm that their relationships deserve a place in the family and contribute to the common good. This is precisely a theological statement, since the common good is nothing other than the social expression of God's desire for humanity.

This is a reality that Francis or some future pontiff will need to confront. Because if all this talk of civil unions does indeed place LGBT Catholics in the center of the family, at the heart of the common good, then the church can no longer claim they are threat to the basic unit of society or the integrity of the whole. It must admit that same-sex couples can, in fact, contribute something to the work of human flourishing, which for Christians is always rooted in the liberating work of God. It must admit, in the end, that same-sex couples can embody the grace of God for the church and the world as they strive, just like opposite-sex couples, to love as Christ loves.

[Xavier M. Montecel is a doctoral candidate in theological ethics at Boston College, where he works also as an adjunct faculty member in the Department of Theology. He is also an adjunct faculty member at Salve Regina University. His theological studies have taken him also through Fordham University and Harvard Divinity School. His research focuses on the relationship between liturgical theology and moral theology.]