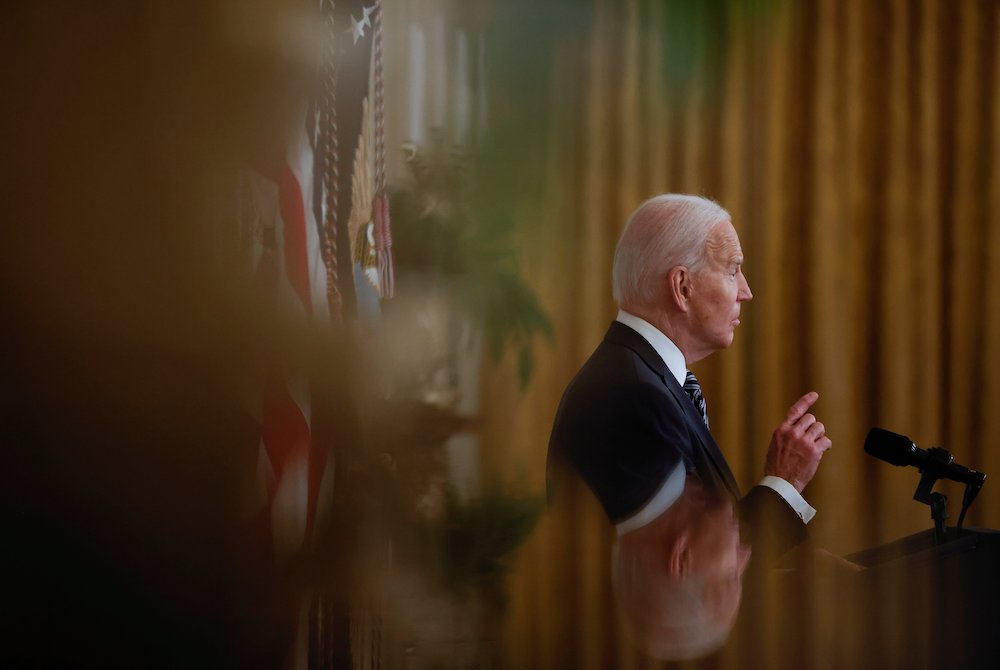 President Joe Biden delivers his first prime-time address from the White House in Washington March 11, 2021, marking a year since the World Health Organization declared the coronavirus a pandemic and the first anniversary of widespread shutdowns to stop the spread of the virus. (CNS/Reuters/Tom Brenner)

On the inauguration day of America's second Catholic president, U.S. Conference of Catholic Bishops (USCCB) President Archbishop José Gomez issued a statement marking the occasion. The text expressed hope for cooperation between the bishops and the new U.S. president. However, it was strikingly critical of President Joe Biden for several policy positions. Multiple bishops endorsed the statement, but Chicago Cardinal Blase Cupich criticized both the document's content and publication process. These "Dueling statements from US bishops" illustrate the uncertainty about how the U.S. episcopate will engage President Biden.

Jesuit Fr. Thomas Reese observes that since inauguration day, U.S. bishops' conference press releases about Biden's policies have been notably positive. However, our research about the disparities in how the bishops' conference publicly discussed Presidents Donald Trump and Barack Obama leads us to anticipate that church leaders may be more overtly critical and less overtly praising of Biden moving forward.

We suspect this will be the case out of the conference's desire to preserve an informal alliance with the Republican Party especially based on shared legislative priorities and strategies around abortion, religious freedom, and same-sex marriage. If this occurs, it is likely to damage the relationship between the bishops' conference and Biden and prevent fruitful collaboration on pressing issues.

Our research began after a series of viral tweets in 2019 claimed a bias in how the conference's press releases criticized Trump and Obama. The tweets alleged the bishops' conference was more likely to criticize Obama by name, whereas criticisms of Trump referred vaguely to "the administration" or "the federal government."

We set out to test these claims in a more comprehensive, systematic and nuanced way, looking both at statements by individual bishops at the diocesan level as well as statements from the body of bishops.

Our dataset at the diocesan level was 12,077 columns written by every ordinary U.S. Catholic bishop between June 2014 and June 2019 in the official publications for 171 of the 178 U.S. Catholic dioceses. At the national level, we compiled the 1,004 bishops' conference news releases from the same time period as our dataset of bishops' diocesan columns. We coded any sentences that mentioned Obama or Trump by name while in office, or used "the administration" in clear reference to either president while in office without using his name.

According to our research of USCCB statements:

Why did the bishops' conference use discursive maneuvers to mitigate and distance their criticism of Trump by avoiding the use of his name? According to the original viral tweets, "This is because many in the U.S. Catholic hierarchy seek good relations and influence with members of the Trump Administration/the GOP in the hopes of receiving pro-life judicial appointments and Executive Orders on things like conscience protections for healthcare workers." 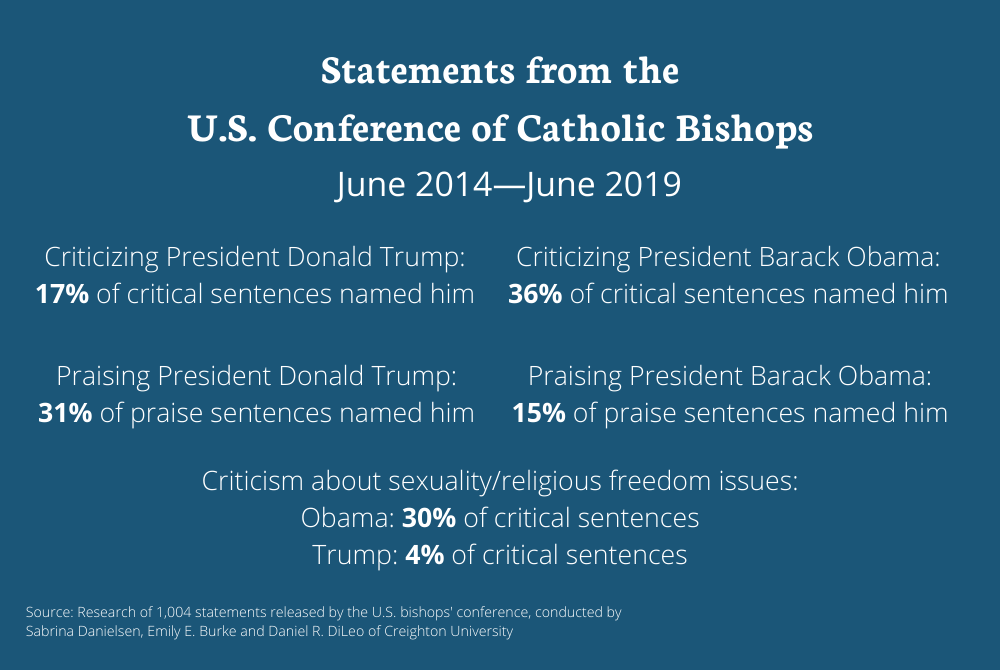 Steven P. Millies describes in Good Intentions that the relatively conservative theology and sociocultural vision of Pope John Paul II led to nearly 30 years of conservative U.S. bishop appointments. Additionally, increasing cultural assimilation and affluence of mid-20th century U.S. Catholics contributed to an increasing number of Catholic Republican households in which future bishops were raised (Archbishop Rembert Weakland observed this to theologian Daniel K. Finn who approved our sharing this communication here). It is therefore unsurprising that Reese cites Richard J. Gelm in A Flock of Shepherds that U.S. bishops appointed by John Paul II were more likely to be Republican than those appointed by Paul VI.

Following John Paul II, John Allen Jr. describes how Pope Benedict XVI continued to appoint U.S. bishops "who are basically conservative in both their politics and their theology." Since then, 47% of U.S. bishops who responded to a 2016 survey by the Center for Applied Research in the Apostolate at Georgetown University said the conservative Fox News channel was their primary source of cable news — a higher percentage than for any other channel. Today, these "Conservatives still rule the US bishops' conference."

The U.S. bishops' shift toward the Republican Party can also be attributed to several related dynamics: shared prioritization of abortion as the "preeminent" social problem and a corresponding judiciary-focused strategy to address this issue; "the rise of neoconservative Catholics" that current USCCB staff member Todd Scriber recognizes in A Partisan Church and who shape Catholic discourse; wealthy political conservatives who support bishops' activities and advocate a "uniquely American version of Catholicism;" the influence of organizations like the Knights of Columbus that fund the bishops' conference along with politically conservative initiatives; the increasing political partisanship of conservative Catholic media like EWTN that provide platforms for "neoconservative Catholics" and has been described as having become the " 'Fox News' of religious broadcasting;" and increasing numbers of U.S. bishops' conference staff coming from conservative colleges and institutions, as John Gehring — himself a former USCCB staffer — describes in The Francis Effect.

The idea that the U.S. bishops' conference distanced their criticism of Trump compared to Obama to preserve an alliance with the Republican Party is further supported by our research into the most common topics addressed in the bishops' sentences of praise and criticism. In general, we found that the bishops were more likely to criticize Obama than Trump about sexuality and religious freedom — areas where the bishops and Republican Party largely share priorities and strategies — and were more likely to praise Trump than Obama about those issues.

Second, praise was overall rarer than criticism, so differences there were less stark. However, the most notable pattern is that 66% of praise sentences for Trump were about sexuality issues, both named and unnamed and at both local and national levels. Obama received zero praise sentences about sexuality issues at any level, whether named or unnamed.

Unexpectedly, the bishops both nationally and locally were quite willing to criticize Trump on immigration: 78% of all criticism sentences, 82% of local-level criticisms, 73% of national-level criticisms addressed immigration. This is congruent with findings from Reese that between January 2019 and July 2020, bishops' conference news releases on public policy "consistently sided with the administration" on the issues of abortion, LGBTQ issues, and religious freedom but often "attacked the administration's policies" on immigration. 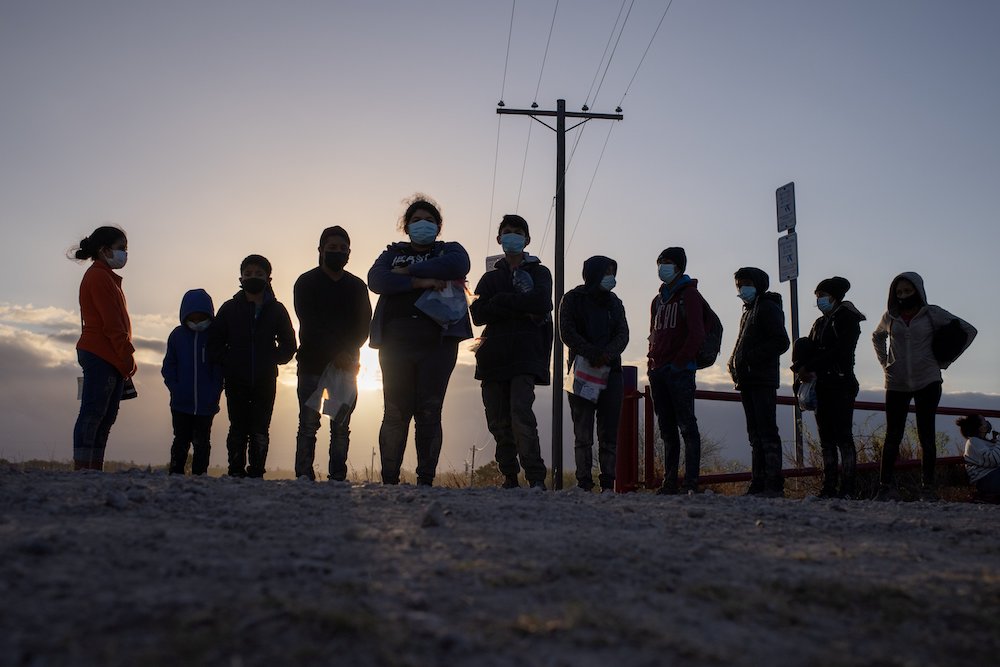 Unaccompanied minors seeking asylum in the U.S., await transport in Penitas, Texas, March 12, 2021, after crossing the Rio Grande. According to Creighton University research, the bishops both nationally and locally were quite willing to criticize President Donald Trump on immigration: 78% of all criticism sentences, 82% of local-level criticisms, 73% of national-level criticisms addressed immigration. (CNS/Reuters/Adrees Latif)

Here again, we believe these findings are rooted in the USCCB's affinity with the Republican Party, in shared priorities and strategies on abortion, sexuality and religious freedom, and buoyed by the influence of politically conservative Catholic individuals, organizations and outlets.

As a Democrat, Biden's positions and strategies on these issues are more likely to contrast with Trump's and align with Obama's. We therefore anticipate the bishops' conference may decrease the use of Trump-era distancing tactics that downplay presidential criticism by omitting the president's name. Instead, we suspect the conference may resume its Obama-era strategy of leveling named criticism and increasingly censure Biden by name.

If this occurs, it is likely to damage the relationship between Biden and the bishops' conference and inhibit collaboration on important issues about which Reese sees potential for collaboration: COVID-19, refugees and immigration, health care expansion and climate change. This criticism would also occur despite the ways Biden's platform will advance core commitments of Catholic social teaching, as Network points out, and potentially "save American Catholicism from the far right" that for decades has tried to, as Michael Sean Winters describes, "baptize" an unholy alliance between Catholicism and neoliberalism.

In the collaborative spirit of Fratelli Tutti and fidelity to the fullness of Catholic social teaching, we hope the U.S. Conference of Catholic Bishops resists the temptation to demonize Biden through relatively excessive named criticism on a narrow set of issues. Instead, we hope they seek common ground to promote the integral common good of all and care for our common home.

[Daniel R. DiLeo, Ph.D., is an assistant professor and director of Creighton's University's Justice and Peace Studies Program. Sabrina Danielsen, Ph.D., is an assistant professor of sociology at Creighton University. Emily E. Burke is a senior at Creighton University with double majors in sociology and justice and society, as well as triple minors in theology, sustainability studies and graphic design. This essay is based on their article "U.S. Catholic Bishops' Discussion of President Obama vs. President Trump, 2014-2019," published in the Journal of Religion and Society, Supplement 23, 2021, Pages 146-167.]

A version of this story appeared in the April 16-29, 2021 print issue under the headline: Predicting how US bishops' conference will treat Biden.