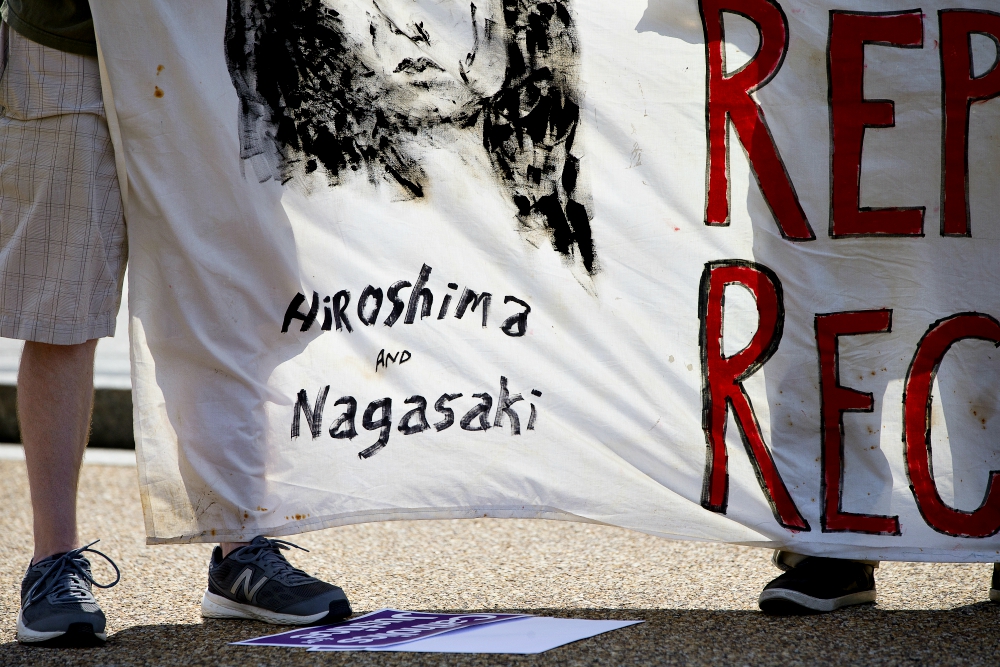 This Aug. 6 and 9 mark the 74th anniversary of the nuclear bombings of Hiroshima and Nagasaki by the United States.

On Aug. 6, 1945, the feast of the Transfiguration, an atomic bomb, made in the United States from highly enriched uranium-235, was dropped on Hiroshima, Japan. Three days later, the U.S. used another nuclear weapon, this one made from plutonium-239, on Nagasaki. More than 200,000 Japanese immediately died in these bombings and many thousands more have suffered and died since from the effects of nuclear radiation.

For 74 years, this mortal sin, which ushered in the Nuclear Age, has yet to be repented for by the U.S.

Thomas Merton, in his "Original Child Bomb," vividly describes the firepower, death and destruction that was unleashed on Hiroshima: "The bomb exploded within 100 feet of the aiming point. The fireball was 18,000 feet across. The temperature at the center of the fireball was 100,000,000 degrees. The people who were near the center became nothing. The whole city was blown to bits and the ruins all caught fire instantly everywhere, burning briskly. 70,000 people were killed right away or died within a few hours. Those who did not die at once suffered great pain. Few of them were soldiers."

The powers that be want us to believe that nuclear weapons had to be used to save American lives and end World War II. This is a fallacy. Realizing that Japan was on the verge of surrender as early as July 13, 1945, Gen. Dwight Eisenhower, along with Adm. William Leahy, head of the Joint Chiefs of Staff, opposed the use of the bomb.

Eisenhower, in The White House Years, wrote, "Japan was already defeated and ... dropping the bomb was completely unnecessary. ... I thought that our country should avoid shocking world opinion by the use of a weapon whose employment was, I thought, no longer mandatory as a measure to save American lives."

In his book Atomic Diplomacy, Gar Alperovitz asserts that nuclear weapons were used against the Japanese primarily for two reasons: First, the U.S. wanted to hasten its victory over Japan without the aid of the Russians, who were about to enter the war; second, and most importantly, President Harry Truman intended to threaten the Russians and warn them not to challenge U.S. plans for organizing the postwar world.

Nuclear weapons were conceived of, built and used under a shroud of secrecy and deception. There has never been a public referendum about whether these weapons should even exist, let alone be used.

The U.S. possesses more than 6,000 nuclear weapons, many of which are on hair trigger alert. U.S. and NATO missile defense systems ring Russia and China, increasing already heightened tensions. A new U.S. Space Force has been proposed to oversee military control and domination of outer space.

Meanwhile, during this past year, the U.S. withdrew from the Iran nuclear deal and the Intermediate-Range Nuclear Forces treaty with Russia. On Feb. 13, the U.S. carried out a subcritical nuclear test, a flagrant violation of the Comprehensive Nuclear Test Ban Treaty and the new U.N. Treaty on the Prohibition of Nuclear Weapons. And Pentagon policymakers have declared that a limited nuclear war could be waged and won, according to a new nuclear doctrine titled "Nuclear Operations."

These actions have further exacerbated the nuclear peril.

With an unpredictable president in office, and the development of a new smaller nuclear warhead, the W76-2, to be deployed this fall, the U.S. will now have the nuclear "flexibility" to wage what is called a limited nuclear war. What Albert Einstein stated after the bomb was first developed holds even truer now: "The unleashed power of the atom has changed everything save our modes of thinking and we thus drift toward unparalleled catastrophe."

This reality of the use of nuclear weapons being "legal" came home to me in a powerful way in 1982 during the Trident Nein Plowshares trial, in which I was a defendant. The Trident Nein action was carried out on July 5, 1982, when nine peacemakers hammered and poured blood on the USS Florida Trident nuclear submarine and components at the General Dynamics Electric Boat Shipyard in Groton, Connecticut. At one point during the trial, an extraordinary exchange with the trial judge took place. He stated that we defendants may very well be right, that the world might be blown up, but the law must still be upheld.

I was astonished by this statement! By implication, the judge was clarifying how the civil law of the United States protects nuclear weapons. Even though the use of such weapons poses an unprecedented peril for our world, the "law's" sanctioning them cannot be questioned. In short, the use of nuclear weapons, which could end the world as we know it, would be technically lawful. 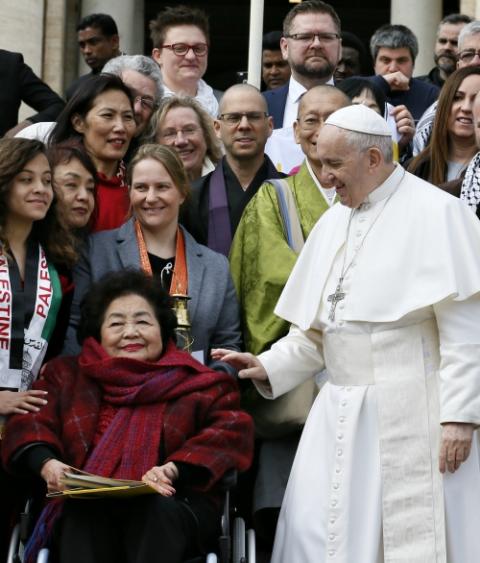 Pope Francis greets Setsuko Thurlow, a survivor of the 1945 atomic bombing in Hiroshima, Japan, during his general audience in St. Peter's Square at the Vatican March 20. (CNS/Paul Haring)

The violence unleashed at Hiroshima set in motion a trajectory of unrelenting violence by the U.S. in the wars of aggression that it has waged over the last seven decades in many countries, claiming untold lives. The anniversary of the U.S. atomic bombing of Hiroshima and Nagasaki is a time of remembering the horror, repenting the sin and reclaiming a future without nuclear weapons. It is a time to recommit ourselves to the work of disarming and dismantling the machinery of mass destruction.

Toward this end, there have been numerous nonviolent disarmament actions worldwide, including some 100 "Plowshares" actions that have taken place since 1980.

On April 4, 2018, the Kings Bay Plowshares carried out the latest Plowshares action at the Kings Bay Naval Base in St. Marys, Georgia. The base is the Navy's Atlantic Ocean port for six Trident submarines that can cause the devastation of 3,600 Hiroshima-scale attacks. On Aug. 7, the seven peacemakers, who face a maximum sentence of 25 years in prison, will appear in U.S. District Court in Brunswick, Georgia, to offer oral arguments regarding why they should be allowed to use the Religious Freedom Restoration Act in their defense.

During this Aug. 6-9 period, there will be numerous events and nonviolent actions globally to remember the victims and to call for nuclear abolition, including in Hiroshima and Nagasaki. In the U.S., acts of nonviolent public witness will occur at many nuclear weapons sites, including at the Kings Bay Naval Base. In the Washington, D.C., area, the Dorothy Day Catholic Worker, along with other co-sponsoring religious groups, will witness at the Pentagon and White House.

And Pope Francis, at a 2017 Vatican conference on nuclear disarmament, declared: "If we also take into account the risk of an accidental detonation as a result of error of any kind, the threat of their use, as well as their very possession, is to be firmly condemned." Earlier that year, Francis told the United Nations that the total elimination of nuclear weapons is "both a challenge and a moral and humanitarian imperative."

[Art Laffin is a member of the Dorothy Day Catholic Worker in Washington, D.C. and editor of Swords Into Plowshares.]