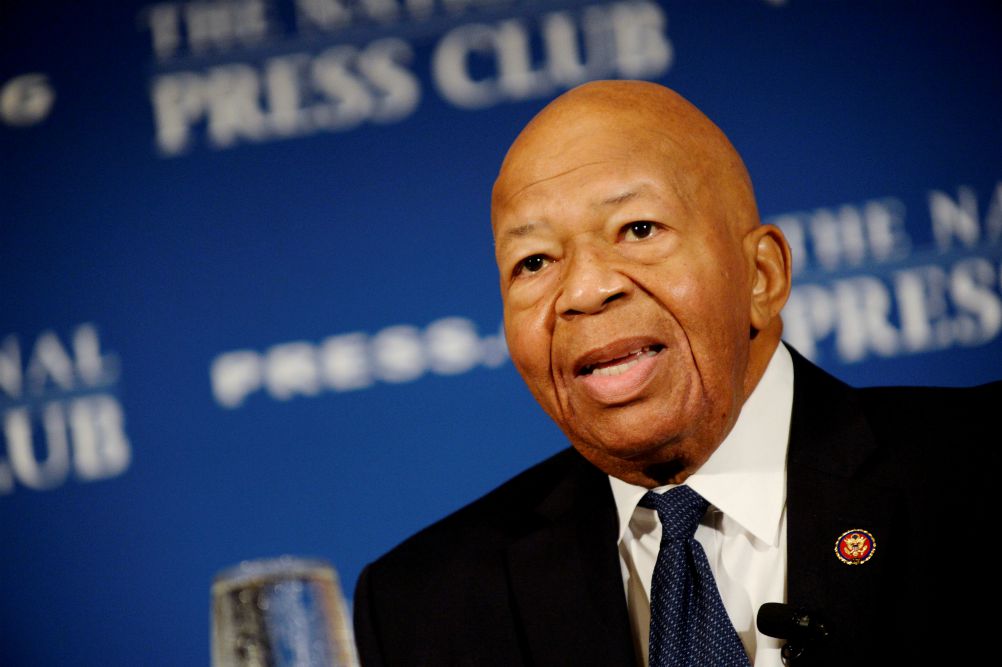 Rep. Elijah Cummings, D-Maryland, is seen at the National Press Club in Washington Aug. 7. He died Oct. 17 at the age of 68. (CNS/Reuters/Mary F. Calvert)

Elijah Cummings, the stalwart U.S. representative who died Oct. 17, had a prophetic luminescence about him. He could sit calmly in Congressional chaos, offering wisdom from beyond the fray. To political friends and foes alike, he looked and acted like a spiritual man though he didn't try to sell himself as such.

Cummings was the child of deeply religious parents (his mother was founder and pastor of Victory Prayer Chapel in Baltimore), and he did go to church, but let whatever convictions he'd gained from prayer speak for themselves without trotting out those credentials. His behavior calls to mind Karl Rahner's "anonymous Christian," whose faith isn't necessarily attached to Christian origins, and Dietrich Bonhoeffer's belief that "religion-less Christianity" offers faith in an increasing secular age by relying more on embodied witness to love and justice than preaching Christian tradition.

My reason for saying that is that it brings up the question of how much an obituary in a major media report should emphasize or do extra reporting on a subject's religious commitment. In the past, the answer was fairly clear cut. If a prominent lay person died, attention was often given to church membership and offices held therein, or to relationship to well-known religious figures in history. Sometimes churches and synagogues were listed as sites of the funeral. In highly unusual cases, some reference to the person's beliefs was included. Only when the subject was obviously a member of the clergy or a professional church official did the death notice focus primarily on religion.

Unless the deceased was obviously tied to religious establishment, therefore, religious identity was kept minimum, a distinction that paid generalized tribute to the separation of church and state. It was also reflective of an earlier time when religion was vastly more influential as a cultural force. The dominance of religious presence meant that in death as well as in ongoing civic affairs, religion was given what was considered its due in the media. Though religious leaders complained about lack of coverage, and were dismayed by the stereotypes in which they and their members were cast, they basically accepted a truce with media. Apart from tacit respect, as it were, "you leave us alone and we'll leave you alone."

In recent decades, the lid has been blown off. The curtain has been lifted on church scandals, political advocacy and the decline of religion as a pillar of personal life. The wall of protection and secrecy is now porous. Religious institutions are fair game on all levels even as religious influence in terms of membership and general adherence to foundational beliefs has rapidly lost ground. Some groups on the religious right have cried "foul" in part because their sanctums have lost the immunity they once had. The counter narrative that media are going out of their way these days to ignore religious news — or misreport it — is gaining momentum. Among the complaints is that stories such as Cummings' death fail to grasp the depth of religious faith that animated him every day.

That's a reasonable assumption, but hard to show in journalistic terms. As a small army of social scientists point out, religion in America overall has become so intensely private, so enmeshed with non-religious values and so ill-defined publicly — with the possible exception of the alliance between many evangelicals and Catholics and President Donald Trump — that it's hard to tell staged religion from real religious actors. It's all but impossible to grasp whether religion reflects its own stated purposes or not, given the enormity of hypocrisy, and where religion actually motivates one's action as opposed to burnishing one's reputation. Lots of wild accusations cloud the climate; liberals categorically charging evangelicals with willfully abandoning selling out their stated beliefs for narrow political, pragmatic gain; conservatives indiscriminately flailing away at liberal "godlessness."

This leaves the reporter and the editor in something like a fog. Claims of religious conviction by groups and individuals do sometimes appear to collide with their actions, increasing confusion, doubt and suspicion. The more religion has retreated into the mysteries of the individual, the more difficult it is to measure consistency. Nothing has generated more of that than the apparent contradictions between the religiosity of Trump supporters who would appear to condone behavior that directly conflicts with their attested religious and Biblical teachings.

Given the mounting cases of this kind of apparent hypocrisy, it is no wonder that journalists balk at taking professed statements of faith at face value. It's also no surprise that the inspiring Elijah Cummings preferred letting his beliefs speak for him rather than going to lengths to use them in an effort to frame his public image.

I'm reminded of Jesus' story of the publican and the sinner (Luke 18:9-14). The publican proclaimed his righteous superiority over others. The other man beat his chest confessing his shortcomings and begging forgiveness. Cummings spoke with a voice animated like that of humble man's, an inner testimony, and, like that man in the parable, didn't seek public recognition of the promises he hoped to fulfill.