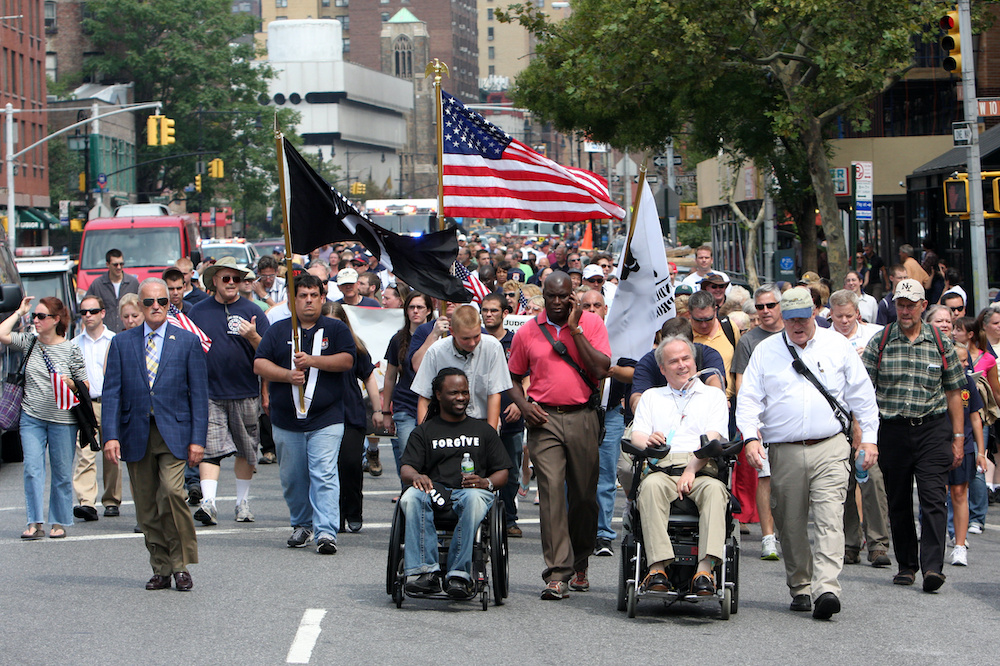 New York police Det. Steven McDonald, in wheelchair at right, participates in the 10th annual Fr. Mychal F. Judge Walk of Remembrance in New York Sept. 4, 2011. The 2.5-mile procession from St. Francis of Assisi Church in midtown Manhattan to the World Trade Center is dedicated to the victims of the Sept. 11, 2001, terrorist attacks and named in honor of the Franciscan priest and New York fire chaplain who was killed in the attacks. McDonald founded the walk in 2002. (CNS/Gregory A. Shemitz)

The Catholic Church may soon name another American saint. In late May, Pope Francis, affirming the verdict of medical and theological experts, credited the Connecticut priest Michael McGivney for the 2015 healing of a pregnant woman. This paves the way for his beatification, tentatively slated for next fall. McGivney, who died in 1890, is best known for founding the Knights of Columbus, the fraternal organization that has sponsored McGivney's cause.

The stories we tell about saints are always the stories we need to hear most at any given time, and one aspect of McGivney's story resonates particularly deeply today: He died in a pandemic reportedly caused by a coronavirus.

Nonetheless, COVID-19 will likely have subsided long before McGivney's enthusiasts celebrate his canonization. His beatification, like all large gatherings, may be indefinitely postponed. Even after it does take place, McGivney will require yet another certified miracle. Once a promising enough one materializes, his promoters will forward its details to Rome, where a commission of doctors must first affirm that the recovery is medically inexplicable. Theologians will then determine whether the cure was indeed effected through the intercession of McGivney alone.

(Pro-tip for miracle-seekers: pray for the intercession of a single holy person. In the early 1960s, the cause for canonization of Elizabeth Ann Seton was delayed because the mother of a miraculously-recovered little girl admitted that she had invoked both Seton and St. Thérèse of Liseiux. As a mother myself, I get the impulse to enlist a heavenly army of intercessors. As a scholar of canonization, though, I know it's imperative to put all your eggs in one saintly basket). 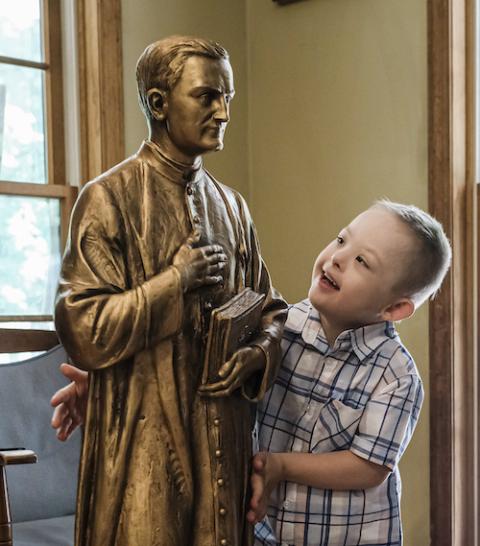 Mikey Schachle, 5, examines a statue of Fr. Michael McGivney at the home where he lives with his parents, Daniel and Michelle, and siblings in Dickson, Tennessee, June 2, 2020. Five years ago, Dan and Michelle Schachle prayed to McGivney, founder of the Knights of Columbus, to intercede with God to save their son, still in his mother's womb, who was given no hope of surviving a life-threatening case of fetal hydrops. (CNS photo/Tennessee Register/Rick Musacchio)

However far away McGivney's canonization may be, this recent development has made the story of American sanctity even more interesting. "Firsts" matter a great deal in saint-seeking; see, for example, the exuberant celebrations that accompanied Seton's eventual canonization in 1975 as the first American-born saint, or those that surrounded Frances Cabrini three decades previously, when she became the first U.S. citizen so honored.

McGivney's elevation is poised to mark two important "firsts" among U.S. saints: He would become both the first native-born male and the first Irish American. That a canonized saint has yet to emerge from two of the most powerful constituencies in U.S. Catholicism testifies to one of canonizations many quirks, the ability of this most ecclesial of processes to upend its own power dynamics.

There is no question we are living in a moment when structures of institutional power need serious realignment. In this moment of deep unrest in the church and nation, Catholics should go deep inside the waiting room of prospective saints and ask ourselves, as Americans and as believers, who and what is truly heroic, and how shall we reframe our understanding of sanctity to create a better world?

A partial answer recently emerged in the debacle over the case of Fulton Sheen, a former front runner in the race for both the first Irish American saint and the first native-born U.S. male one. Ordained a priest in Peoria in 1919, Sheen became a renowned radio and television personality and also served as Bishop of Rochester, New York, from 1966 to 1969. A tussle over Sheen's remains, interred in New York's St. Patrick's Cathedral since his death in 1979, stalled his cause for canonization for years, as New York's Cardinal Timothy Dolan, citing Sheen's own preferences, refused to grant permission for them to be relocated to Peoria, as the bishop of that diocese wished.

Battles over bodies are routine in the history of sainthood. One of Dolan's predecessors, Cardinal Francis Spellman, tried to exhume Seton's remains from their resting place in Maryland and re-inter them in southern Manhattan, where she had once lived and where Spellman could more readily bask in her reflected glory. After Seton's Daughters of Charity foiled the cardinal by securing a guarantee from Rome that Seton could remain where she was, he concentrated on ensuring that Seton would leapfrog Philadelphia's Bishop John Neumann to the honors of the altar. Incidentally, Sheen lent his support to Team Neumann, perhaps for no other reason than to spite Spellman, his perpetual nemesis.

In a dramatic turn, it is now Sheen's stint as Rochester's bishop that has stalled his cause for canonization, perhaps permanently. After the body question was settled by protracted legal proceedings (he's back in his home town after all), Sheen's beatification was scheduled for last December. Preparations for an elaborate celebration in Peoria were in place when the Vatican abruptly cancelled the event, reportedly because of concerns that Sheen's name might surface in a state attorney general's investigation into clerical sexual abuse in New York.

Whether or not there are specific allegations that Sheen covered up abuse is unknown and largely beside the point. Allowing Sheen's cause to languish would be a tacit admission of a horrific truth many Catholics are just beginning to grasp. Levels of complicity surely vary, but no man who has held high office in the Catholic church over the last half century should be presumed to be blameless in this ongoing crisis. None of them are the models of heroic virtue we need today.

Left: Franciscan Fr. Mychal Judge, a chaplain with the New York Fire Department, is pictured in 1992 wearing his helmet and bunker coat. (CNS/Courtesy Holy Name Province Franciscans); Right: A photo of Judge is seen July 7, 2015, on a beam from the World Trade Center at the 9/11 Memorial and Museum in New York City. Judge died while giving last rites to a firefighter in the aftermath of the 9/11 terrorist attacks that brought down the twin towers of the World Trade Center. (CNS/Bob Roller)

Should Michael McGivney, a humble parish priest, become the first native-born Irish American male saint? Maybe. But U.S. Catholics might be more inclined to rally behind another St. Mychal.

Many already regard Mychal Judge, a Franciscan chaplain to New York City firefighters who died on September 11, 2001, as an unofficial saint. Judge's reputation for holiness had been established through his ministry to AIDS victims throughout the deadliest years of that plague, and putting him on a path to official sainthood now would inspire us to respond with compassion and courage to the current pandemic.

But what makes Mychal an even more relevant saint for our times is his openness about his own homosexuality. Canonizing this people's saint would compel the Catholic Church to be more welcoming to LGBT Catholics. More powerfully, it would help to shatter the strict code of silence surrounding all things sexual that exacerbated clerical abuse and its cover-up. No vaccine exists for this scourge. The only hope of a cure lies in radical reform, atonement, and telling the truth.

St. Mychal Judge, pray for us.

[Kathleen Sprows Cummings is director of the Cushwa Center for the Study of American Catholicism, professor of American studies and history at the University of Notre Dame and author of A Saint of Our Own: How the Quest for a Holy Hero Helped Catholics Become American.]