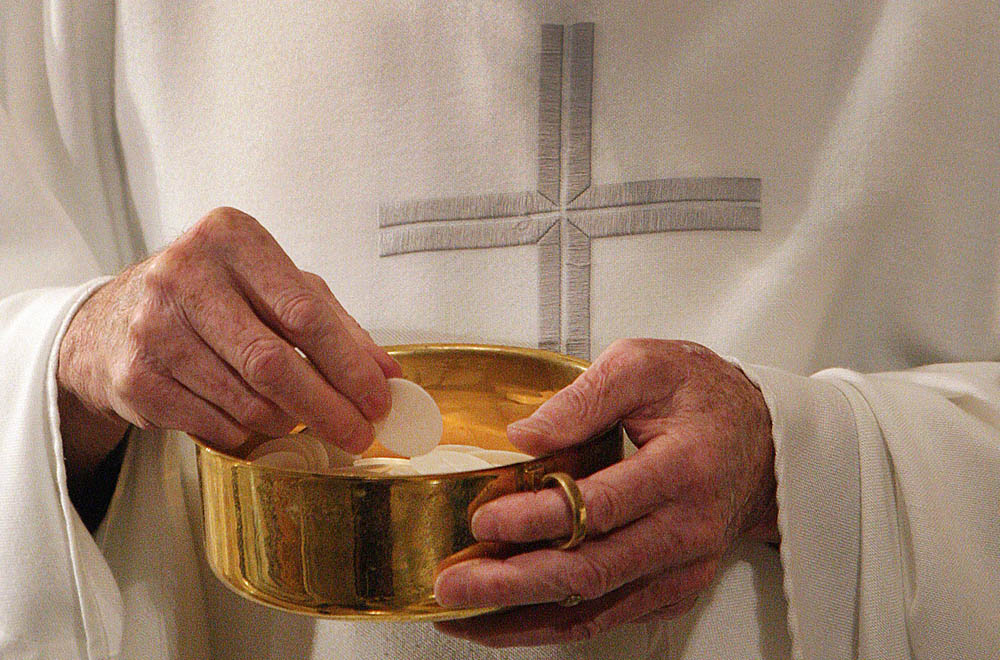 A priest prepares to distribute Communion during Mass in Washington. By receiving the Eucharist at Mass, Christians are given Christ's same spirit and a taste of eternal life, Pope Francis said Aug. 19, 2018, during the Angelus. (CNS/Bob Roller)

At a recent meeting of the pastoral council of the Paulist Center in Boston, we wondered how our church community could be helpful to people struggling to stay Catholic.

Someone suggested we look for a Meetup.com group of people in that circumstance. Finding none, we started one: Boston Area Catholics Struggling to Stay Catholic.

We've met twice now — 14 of us in December and 18 of us earlier this month — and plan to go on meeting as long as we find the gatherings useful. Most helpful to me has been hearing the strategies others are using to reconcile their attachment to the church with their deep differences with much of its leadership.

As interested as I've been in the recent run of stories of those who have decided to leave the church — or stick with it — I was surprised to discover how enlightening it could be to switch the paradigm: Instead of turning over the reasons for staying or going, we could explore the how of remaining Catholic.

At the most recent meeting, someone recalled the dual role for Catholics proposed by the Irish priest, Diarmuid O'Murchu: hospice worker and midwife.

Having been bedside for both the birth and death of loved ones, I found the analogy daunting. Hospice workers must steel themselves to impending death without sacrificing the extraordinary care and compassion required when time draws short. Midwives have always struck me as especially courageous, stepping in to assist at one of life's most frightening, painful and joyous moments.

The unusual combination of roles seems to fit those of us enmeshed in a church in obvious decline at the same time we're hoping to create something new and sustainable.

Someone else at the meeting mentioned the inspiration they draw from Catholics like Dorothy Day and Jesuit Fr. Daniel Berrigan, prophets whose witness often conflicted sharply with the practices of the institutional church if not its teachings. And then it hit me! Living the way they did, standing for what they did, was exactly how they stayed Catholic.

Undergirding much of the discussion was a resolve to be heard — heard without regard to lay or clerical status — in decisions shaping the life of the church.

Last week, the president of the Paulist Fathers held a listening session at the center to discuss the order's handling of issues involving clergy misconduct. Some time into the session, Hillary Doolittle, a member of the center's young adult group, offered a suggestion aimed at improving Paulist decision-making. Pointing out that the order's leadership group is made up of three ordained men, she suggested adding a layperson.

Such a move would require amending the order's constitution, not to mention Vatican approval. Who knows whether it will even make it past the idea stage?

Nonetheless, I drew energy from Hillary's common sense suggestion. The response — wherever it falls along the scale from silence to adoption — will tell us something about where the church is headed.

I had a similar reaction to the remarkable essay, "Gay Priests and the Lives They No Longer Want to Hide," that Andrew Sullivan published in New York Magazine this month. He proposes a next step for the church as stunning in its simplicity as it is in its wisdom: Encourage gay priests to come out of the closet and support them when they do.

That Rome is unlikely to go along anytime soon does not diminish the power of such words to foreshadow a Catholic church that, one way or another, will one day be born.

Perhaps the most unusual strategy to emerge from our Struggling Catholics meeting was the idea of "a Catholic who goes to church in another building."

The idea — Catholics who continue to identify as such while attending other Christian churches — struck me as a coping mechanism that may turn out to be an increasingly important option for those of us seeking how to stay Catholic.

The idea reminded me of my friend Joe Radelet, a former seminarian and one of the most committed Catholics I know. These days, Joe and his wife, Sharon, are active participants in services "patterned on the Catholic Mass, yet often draw(ing) from other religious traditions" at Living Beatitudes Community in Dayton. "Women and men," the church declares on its website, "play equal roles in all aspects of our services, which include weddings, funerals, and anointing of the sick."

Maybe someday, with the help of hospice workers and midwives like Hillary and Andrew and Joe and Sharon, Catholic churches will be able to make the same claim.

[Bill Mitchell is a former NCR board member who serves on the pastoral council of the Paulist Center in Boston. He can be reached at bmitch@gmail.com.]