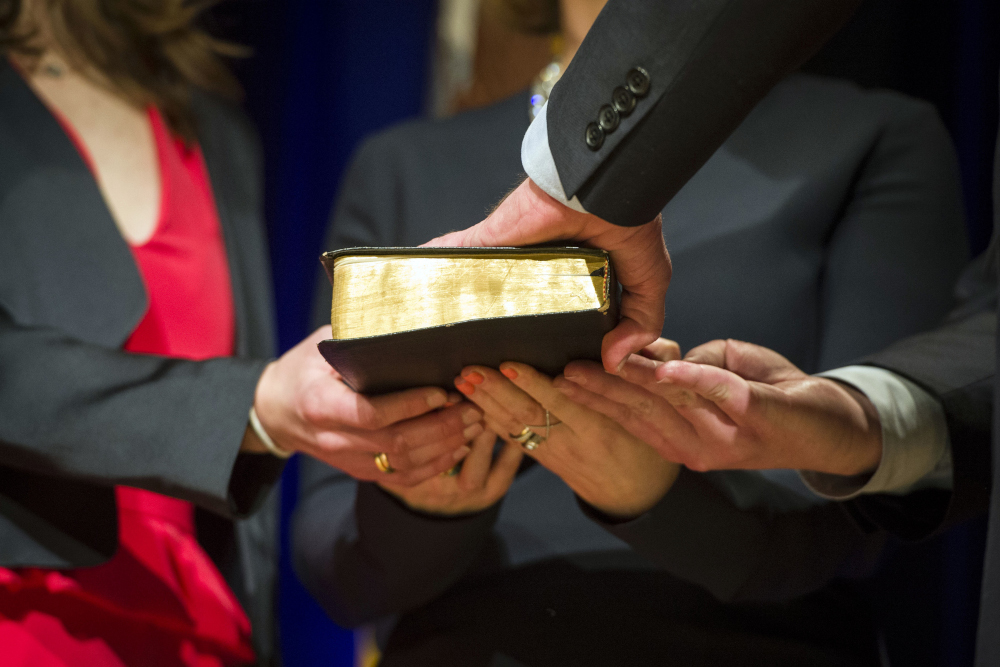 A hand on a Bible to take an oath. (Petty Officer 2nd Class Sean Hurt/DoD)

Some Democrats in Congress who now make the rules in the House of Representatives have proposed dropping "so help me God" from the oath recited before someone testifies before a legislative committee.

Those arguing in favor of dropping "so help me God" assert that it is improperly imposing religious beliefs and practices on atheists.

"I think God belongs in religious institutions: in temple, in church, in cathedral, in mosque — but not in Congress," said Representative Steve Cohen of Tennessee, according to The New York Times. Cohen is the chairman of the Judiciary Committee's Subcommittee on the Constitution, Civil Rights and Civil Liberties.

Or as House Judiciary Committee Chairman Jerrold Nadler put it, "We do not have religious tests."

It doesn't seem to be a high priority, and even those like Nadler who have spoken out about the oath don't seem to have firm views. At a February hearing, Nadler dropped the phrase when swearing in witnesses, but when Republican Rep. Mike Johnson made a point of order, Nadler apologized and redid the oath including the phrase.

Ridding our courts and legislatures of this so-called religious test may be harder in some places than others. Earlier this year, the Massachusetts Legislature's Joint Committee on the Judiciary proposed removing God from the oath of office for state officials. This will not be easy because it is in the state's constitution.

Politically, the Democrats are also laying themselves open to charges that they are a godless party.

Those who rose to defend Nadler and Cohen's notion pointed out that the phrase doesn't appear in the Constitution. Rep. Debbie Dingell, a Catholic who supports keeping the phrase, merely complained that Republicans are using the issue to divert attention from issues like health care.

But there's some sense to allowing people to drop the phrase. When our country was founded, it was made up mostly of Christians and other believers. There were some deists but few atheists.

Today we live in a pluralistic country with a wide variety of beliefs and numerous unbelievers. Christians still make up the vast majority of the population (70 percent), but non-Christians are now 6 percent. Another 7 percent are atheists or agnostics, according to the Pew Research Center.

Believers need to respect and make accommodations for those citizens who are not believers. We have an obligation to respect their freedom not to believe just as they must respect our freedom to believe. This is what religious freedom is all about.

This can be easily done.

For example, why not let the person pronouncing the oath decide whether he or she wants to include "so help me God"? Let the state be neutral and respect the beliefs of its citizens. The believer can say "so help me God," and the nonbeliever can drop it. Both oaths are legally binding.

Let's avoid adding more fuel to the culture wars. God should not be a political football.