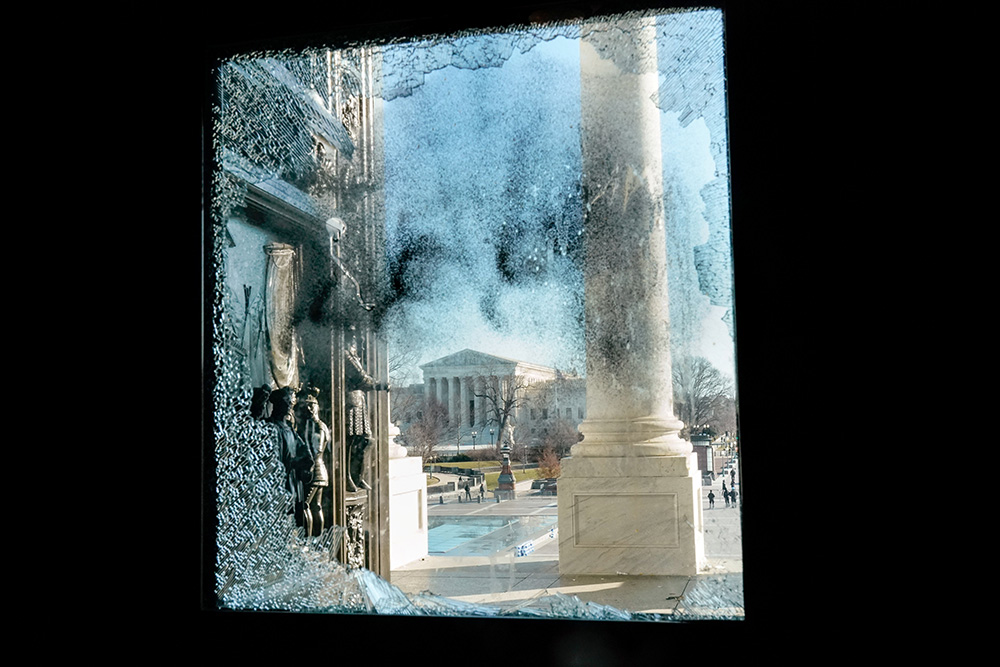 The U.S. Supreme Court is seen through a smashed glass door at the U.S. Capitol in Washington Jan. 7, one day after supporters of President Donald Trump stormed Capitol Hill. (CNS/Reuters/Erin Scott)

I found it frighteningly normal, sitting on a sun-drenched Thursday morning in January sipping coffee. Just a few miles away, the day before, a violent mob, incited by a delusional if not entirely deranged sitting president, had stormed the U.S. Capitol, occupied the Senate and House chambers, looted offices, all the while screaming their wish to do violence to, even lynch, elected officials. Their intent was clear — to disrupt a constitutionally mandated act in the nonviolent transfer of power.

Frighteningly normal it was because the fear surfaced quickly that this would be but another in the stream of outrages that have become as unremarkable a part of our politics as once were sane and reality-based press conferences. Is this the way it happens? Is it — searching for some image that might explain it all — a gradual erosion until the cave-in occurs? But would people of sound mind actually stand around a sinkhole for four years waiting to be swallowed up?

The frog in the gradually warming pot doesn't work as analog either because science (for those of us who have not yet totally dismissed the discipline) tells us that, no, the frog actually wouldn't just hang around stupidly until boiled. The frog would jump the hell out of the pot.

I sip my coffee, watching the sun slants, sliced by the blinds, move, as they daily do, across the living room. In so many ways, just another day.

The question persists: What now?

The anxiety that accompanied that nagging thought began to recede as the media outlets that had not engaged in the presidential delusion for the past four years began to use the terms that applied: sedition, insurrection, violent overthrow. This time, the outrage was sufficient enough that the words, correctly applied to a reality that the world had seen and could verify, had some purchase. The divisive president had ultimately succeeded in bringing the Congress together. Republicans and Democrats, members of the House and Senate, were equally placed in jeopardy, lives threatened, offices and chambers invaded. President Donald Trump, totally unmoored, had finally, perhaps, gone too far and kicked the tripwire that would blow up his latest fraudulent enterprise. 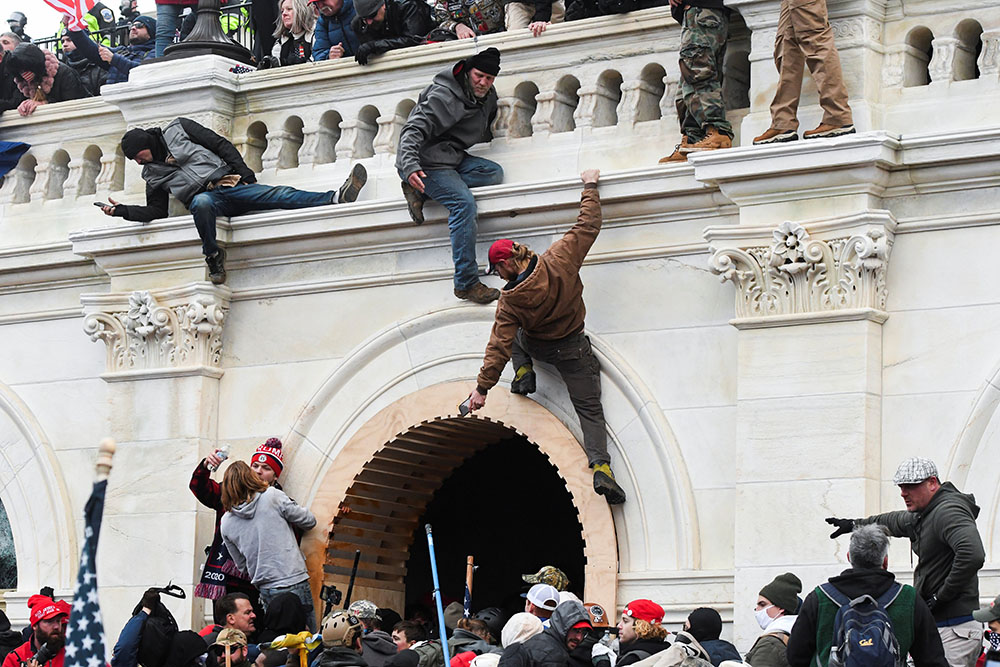 What consequences will emerge from the carnage that Trump once imagined and finally created is yet to be determined. But it was consoling, for a moment, to think that in less than two weeks the unhinged, incompetent and absurdly self-indulgent would be replaced by competence and intelligence, even compassion, and, above all, regard for democratic norms that had become tattered.

There was further consolation for me, given the landscape that I've spent most of my professional decades covering and trying to understand, in knowing that President-elect Joe Biden would be the closest we'd ever get to a Catholic president who was a traditional member of the community. Hokey at times? Yes. Deficient in some respects? Certainly. But in mannerism, lore and faith formed amid suffering as thoroughly one of us as anyone holding public office.

Yet it is the man who had just incited an attempt at violent overthrow of government who has the benefit of episcopal approval. Trump was the one who told his seditious mob as it was mid-melee — as its members dragged a Confederate flag across Statuary Hall and displayed T-shirts emblazoned with unspeakably vile racist and anti-Semitic slogans — that he loved them. Trump was the one for whom 50% of Catholics who went to the polls spent their vote. He was their pro-life guy, a "great gentleman" and "a great friend of mine," said New York's archbishop, Cardinal Timothy Dolan.

The president in waiting? The bishops in November decided to form a special committee to decide how to deal with him.

Randall Balmer, one of the most astute observers of religion in America, at that moment weeks ago fashioned the question so many of us were asking ourselves: "In what moral universe does Joe Biden, devout Roman Catholic, public servant and family man, present the bishops with difficulties and complexities while Trump gets a pass?"

It occurs in the crimped and distorted moral universe, created by the U.S. hierarchy over decades, that is more a peculiar American construct of Catholic Christianity than it is a reflection of the Gospel or anything coming from Rome.

Abortion. It is the issue that has terminally deformed the approach of U.S. Catholics to politics and was a large reason for the warm embrace of Trump in some Catholic quarters and the reason Biden draws special episcopal scrutiny. 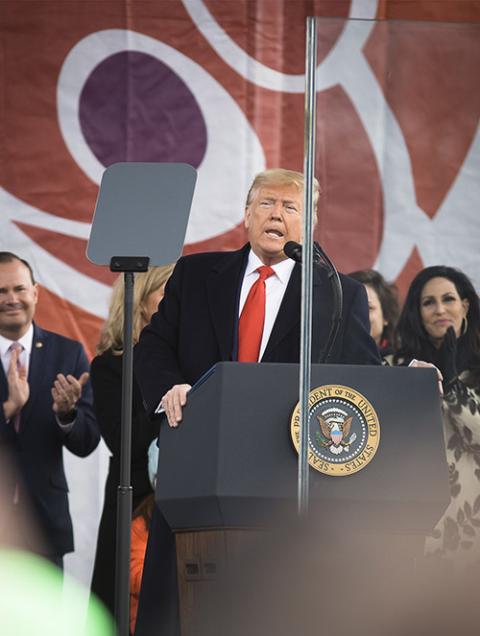 On NCR's pages, the primary concern has never been with church teaching. The ringing and consistent objection this publication has voiced is with how the episcopacy has used abortion as a cudgel, allowing it to suppress all other political considerations and turn all of our public discussion into strategy sessions about a culture war waged over a single issue.

I've watched this distortion metastasize for nearly half a century. By dint of occupation and former station at NCR, I had the privilege of private conversations with bishops who would willingly divulge that they knew the national bishops' conference was painting the church into a tight corner, often with unsavory actors whose only claim on the Catholic vote was the promise of "pro-life" voting. Over decades, most of those politicians rarely, if ever, had to back up the promise.

The bishops, like those in the Trump White House who know something is seriously amiss but fear to name it in public, would never go on the record. But it was their insights and privately held views that allowed us in these pages to write with confidence about the distortions in play.

Among those distortions emerged an American Catholicism that was able to suppress all other matters beneath the primacy of the fight over abortion, the lone "nonnegotiable" in politics, where the coin of the realm is compromise. It was an expression of rigorist Catholicity that wants to apply moral absolutes rarely observed in the Catholic community to elected officials. It was not the example of popes, who publicly distributed the Eucharist to high profile pro-choice politicians, who never made mention of it in their visits to the United States.

War and preparations for war? Death penalty applied in a manner unique in the developed world? A gun culture unrestrained even after kids are slaughtered? Racism? Xenophobia? The gospel of extreme libertarianism and unrestrained capitalism invading our Catholic universities? Yes, yes, all legitimate concerns but all subjected to "prudential judgment," the ecclesial version of a "get out of jail free" card. It's OK, bishop, cardinal, you may have some objection to the content of our conference, but remember, we're "pro-life" all the way.

The payoff? What we've come to accept as frighteningly normal.

As documented repeatedly on these pages, the bishops' approach has had little success in persuading any of the unconvinced to their cause since the Roe v. Wade Supreme Court decision in 1973. In 2019, support for legalized abortion was as high as it was at any time during two decades of polling.

Polls have consistently shown that a majority of Americans, who lie somewhere between the extremes, would tolerate moderation to the Roe decision. There's no space, however, for such a consideration, no space for compromise. The bishops are among the loudest who have demanded a zero-sum approach.

What they've managed to do, instead, is provide job security for those on the extremes in a culture war without end. Scan the tax forms required of nonprofit organizations, of the principal agencies of the culture war, as I have recently, and you'll understand the stakes on both sides.

If Roe were to be overturned next week, the war would splinter into a 50-front battle at the state level with the need for even more funds, more consultants, more advertising firms, more pollsters and more lobbyists. The abortion war industries would be the only ones celebrating. Our politics would become only more contorted and deformed.

Trump was the bishops' big wager in a history of gambles that cost a great deal in political capital and yielded little in results. Like a gambling addict incapable of turning away from the blackjack table, the bishops couldn't resist one more enormous bet, the chance to win it all, to place all they had on this unstable gadfly whose propensity to smash democratic norms just might yield the Supreme Court they desired.

The bishops remind me collectively (and, yes, there are exceptions, but they are a tiny minority) of the character of Thomas More's son-in-law Roper in the play "A Man for All Seasons." Roper is single-mindedly determined to find his way to what he knows is right, the laws of the land be damned. He would, he says, "cut down every law in England" to get at the devil he targets.

"Oh?" responds More. "And when the last law was down, and the Devil turned round on you where would you hide, Roper, the laws all being flat? This country's planted thick with laws from coast to coast — Man's laws, not God's — and if you cut them down — and you're just the man to do it — d'you really think you could stand upright in the winds that would blow then? Yes, I'd give the Devil benefit of law, for my own safety's sake."

It is long past time that our religious leaders do something boldly out of the normal and deliver a difficult truth to those who may still think that Trump was a bet worth taking. They need to do all they can to convince Catholics that the bet was a mistake, that Trump is no savior of the unborn but rather a real and present danger to the country. The only path back to some moral standing in the wider culture is to recognize that the hierarchy's long descent into vicious partisan politics has come to a tragic end.