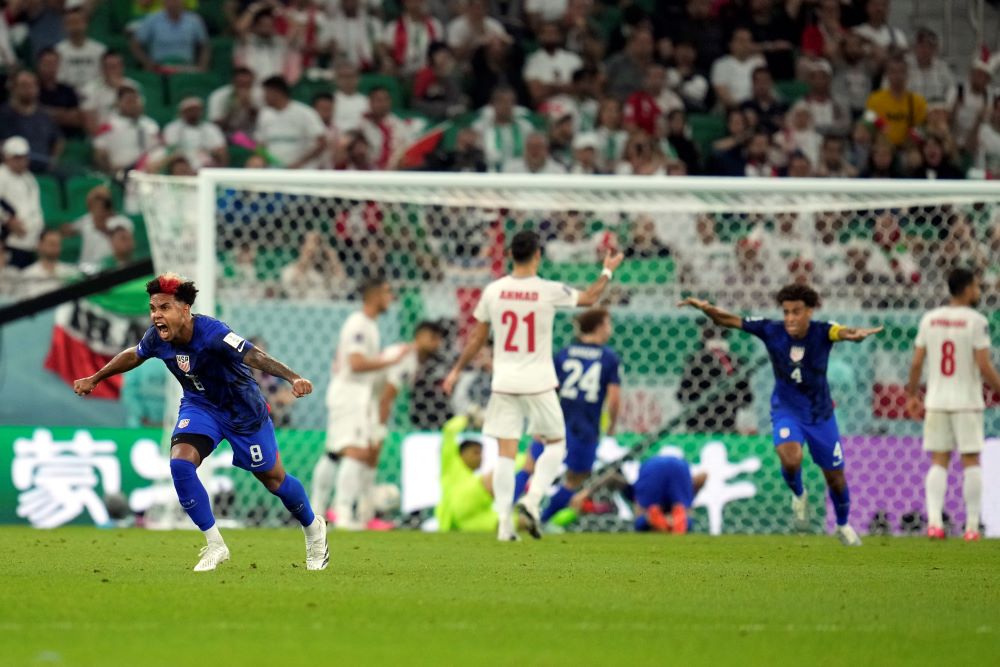 The goal that propelled the U.S. men's national soccer team past Iran into the knockout stage of the World Cup started with a lofted pass from midfielder Weston McKennie to Sergiño Dest on the right side of the penalty box. Dest, who was born in the Netherlands to a Surinamese American father from Brooklyn and a Dutch mother, headed the pass in front of the goal toward Christian Pulisic.

Nicknamed "Captain America" and arguably the best American player of all time, Pulisic is a dual citizen of the U.S. and his grandfather's native Croatia. In the U.S.'s first game of the tournament, against Wales on Nov. 21, Pulisic had earned an assist on a beautiful feed to teammate Timothy Weah, who used the outside of his right foot to knock the ball past the goalkeeper.

Weah's father, George Weah, was a legendary soccer player in his own time and today is the president of Liberia. Timothy's mother, Clar Weah, the first lady of Liberia and a prominent philanthropist and humanitarian, is Jamaican. Weah's goal contributed to a 1-1 draw, and, after a scoreless tie against England, the U.S. needed a win against Iran to advance. A draw or loss would've sent the Americans home.

In that do-or-die moment on Nov. 29, as Dest's header floated toward the goal, Pulisic cut in between to Iranian defenders, buried the ball in the net and immediately collided with the keeper. It was a gutsy play that ultimately sent Pulisic to the hospital with a pelvic contusion.

The goal represented the best of this youthful, scrappy and fearless American team. With an average age of 24 years, 321 days, the United States' starting lineup in the Iran game was the youngest featured across the tournament so far. They are a sign of hope for a brighter men's soccer future here. (Our historically dominant women's side, of course, is in no need of such improvement.)

Beyond sports, both Pulisic's and Weah's goals reflect the best of America: a country that has the capacity to welcome newcomers from all over the world and believes there is strength in diversity. Yet we betray those ideals so often it might be naive to mention them at all. Just think of how the governors of Texas and Florida have been attempting to score political points by sending bus and plane loads of newly arriving migrants to places like Washington, D.C., and Martha's Vineyard. Or the wealth, educational and health care disparities between white people and people of color in the U.S. There is a gaping chasm between "the country as it is" and "the country as it should be."

This year’s men's soccer team is a reminder of who we ought to be. Beyond Dest, Pulisic and Weah, the roster includes sons of places like Central America, Ghana, Japan and Colombia – all donning the stars and stripes. Many of these players were eligible to suit up for other countries instead of the U.S. at the start of their international careers, but made the irreversible choice to declare for the American side for a variety of reasons, including easier paths to playing time. They were all recruited heavily by American soccer leadership. This isn't a straightforward, idealistic Neil Diamond-style "They’re coming to America!” tale. But the roster still reflects the American story: It doesn't matter what blood you have or where you were born. If you want to be an American, you can be.

Of course, migration options have always been comparatively easy for the elite. I can't imagine how much money and how many lawyers were deployed to make some of these players’ immigration-related experiences as frictionless as possible. The message they heard from U.S. soccer was "we want you here, whatever it takes."

This is not the message most migrants arriving at our southern border are receive, at least not from government authorities. Though I am moved by the heroic work of faith-based organizations at the U.S.-Mexico border like the Kino Border Initiative and the Catholic Charities of the Rio Grande Valley, led by Sr. Norma Pimentel, which welcome thousands of migrants a year. These groups and others like them honor the dignity of every immigrant, no matter how fast they can run or how far they can kick a soccer ball. Their witness counters the nativist voices so common in politics and cable news today.

I hope some of the people who have arrived in the U.S. recently have enjoyed seeing fellow immigrants and second-generation kids leading the American soccer team so well. And I hope the team's diversity encourages those of us who have lived here longer to advocate for an immigration system that treats each and every person who seeks a better life here as if they were the biggest soccer stars on earth.