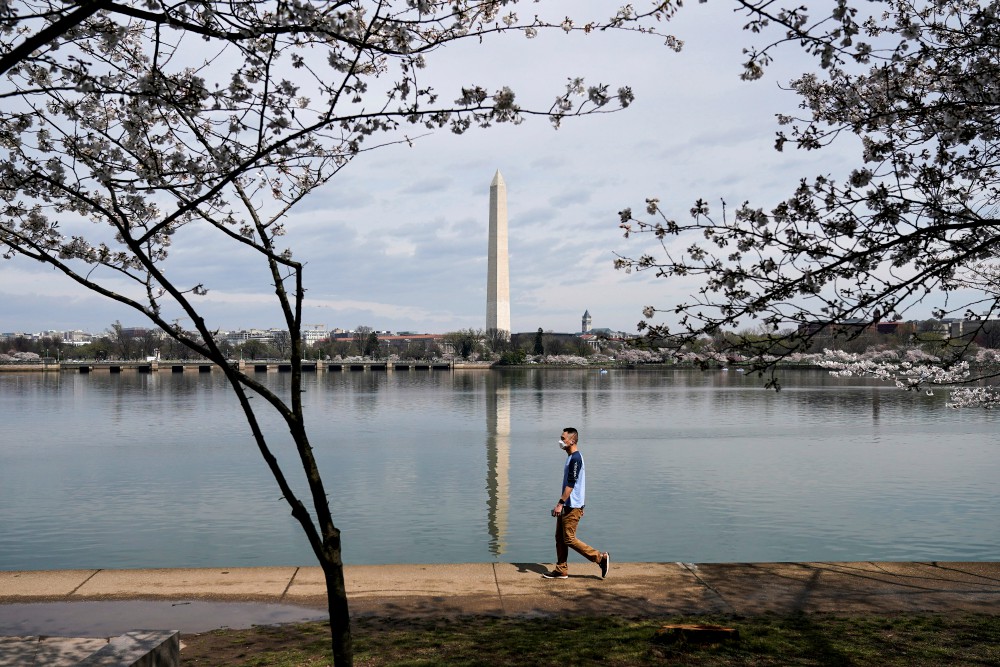 A man in Washington wears a face mask during the outbreak of coronavirus March 19. (CNS/Reuters/Joshua Roberts)

Before everyone woke up to a pandemic inconveniently knocking at our doors, Christians went about the routine business of entering a liturgical season defined by suffering and sacrifice. We contemplated death with ashy foreheads. Read about Jesus social distancing in a desert. Grumpily girded ourselves for small acts of self-denial.

I'm now thinking more tangibly about sacrifice, isolation, loneliness and death in ways that I surely need and undoubtedly resent. Instead of contemplating big questions, I would rather just be at a bar watching March Madness. But such is life today, as we're forced to stumble through this sudden uncertainty together — all at a healthy distance.

On long walks through the city to fight the boredom and clear my head, I pass shuttered bars, darkened movie theaters, locked churches. So many of the places where we find meaning and escape, solace and connection, are closed indefinitely. Lent lasts 40 days. There is no timeline for a pandemic. Is this the new normal? I don't allow my mind to linger on that possibility and keep walking. Washington is a beautiful city in the spring. The tulips and cherry blossoms, wide avenues and elegant parks — even the blissfully ignorant birds singing in the shadow of coronavirus — are all lifelines of normalcy in surreal days.

On a park bench surrounded by trees on a bright afternoon, I open a book. The author quotes from David Wagoner's poem "Lost."

Stand still. The trees ahead and bushes beside you
Are not lost. Wherever you are is called Here,
And you must treat it as a powerful stranger.

Learn from the things that are already in the place where you wish you were not.

None of us want to be in this place. News reports about projection models for likely deaths and overwhelmed hospitals challenge our capacity to process grim realities. The prospect of long-term social isolation weighs on us as a heavy burden. Despite online connections and having the world at our fingertips on a smartphone, we live in an atomized, individualistic culture where so many of us are lonely already. What the experts call "deaths of despair" — from suicide, alcoholism and drug overdoses — are already a crisis. All of this will be inflamed by the coronavirus. So what do we learn from this place where we don't want to be?

There are personal and societal lessons that seem necessary. Browsing in a bookstore, meeting a friend for happy hour or going to a movie used to be activities that I took for granted. Now that these possibilities are restricted, I'm reminded that deep joy and human connection are found in seemingly routine encounters. While marriages, divorces, births and deaths are seismic events that impact us, it's the ordinary moments strung together over time that make up a life.

I want to better appreciate how extraordinary, even sacred, the ordinary can be. Dinner with a friend, hugging my kids, the collective buzz of live music, or even the small pleasure of sipping coffee in a café surrounded by the familiarity of strangers are not things to take for granted when you're reminded that life is fragile and fleeting. Gratitude is a grace.

If people could survive wartime London with bombs falling on the city without Netflix, Amazon and Uber Eats, I'm in no place to complain.

I'm also learning, begrudgingly, to appreciate the gift of boredom. When time slows down and I allow myself to put down the phone, my distracted, anxious brain begins to unwind. I can hear myself again. This is terrifying and liberating. I'm also helped by the perspective of history. The sacrifices I'm expected to make now are minimal. If people could survive wartime London with bombs falling on the city without Netflix, Amazon and Uber Eats, I'm in no place to complain.

This crisis should also provoke a long-overdue conversation about how radical individualism and unfettered capitalism are literally killing us. You don't have to be a socialist to recognize that an economy structured solely around maximizing profits is immoral, unsustainable and, as we see with greater clarity, a threat to public health. McDonald's and many other big retail stores are still failing to provide paid sick leave to employees even at a time when that reckless decision could have life-and-death consequences.

"If I caught the coronavirus, would you want me making your next meal?" asks Fran Marion, a shift leader at McDonald's in Kansas City, Missouri. Yet a company that earned $5.3 billion last year doesn't guarantee paid sick leave for all of its workers and lobbied against parts of legislation to expand sick leave during the coronavirus pandemic, The New York Times reports.

While low-wage workers are forced to choose between their own health, public health and their economic survival, the guardians of the status quo continue to game the system. After reassuring the public that the government was prepared to fight coronavirus, the chair of the Senate Intelligence Committee, Sen. Richard Burr, sold up to $1.7 million in stocks after receiving classified briefings, according to an investigation from ProPublica. A week after Burr's sales, the stock market began a sharp decline and has lost about 30% since. The unfair choice facing that McDonald's employee and the option that senator benefited from are emblematic of a deeper societal disfigurement.

The extreme individualism, materialism and libertarian contempt for the common good that shape our culture and politics come with a cost. Growing inequality, frayed civic bonds and decades of anti-government ideology leave us unprepared for collective action. This is not a news flash. These trends have been clear for decades. But the scale and urgency of the current crisis we face should spur a renewed commitment to a different political and civic vision.

The phrase "We're all in this together" can be overused to the point of cliché, but that doesn't diminish its simple truth. Viruses don't care about border walls or "America First" chest-thumping. We live in a global, interconnected world, which brings tremendous opportunities and risks. The global religion of corporate capitalism blesses us with an abundance of products that make our lives easier. But we've blindly worshiped the market at our own collective peril.

"Behind all this pain, death and destruction there is the stench of what Basil of Caesarea ... called 'the dung of the devil,' " Pope Francis said in a 2015 speech excoriating the profits-only mentality of modern capitalism. "An unfettered pursuit of money rules. ... The service of the common good is left behind. Once capital becomes an idol and guides people's decisions, once greed for money presides over the entire socioeconomic system, it ruins society."

Public health and other common goods that we share must be prioritized. It's a moral scandal that the United States is the only developed nation in the world without guaranteed paid family leave for workers who need to care for a newborn, a sick spouse or a dying parent. More than 40 million Americans don't have even a single paid sick day.

If we can use this crisis as an opportunity to make personal and societal changes, when the darkest days are behind us, we can have at least some hope that the future won't be defined by the mistakes of our past.

This story appears in the Coronavirus feature series. View the full series.
A version of this story appeared in the April 17-30, 2020 print issue under the headline: What do we learn from this place where we don't want to be?.