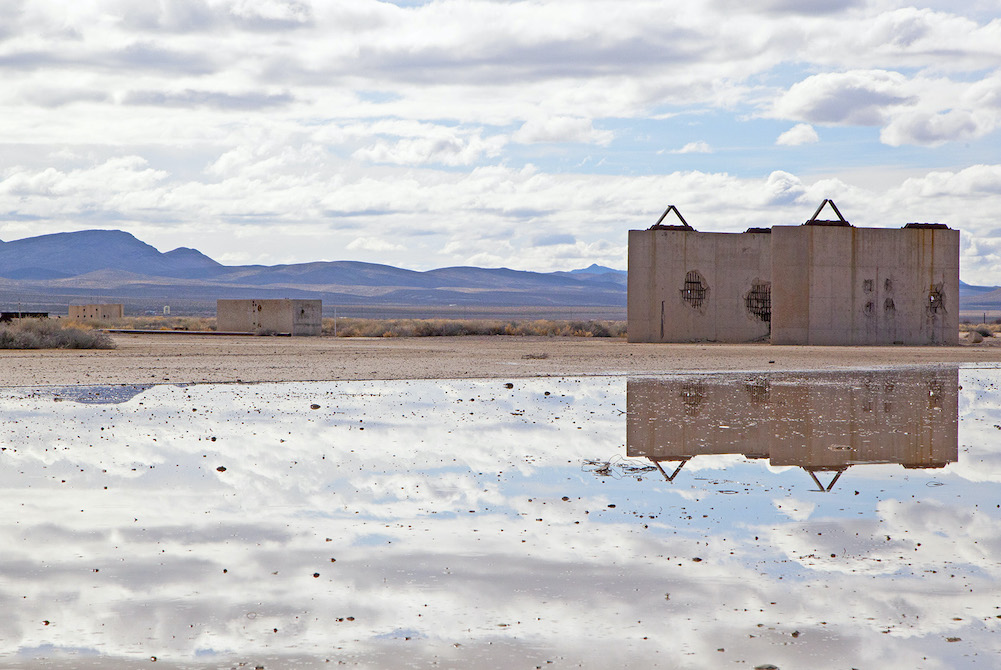 Editor's note: On Oct. 15 in Brunswick, Georgia, Jesuit Fr. Steve Kelly was sentenced to 33 months in prison for his actions as part of the Kings Bay Plowshares 7, a group of seven Catholic peace activists who broke into a nuclear submarine base in Georgia in 2018. Kelly has already served 30 months and 10 days. He said "Thank you" to the judge, following her sentencing of him. Plowshares member Patrick O'Neill is scheduled to be sentenced on Oct. 16.

Four years ago about this time in October, Jesuit Fr. Stephen Kelly celebrated Mass for a national gathering of Catholic Workers that had just ended in Las Vegas. The celebration did not occur at a church, but on sacred land stolen from the Western Shoshone Nation 70 years ago by the U.S. government for the testing of nuclear weapons, now known as the Nevada National Security Site. Nowhere else on Earth has suffered so many nuclear detonations. With the permission of the Western Shoshone National Council, the site has also been a place of worship, penance and of nonviolent resistance for many years.

Liturgical celebrations out in the windswept desert must be less formal than those performed in cathedrals and basilicas, and this Mass was no exception. For an altar, a card table was set up, covered with a cloth and set with ceramic cups and plates, bread and wine, and from past experience we did not expect Steve to put on the vestments that Church rubrics require for a priest celebrating the Eucharist. Still, it was a surprise when, in place of the obligatory alb, stole and chasuble, Steve took from his bag an orange jailhouse uniform for his vestment.

Steve apologized for any misunderstanding or offense. His intention was not disrespect for tradition, nor to call attention to himself. He briefly explained how the traditional Catholic priests' vestments evolved from the dress of the Roman ruling class of Jesus' day and that in this place, on this occasion, remembering the conditions surrounding Jesus' death and his last supper before his arrest, it was more fitting for the celebrant to be dressed as a prisoner. 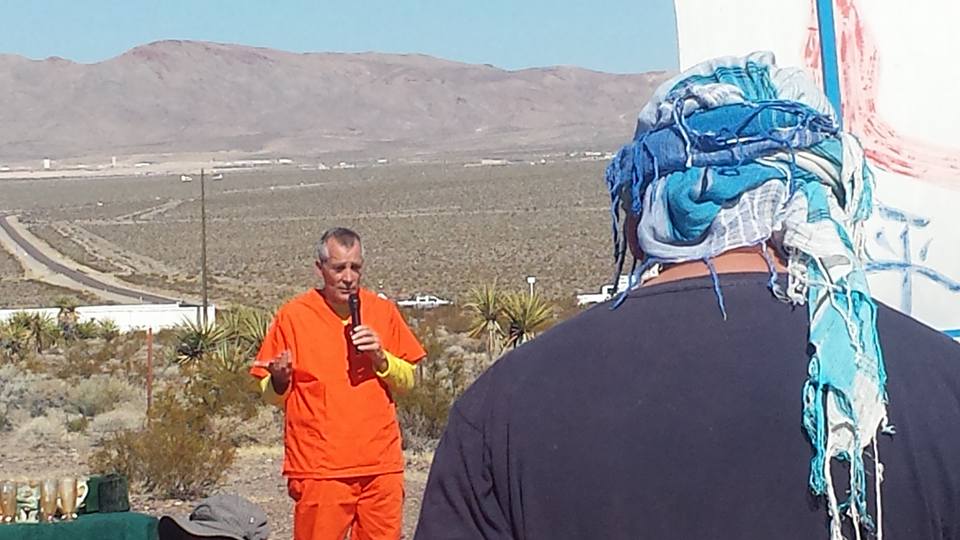 About the history of the vestments Steve didn't wear that day, The Catholic Encyclopedia agrees: "The Christian vestments did not originate in the priestly dress of the Old Testament; they have, rather, developed from the secular dress of the Graeco-Roman world." This encyclopedia entry goes on to state that "the priest who was clothed with these was regarded as typifying the suffering Savior." Despite their secular origins, on Holy Thursday, 2007, then Pope Benedict XVI emphasized the significance of those vestments, "the fact that we are standing at the altar clad in liturgical vestments must make it clearly visible to those present that we are there 'in the person of an Other.' " The priest stands not for himself, but in persona Christi, in the person of Christ, the pope said, and "the Church has also made this reality of 'new clothes' visible and comprehensible to us externally through being clothed in liturgical vestments."

Not enough that a priest must be of Jesus' gender, it seems a strange proposition that the person of Christ, the suffering Savior presiding at the sacrament remembering Jesus' last meal with his disciples and his death on the cross, is typified and especially made "visible and comprehensible to us" by a man outfitted like Pontius Pilate and not, for example, by someone wearing a carpenter's overalls, a fisher's raincoat, a nurse's scrubs or even a prisoner's stripes.

One cannot say, though, that Jesus was never garbed in finery and the Gospels do record one occasion, at least, when he did dress the part of a noble gentleman. His torturers, Matthew reports, "stripped Him and dressed Him in a scarlet mantle; and plaiting a crown of thorns they placed it on His head, with a cane in His right hand. Falling on their knees before Him they jeered at Him: 'Hail King of the Jews!' They spat on Him and used the cane to beat him around the head. When they finished their mockery, took off the mantle and dressed Him in His own clothes. Then they led Him away to be crucified" (Matthew 27: 27-32a).

Many priests and bishops wear the prescribed vestments simply because it is the thing that is done, and some priest friends I know dress up with great discomfort and only in situations where they can't avoid it. Some priests may actually believe along with the pope emeritus that they look more like Jesus to their congregants when decked out like feudal lords. I confess, though, that I perceive a not-so-subtle mockery of Jesus and his poor when the likes of Cardinal Raymond Burke parades for the entertainment and edification of the rich in his 39-foot-long scarlet mantle (Matthew does not tell us, but I am confident that Burke's watered silk cappa magna has the mantle that Pilate's soldiers loaned to Jesus beat by 10 yards, at least), lace slip and ermine collar. Robert Coles, one of Dorothy Day's biographers, quotes her saying, "When I see bishops living in luxury and the poor being ignored or thrown crumbs, I know that Jesus is being insulted, as He once was, and sent to His death, as He once was."

Unlike Burke's scarlet silk get up, Steve Kelly's orange polyester is not a theatrical costume, and he comes by it honestly. Steve has spent more than 11 years wearing the khaki or orange habit of a prisoner, all for participating in communities of nonviolent resistance to war. Since April 4, 2018, the 50th anniversary of the Rev. Martin Luther King's assassination, Steve has been in the Glynn County Jail in Brunswick, Georgia, for a protest with six others at Naval Submarine Base Kings Bay, the Atlantic home port of the Trident submarine.

Among Catholic Workers, many are not Catholic and there are also all kinds of Catholics. It is possible that some of us there in the Nevada desert on Oct. 9, 2016, took offense at Steve's noncompliance with the rubrics and would have been happier with a more correct and conventional Mass to celebrate the gathering of our community. If there were any such, they were politely quiet. About John the Baptist, who preached in the desert wearing a "rough coat of camel hair," rather than clad in an ephod in the magnificent glory of the Temple, Jesus asked, "What was the spectacle that drew you into the wilderness? A reed-bed swept by the wind? No? Then what did you go out to see? A man dressed in silks and satins? Surely you must look in palaces for that" (Matthew 11:7-9).

("PALACE — noun: A fine and costly residence, particularly that of a great official. The residence of a high dignitary of the Christian Church is called a palace; that of the Founder of his religion was known as a field, or wayside. There is progress."  From Ambrose Bierce's Devil's Dictionary, 1911)

When the Mass was finished, part of the congregation processed over the cattle guard and into the test site where we were immediately abducted by Nye County Sheriff's deputies and officers of the National Nuclear Security Administration. After a short detention, we all headed down the road to Creech Air Force Base, center for the CIA drone assassination program, where many of us were arrested again, taken in chains to Las Vegas, singing and praying as we were processed through the jail and released by increments through the night. For many of us, anyway, the entire day was one unbroken act of Communion.

In October four years ago, hundreds of Catholic Workers and fellow travelers converged on Nevada from points around the globe. "What was the spectacle that drew you into the wilderness?" Jesus once asked. If it was a spectacle we wanted or to gawk at stylish celebrities, we could have stayed in Las Vegas. We went into the wilderness because the wilderness, anywhere far from the pomp, style and showmanship of the palace and the campaign, is where the truth can be heard. It is where the truth can be spoken. Especially now in this most dangerous of times, the voices we desperately need to hear are those of the margins and only rarely the voices spoken from palaces and pulpits of the well-heeled and well dressed.

[Brian Terrell is a longtime activist and lives on a Catholic Worker Farm in Maloy, Iowa.]

Read this next: Trials of Nonviolence Episode 1: 'We come in peace'