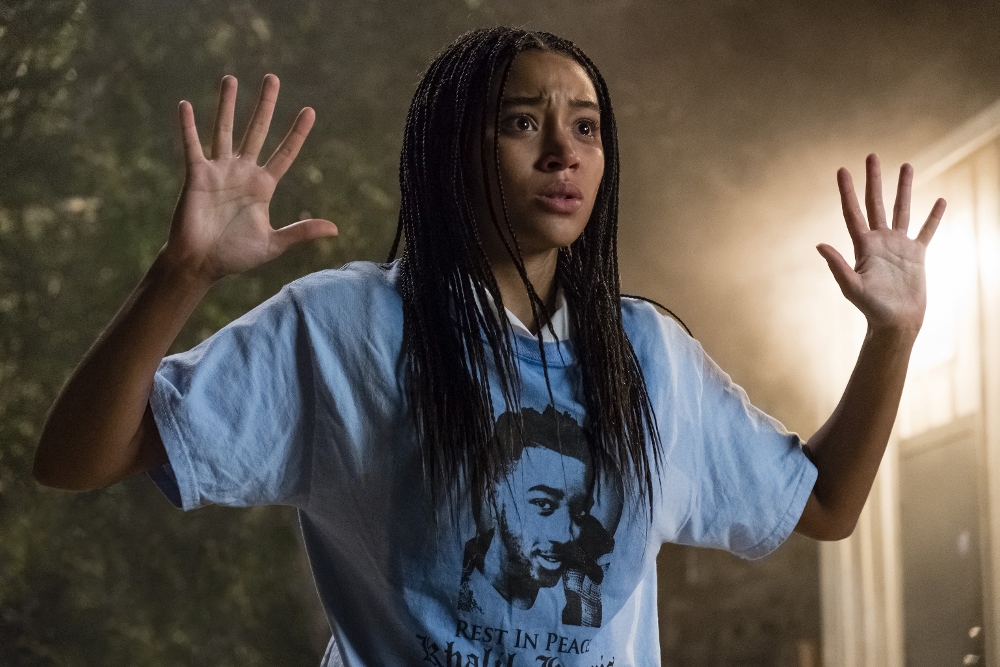 In the new film "The Hate U Give," 16-year-old Starr Carter (Amandla Stenberg), her older half-brother, Seven (Lamar Johnson), and their little brother, Sekani (T.J. Wright), attend a predominantly white prep school about a 45-minute drive from their impoverished neighborhood that is rife with gang activity.

Their mom, Lisa (Regina Hall), is a nurse who is committed to making sure that the children will grow up with the best opportunities for success. Their dad, Maverick "Mav" Carter (Russell Hornsby), is an ex-con who owns and operates a convenience store. He is just as concerned that they grow up alive.

This film is based on the 2017 best-selling young adult novel of the same title by Angie Thomas. The title is from rapper Tupac Shakur's "Thug Life": If you teach hate, and treat people in hateful ways, this will affect children in ways that do harm to everyone.

The film opens with Mav lining up the kids in the front yard and making them commit to the Black Panthers' Ten-Point Program, especially No. 7, which calls for an end to police brutality. He is giving his children "the talk" — what to do to survive a stop by the police.

Starr seems to like her school and has a small group of friends and a boyfriend, Chris (K.J. Apa). Yet she lives in an identity crisis limbo, speaking one way at school and another way in the neighborhood, listening to different music and moving back and forth between school friends and friends at home and church.

Starr is at a party talking with her oldest childhood friend, Khalil (Algee Smith), when someone fires a gun. They run to his car to get away. Once away from danger they begin to reminisce about their childhood, watching "Harry Potter" movies, and how much they missed their friend Natasha. She had been gunned down by a drive-by shooter when they were playing together. She was 10 years old.

All of a sudden, they hear a police siren. A white cop pulls them over. Khalil demands to know why as Starr yells at him to obey the cop. She is shocked that Khalil doesn't seem to know what to do. He gets out of the car as commanded but doesn't stay still when the cop goes to run his license. The cop yells at Khalil to put his hands up, but he has reached inside the car to grab his hairbrush. When he moves, the cop shoots and kills him. Starr, in shock, is the only witness.

The story makes national news. Not only is another unarmed black male shot by a white policeman, but the media makes it seem that Khalil probably deserved it because he was known to sell drugs, even though no drugs were found on his person or in the car. He also had a known affiliation to a local gang led by King (Anthony Mackie).

As a minor, Starr is not identified by the news. She is a silent and secret witness in the weeks that lead up to the grand jury hearing that results in Officer 115 being arrested and charged. As tension grows, Starr is more aware than ever of being caught between her two separate identities and worlds that define her.

When King and his gang discover that Starr is the secret witness and may implicate them, they break the windows of the family home and threaten more violence should she speak. Starr's Uncle Carlos (Common), a career cop, invites the family to stay with them in a better neighborhood where they will be safe. But only Lisa, Starr and Sekani go; Mav and Seven stay at home to guard the house.

Meanwhile, a social activist, April Ofrah (Issa Rae), tries to convince Starr to come out of hiding and march for justice for Khalil, but Starr and her family resist. As events move forward, Starr must make a decision.

Director and co-producer George Tillman Jr. elicits strong performances from the ensemble cast, and screenwriter Audrey Wells is faithful enough to what has become a beloved young adult classic. Through this masterful interpretation of the novel for the screen, the audience hears Starr's voice clearly and walks her social, cultural, family and faith journey with her.

"The Hate U Give" reminded me very much of Jordan Peele's 2017 Oscar-nominated film "Get Out," in that these films and their makers are able to let their audiences see and experience the lives of black people in the United States today. A perfect example of this is the idea of "the talk." For white people like myself, "the talk" is about sex, right? I wanted to make sure, so I posted this question on Facebook and tried not to lead in any one direction:

About 16 people replied; none was African-American and one was Latina. They all replied, in one way or another, that "the talk" was about sex. A few days later I messaged all of these same people: "What would you say if I told you that for black families in America 'the talk' is not about sex (as your responses reflected) but about how your kids can stay alive if stopped by white police officers? The upcoming film 'The Hate U Give' expresses this well (as did the audience and producers at the screening I attended)."

My Latina friend replied that she assumed I was asking about the sex talk but that as a kid she had been given that talk about how to survive a police stop. Others said they could not imagine how black families feel in this situation. Most quietly left the conversation without comment. I admit, I had no idea that black parents gave their children a different talk than the one I received. In this film, I saw my own white privilege reflected back to me.

Following a dominant theme of father-daughter relationships in 2018 films, "The Hate U Give" focuses on this as well. But if I could give a "Movie Father of the Year Award," I'd give it to Hornsby as Mav Carter. He is buff, tattooed and hard-working. He deals with the shame of his prison time and the gang members who won't leave him alone, but he is a proud and loving husband and father who wants to do the right thing and does it.

This is not to take away from Hall's performance as one of the few mother characters in films this year; she is a mother tiger and earns our respect and admiration.

Sternberg is a talent to watch; the camera loves her. In their brief screen time together, she and Smith's sweet chemistry makes the loss of his character all the more tragic.