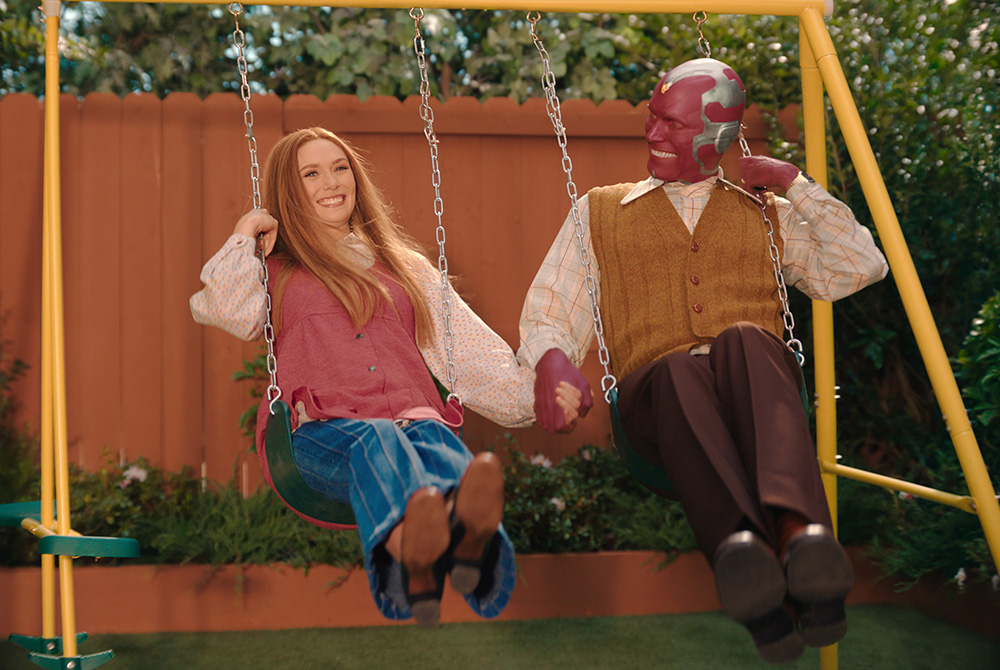 Watching "WandaVision" was not one of my Lenten promises. But now that the series is over — and I've seen how it all plays out — I wonder if it should've been.

The real villain of "WandaVision" could not be punched, pummeled and zapped away. The Disney+ show's real villain, and Wanda's enemy, was grief.

We conclusively learned in the penultimate episode that it was a grief-stricken Wanda — devastated, and rightly so, over the tragic loss of her partner, Vision — that created the illusion that overtook Westview. Without the opportunity to process, her grief got the best of her. It took control of her, bending her powers in ways she hadn't yet imagined possible. Ultimately, her grief seduced her into creating, believing and sustaining a lie.

Were it not for the interruption of those more traditional villains and the determination of Capt. Monica Rambeau, Wanda may have continued living that fantasy. And in so doing, she would have perpetrated untold harm on the countless other lives trapped in her world.

The conclusion of "WandaVision" — the building up and subsequent tearing down of this protective bubble that guards against grief — has refocused my reflection on my pandemic bubble. Indeed, there are some parallels between my life and Wanda's. Perhaps you see them in your life, too.

A tremendous global disaster — akin to the slow snap of Thanos' fingers in "Avengers: Infinity War" — has driven my family and me to seek shelter, to create a new way of living against the backdrop of so much death and suffering and uncertainty. My wife and I try to maintain some degree of normality for our two young daughters, one of whom knows no other way of life. My youngest, born during the pandemic — a kindred spirit to Wanda's children — cries at the sight of strangers, seemingly surprised that there are other people in the world beyond the threshold of our doorway.

I've encountered my inner demons, too, during this time. They aren't as clearly seen as the red glow of Wanda's growing powers, but they can be just as destructive. Impatience becomes an unkind word to my wife. Selfishness becomes an irritation with my children. Exhaustion becomes numbness toward the needs of others. Like those innocent inhabitants of Westview whose lives became entangled in the unexamined grief of Wanda, I, too, risk hurting others if I don't take time for self-care and self-reflection.

Finally, I wonder how many of us fear what is on the other side of our self-enclosed pandemic worlds. When I emerge, it will become that much clearer the hole left behind by the deaths of both of my grandmothers. I will see — at family gatherings and holidays — that they truly aren't there. It's not just that they didn't get to the phone in time or forgot to put a birthday card in the mail. I will need to fully process these losses, likely in ways that account for the paired-down funeral services offered in their memories. I imagine this kind of grief, this kind of loss — the very same that drove Wanda to the events of "WandaVision" — haunts so many of us all around the world.

What does Lent have to do with any of this? Lenten spirituality — built upon prayer, fasting and almsgiving — calls us to let go, to loosen our grips on those things we cling to and instead enter into life's hardships and joys with open hands, open arms. We fast so that we practice this self-emptying; we give alms so that we become accustomed to training our eyes on the needs of others.

Our grief and pain are significant, and we do not need to process either alone. So many of us are journeying through suffering right now. If we make room in our hearts for another's journey, perhaps we can share that grief. Maybe we can allow it to help us learn something about ourselves, our world, and then let it go.

Perhaps doing so will help us avoid the kind of self-inflicted pain Wanda found herself trapped within, the type of fantasy world that distracts but does not heal and that ultimately leads only to harm.

At the end of "WandaVision," we watch a still grief-stricken Wanda take down the walls she'd erected. She has nothing to do but stare at her grief — and the hole it's created in her life — square in the face. And, as we see, she still doesn't know what comes next.

The final scene is that of Wanda — the Scarlet Witch — alone in a cabin in a far-off place. The grief is still there, clearly, but she's seen it for what it is. It no longer controls her life — at least, so far as this story is concerned — and she's slowly trying to understand what comes next for her.

So must it be for us. That's the story of Easter. After that arduous journey through grief, our God of surprises plants a seed of hope. And we embark on a new path.